The Archos 70 is the little brother of the Archos 101, another
Android tablet we reviewed recently. Like the HTC Flyer and Samsung Galaxy Tab, this has a 7in
screen device, but unlike those grand débutantes of the terribly trendy tablet
scene the Archos 70 will leave you change from £200. The market’s already
packed with poor-quality Android tablets though, so will this budget number be
just another one for the slag heap?

The Archos 70 is a largely plastic tablet. If it looks
curiously familiar, it may be because you’re familiar with Archos’s 7 Home
Tablet, released last year. It’s the direct successor to that cheaper gadget,
bumping-up the CPU from a 600MHz model to a 1GHz chip and running Android 2.2
FroYo rather than the now-aged Android 2.1.

In a rare move for an Android device, a 250GB hard drive
edition of the Archos 70 is available alongside the flash memory 8GB and 16GB
options. The model we looked at was the lowly 8GB edition, but if you’re out
for a bargain basement tablet, this is likely to be the one you’re eyeing-up
anyway.

Aesthetically the Archos 70 is a scaled-down version of the
Archos 101. Its front features two shades of grey, a shiny screen surround and
a more textured finish for the edges, which function as hand grips. In-laid
into each of these grips are holes for the sound of the stereo speakers to
escape out of. At maximum volume, they provide enough clout to watch some video
in bed happily but they can’t contend with much ambient noise. Naturally,
there’s a 3.5mm headphone jack on its body that can also be used as an
output for external speakers.

This sits on the left edge of the Archos 70, when held in
the standard horizontal position. Alongside it are the microUSB, microSD and
miniHDMI ports, along with the power jack. The only other physical controls are
on the other side of the device – where the volume and power buttons live.

Although the design is more utilitarian than stylish, the
Archos 70 is impressively slim. At 10mm thick it’s thinner than both the
original Apple iPad and the Samsung Galaxy Tab. Weighing-in at just 300g too, one-handed operation is no
problem, although the design positively encourages two-handed
“sideways” operation.

These numbers sound impressive, but the Archos 70 lacks the
cohesive build of a more expensive tablet. The reams of seams, the mix of
plastic and metal construction – a brushed metal panel makes up the most part
of the back – and a lack of flair ensure that it’s simply not as desirable as
some more expensive rivals. But as it could save you £400, the sacrifice may be
worth it.

Some of the body elements that compromise its looks come in
handy too. The rubber feet on the back will help to avoid scratches to the
backplate and the flip-out stand is useful for movie-viewing. It’s made of
fairly flimsy plastic though, which is disappointing when the Archos 101 uses a
much stronger metal alternative. The general build quality is good – leagues
above the creaky Archos 70b eReader – but it’s just rather uninspiring.

The Archos 70 runs Android 2.2. It’s not the latest version
of Google’s OS, but it is still the newest version that’s commonly available.
More expensive rivals due out soon will use Android 2.3 Gingerbread or Android
3.0 Honeycomb though.

The difference? Android 2.2 was designed with smartphones in
mind, not tablets, where later versions of the OS are made with more awareness
of the tablet market. Android 3.0 Honeycomb in particular was made precisely
for these mid-size devices. 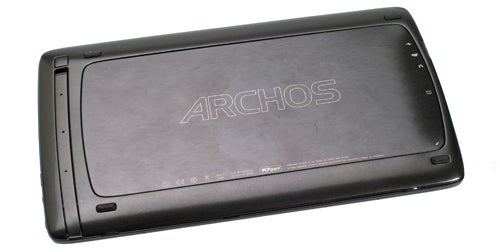 Evidence of this smartphone mis-match lingers in the Archos
70. Occasionally, notifications will pop up referencing the device as a phone,
as if it’s having an identity crisis. Archos has done its best to transition
Android’s gender change from smartphone to tablet, grafting-on a custom user
interface. It’s very simple, its main aim to make holding the thing in
landscape orientation feel right when the vast majority of Android 2.2 gadgets
tend to be held upright.

The user interface does this with a thumb-operated side menu
that stays on-screen whether you’re on a home screen, within the apps menu or
in an app. It bows out when a video is displayed full-screen, but it’s
otherwise a constant companion – a replacement for physical soft keys. 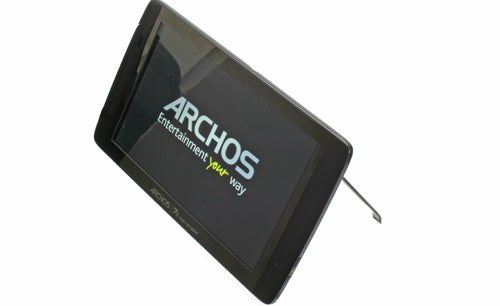 It functions very well, auto-rotating depending on how you
hold the Archos 70. As the main component of the user interface, there’s not
been as radical a change from vanilla Android here – especially in looks – as
in many Android smartphones. However, when some manufacturer-made UIs can make Android
worse, we inclined to think this minimalist approach is a good thing.

However, in spite of packing a fairly powerful 1GHz ARM
Cortex A8 processor, day-to-day navigation isn’t lag-free. Android 2.2-powered
smartphones with 1GHz processors like the HTC Desire run very fast thanks to the level of
optimisation of the OS, and by comparison the Archos 70 seems slightly
sluggish. However, it is more responsive than the larger Archos 101.

We talk as folk who have thumbed one-too-many Android
devices to be particularly patient with lag though, so if you haven’t been
similarly spoilt the slight blips and stops of the Archos 70 may not annoy.
It’s possible that Archos will improve speed with a software update, although
updates to most of Archos’s devices of the past couple of years have tended to
offer minor tweaks rather than anything ground-breaking.

The Archos 70 isn’t equipped with the Android Market from
scratch – it’s another effect of running a smartphone OS on something that’s
not a smartphone. Instead you have the AppsLib, Archos’s own app store. It
features essentials like Flash Player, required to unlock Android 2.2’s full
Flash 10.1 support, Opera Mobile and Angry Birds Rio, but compared to the full
Android Market it’s understocked.

Apps and games are split into 14 categories, making browsing
through them fairly easy. Some of the most glaring omissions are Google’s own
apps, such as Gmail and Google Maps, which are all-too easy to take for granted
as a previous Android OS-user. There’s an easy solution to the problems of
limited app selection though – ArcTools. This app, available from AppsLib,
installs both the Android Market and a handful of Google apps including Maps
and Navigation. 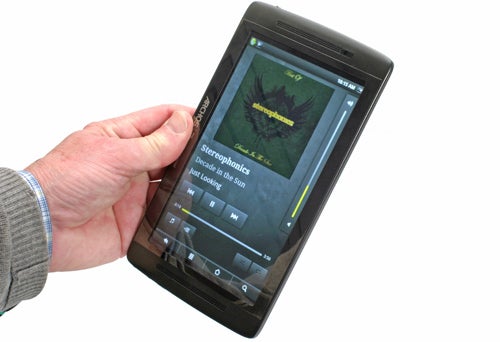 Do this and you’ll have access to thousands of additional
apps – and as the 800×480 pixel screen is an Android smartphone standard you’ll
encounter few problems. The lack of internal GPS and cellular functionality
will restrict some apps, but the majority simply work – in spite of the Archos
70’s non-smartphone status.

The user-facing camera comes in handy with apps too, if
primarily with more light-hearted photo manipulation bits of software. With a
low-powered 640×480 pixel sensor, any results aren’t going to be worth taking
off the tablet and printing, but then the camera is a tertiary feature of the
device.

One of its primary features is web browsing. With Wi-Fi
built-in the Archos 70 is web-ready and the responsive capacitive touchscreen
makes browsing a joy. The built-in web browser is decent, but others are
available from AppsLib including Opera and Dolphin. The 7in form factor is
perfect for web browsing too, giving the reading of articles online that hint
of book-like feel – more so than a 10in tablet. Unlike the Archos 101, the 70
feels natural when held upright like a book – the 101 is (and other larger tablets like the iPad are) just too unwieldy. 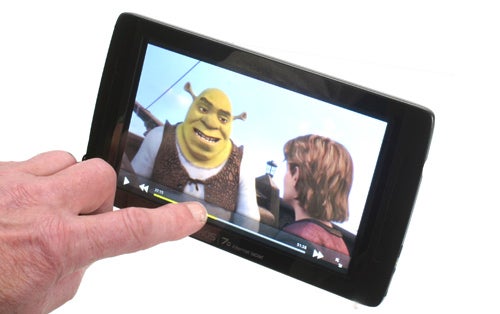 Sensibly, Archos chose not to weigh-down the Archos 70 with
too many dedicated apps. We’ll cover the video player later, but the others are
vanilla solutions for basic features like email and music-listening. It has a custom UI, but the personality of the player is something for you to dictate.

In our battery tests, the Archos 70 didn’t quite
achieve the claimed 7 hours for video, but it didn’t do badly. With Wi-Fi
enabled and brightness set near to maximum (around 85%) the tablet kept on
pumping-out video for five hours 21 minutes. Reduce brightness and switch Wi-Fi
and you should be able to reach Archos’s claimed 7-hour figure. We’d rather
sacrifice some longevity though, as a fairly high brightness setting is needed
to avoid dull-looking images – this isn’t a particularly bright screen.

The 16:9 widescreen, light weight and decent battery life of
the Archos 70 make it a good candidate as an on-the-go media player. Archos’s
product line history is firmly rooted in this territory too, having produced
many of the most popular personal media players including the classic Archos
605.

Built-in video codec support is excellent, with the staples
of DivX, Xvid and MKV on-board. It won’t play MKV videos of huge 1080p
resolutions, but you won’t need to spend hours converting your whole video
library here, as you might have to do with an Apple iPad. The video player software
isn’t so accomplished though.

The interface is functional, letting you browse the video
folder within the internal memory or stream video over SMB (Samba) and UPnP,
but it looks ugly, failing to pull off the classy stone-textured look it
strives for. Playback quality is a little disappointing too, given Archos’s
video heritage. 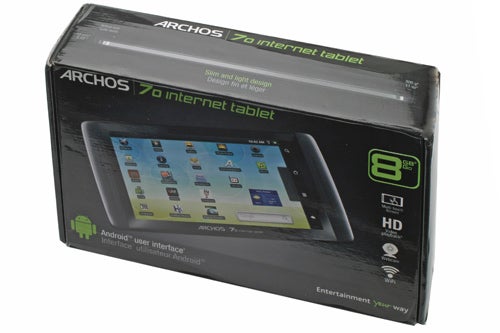 The 1GHz processor pumps-out 720p and DVD-quality video
smoothly, but there’s not much processing going on in the background to improve
image quality of lower-bitrate sources. Consequently, digital artefacting and
colour banding will be quite visible unless you maintain a decent level of
quality in your videos. That said, 7in is a great size for portable
video-watching, offering a good compromise between screen size and portability.

Poor viewing angles also threaten to ruin the party.
When the Archos 70 is tilted back – as you would holding it naturally – image detail and contrast is quickly lost with
the brightness all-but sucked out of the screen. This viewing angle issue is
common to many Archos devices, as they’re not known for packing the best quality screens. This doesn’t happen when the tablet is tilted
the other way, forwards, making us wonder why Archos opted for this panel
arrangement.

There is thankfully a work-around. Turn the Archos 70 upside
down and wait for it to auto-rotate before opening the video-player app and you
can watch videos rotated 180 degress – thereby reducing the viewing angle issue
when the device is held up by your face or down by your knees when seated.

It’s a compromise, but one we’re ready to forgive at the
price – you’re not going to see an IPS-screen tablet for under £200 any time
soon (that said, the IPS-screened Nook Color is available in the US for $250).
The Archos 70 doesn’t have a superb-quality panel, with limited resolution,
middling brightness and limited viewing angles, but it’s a cut above the model
used in the Archos 101.

The surface is highly reflective though, so using it outside
in bright sunlight is tricky, especially if you’re not enamoured with your own
reflection. When at home, you can dump the built-in screen altogether, by
hooking the tablet up to an HD television using the mini HDMI port. There’s a
widget pre-installed that switches the display to a TV with a tap on the
touchscreen too.

Getting the best out of the Archos 70 requires a tweak or
two to both the device and how you use it. You won’t need to resort to such
measures if you’re willing to splash out £599 on an HTC Flyer or £329 on a
first-gen iPad, but for its sub-£200 price, the Archos 70 makes for a worthy budget option.