It is time to admit it. Whether you bought your iPhone or iPad because your friends have one or you bleed white when cut, the sixth generation software of Apple’s iconic handset looks worryingly long in the tooth. iOS 7 needs to do something special.

If you can’t admit it, don’t worry, Apple already has.

Last October the company fired Scott Forstall (pictured below), the head of Siri and Apple Maps development which were the two headline features for the iOS 5 and iOS 6 launches respectively. “Scott got what he deserved,” said Tony Fadell, the former senior vice president of Apple’s iPod division. 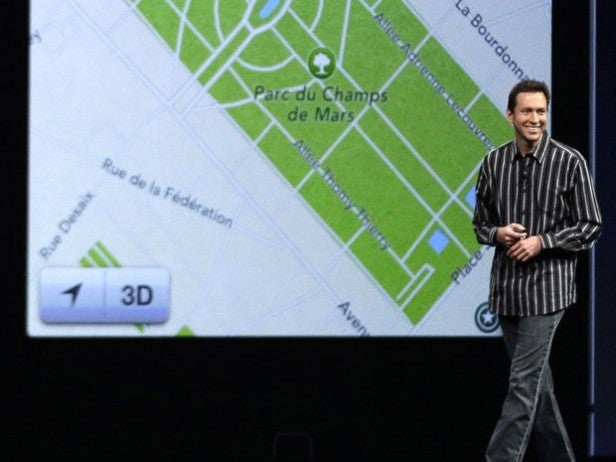 By contrast Google’s famously functional ugly duckling Android has grown into a swan during iOS’s troubled times. The influence of former WebOS design genius Matias Duarte is now unmistakable as it leaves the once beautiful, now dated skeuomorphism of iOS behind.

Furthermore, game changing new functionality such as Google Now and Google Voice Search have seamlessly built upon the rock solid core of Gmail, Google Maps and the Chrome browser without any of the drama witnessed at Cupertino.

The trouble is this makes us uneasy. While we are thrilled Android is blossoming, as its primary rival we would like to see Apple spice things up a bit with more than the promise of a cheap iPhone to attract new customers.

Furthermore with Android 5.0 ‘Key Lime Pie’ expected to be unveiled ahead of iOS at Google IO in May it is time Apple and iOS 7 got their mojo back before that gap grows even wider.

User Interface
Enough already. We know there is comfort in the familiarity of the iOS homescreen, but there is also no flexibility unless you define that as “apps in folders” or “apps out of folders”. With iOS 7 Apple must finally embrace ‘’dynamic content’’ as seen in both Android and Windows Phone. Mainstream consumers may be happy with grid after grid of icons, but the ability to insert larger widgets for at-a-glance information for things like calendars, to do lists, notes, core settings and weather is years overdue.

Equally is the option to ‘’hide apps’’. The opportunity to delete Apple apps has long been a staple of message boards, but with Apple unlikely to entertain that the Android-like ability to keep apps off the homescreen is vital. Imagine Windows or Mac OS forcing you to display every programme on your desktop, it would be chaos yet this is what Apple currently expects iOS users to do.

With Jonathan Ive now heading up software as well as hardware design, expect iOS 7 to get a significant visual makeover so we won’t waste time ranting about skeuomorphism (Ive is well known for his dislike of it). Instead more visual care needs to go on navigation. ‘’Switching between apps’’ should present us with more than four icons at a time (at least make it eight or twelve, if not an actual thumbnail or cards system akin to the App Store) and the ability to ‘’change default apps’’ is fundamental.

Apple may not want users to be able to ditch Apple Maps so easily, but until it proves more worthy of our time switching the default maps app for links to Google Maps should be an option. The same goes for any smart linked information such as browser URLs and phone numbers as well as tighter third-party email integration and switching the default music playback app.

Multitasking
‘‘Smart functionality’’ is the name of the game here. As it stands iOS makes its owners work too hard. New podcasts, RSS and app updates and any form of third party app synchronisation is currently a manual process. It all turns into a real chore requiring users to perform constant maintenance: want to listen to a new podcast on the plane? Did you remember to open the app and wait for it to download first? 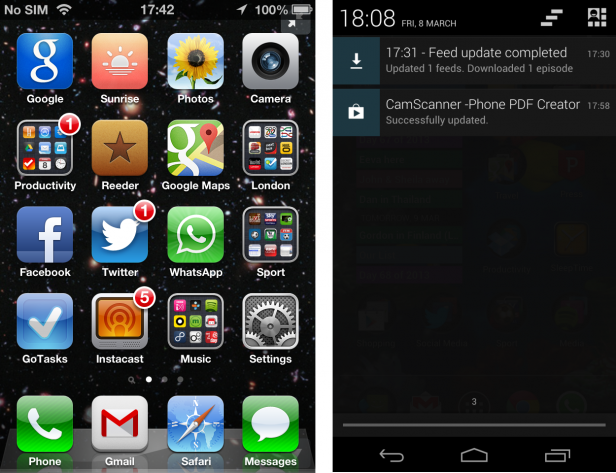 It is worse still with uploading information. If you were uploading images to Dropbox, video to YouTube or Facebook you need to keep the app open and stop the screen from locking until it finishes as iOS limits these functions to just five minutes of background operation before they expire.

It’s time to get smart.

Android has long performed all these tasks automatically, as does the new BlackBerry 10 platform. As such notifications are not for what you need to do (or remember to do), but for what has already been done: these apps were updated, these new podcasts were downloaded, these photos and videos were uploaded.

The trouble is that for iOS 7 to achieve this requires an entirely new approach to how it handles multitasking with much wider permissions required (only GPS, music and push notifications get unbridled background functionality at present). There would also inevitably be a major battery hit which arguably existing iPhones in particular couldn’t afford.

Anticipation
Multitasking limitations also create a wider shortcoming in iOS: ‘’Anticipation’’. Right now iPhones and iPads work well when they are specifically asked to do something, but they don’t anticipate your needs.

For Android the arrival of Google Now has been a seismic step forward in this regard, automatically collating your email, calendar, travel, weather data and more into a single dynamically updating stream. As such instead of a basic notification that your meeting starts in an hour you will see your meeting information, the anticipated weather at the destination and below it route information and estimated travel times based on current traffic.

Crucially, Google Now is also location aware so opening it beside a bus station shows bus times, ditto train times at stations, relevant boarding passes at airports and reservations on arrival at a hotel. If iOS 7 is to lead another iOS revolution it needs to anticipate our needs not just react to them and leave us flailing between disparate apps.

iOS 7 must lift this restriction so increasingly powerful apps have true interoperability to save users time and become more efficient. Notably with Microsoft Office said to be heading to both iOS and Android, the inability of the suite to work together on iOS will be a major shortcoming. There would be further benefits for Apple as well since it would pave the way for deeper Siri integration and even uptake of the likes of Swiftkey’s superb third party keyboards. 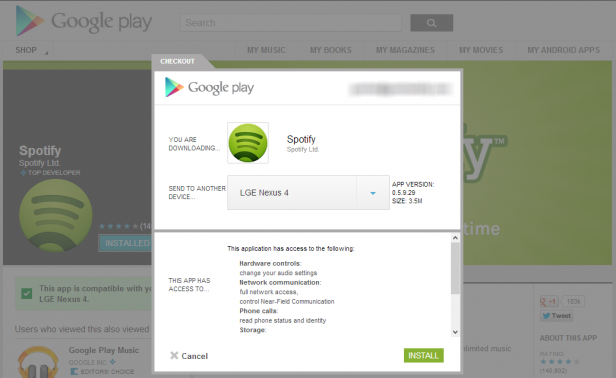 Likewise the connection between iTunes online and iOS devices can be handled better. Browsing Google Play with a web browser is a joy and apps and content can be purchased, and automatically downloaded to your Android devices. There is no clear equivalent in iTunes, with the browsing experience always directing users back to the software installation. With even Spotify now allowing a browser-based service experience, iTunes needs to follow suit.

Apple must also improve the interoperability of the iOS Notification Center with the rest of the platform. Dismissing alerts here should dismiss the numerical notifications positioned on apps and similarly accessing those apps should clear the notification centre. The disconnect here is jarring and time consuming.

Pros and Cons
For some the list should be longer, for others the concerns listed here may be no big deal, but we could go on. Similarly there are numerous calls for better battery management, additional functionality to the the email client and much needed upgrades to Apple Maps – but since they are inevitable we have left them out.

That said, this list as a whole is not to make a punching bag of iOS. It paved the way others have followed, but needs an intervention to further raise the profile of crucial improvements Apple needs to make. Jonathan Ive’s tasteful influence will surely come, but come launch time we need more than that.

Furthermore, should Apple properly rejuvenate iOS it still carries crucial differentiators rival OSs cannot match. Compared to Android it is essentially fragmentation-free and apps containing malware rarely make it past the App Store gatekeepers. Compared to Windows Phone and BlackBerry, iOS has an unassailable lead in apps and vastly superior market share and brand awareness. It is time Apple remembered how to fight outside of a courtroom…