Everything we know so far about Star Wars: Battlefront

Originally announced back at E3 2013, the information about Star Wars: Battlefront has started coming in thick and fast since the game was given a worldwide reveal at the Star Wars Celebration in April.

Technically Star Wars: Battlefront 3, the game is the third in the series but it’s the first to be released since publisher Electronics Arts obtained exclusive rights to develop Star Wars games for consoles and PC.

The game is in development at DICE, with potential input from other EA subsidiaries Visceral Games and BioWare.

Rather than doing Battlefront 3, though, EA Games and DICE have decided to give the series a reboot, offering gamers a taste of what came before but through a fresh lens. 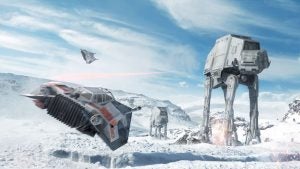 Star Wars: Battlefront Release Date – When is it coming out?

In April, EA Games confirmed that the Star Wars: Battlefront release date would be November 17, 2015 in the US and November 20, 2015 for the UK and Europe.

The game will be available on PS4, Xbox One and PC (via EA Origin) when it’s released later this year. 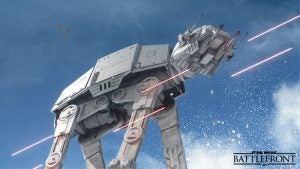 Star Wars: Battlefront News – What do we know so far?

PC specs could be similar to Battlefield Hardline
Although EA Games and DICE aren’t in a position to give us locked-down minimum and recommended PC specs for Star Wars: Battlefront, there are definitely a few hints floating around.

“With the Frostbite engine and the inclusion of full PBR, the game isn’t just like Battlefield Hardline or Battlefield 4. Once the team has the game into its Beta phase, they can start testing the game on 100s if not thousands of PC systems and find the minimum spec required to run the game,” explained an EA Community Manager on Reddit.

“Being a fairly hardcore PC gamer, I want to know the specs as well. But… my PC is powerful, so not worried. But I know you guys are and want to get you that info as soon as we can.”

Just for reference, we’ve provided the Battlefield: Hardline specs below: 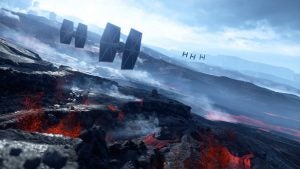 What the publisher is saying, though, is that it’s aiming for a buttery-smooth 60fps framerate for the game across all platforms.

“No-one has said anything about resolution,” said an EA Games Community Manager on Reddit  in response to a fan’s mention of 900p and 720p. “If you have heard anything else, it’s a rumour. We have only confirmed the game will run at 60fps.”

In an IGN interview, DICE Executive Producer Patrick Bach revealed that you won’t be able to aim down your ironsights in Star Wars: Battlefront.

There’s no word as yet whether the lack of ironsights will extend to the multiplayer portions of Battlefront, as usually these scopes help improve accuracy and stability.

“We’re not taking into account what we’ve done before, because I think that would be disrespectful to the fans, and to what we’re trying to achieve here. A lot of the things you saw in the game have nothing to do with anything we’ve done before. Some features of course resemble [our other shooters], because we want to make the best possible shooter, but in general we’ve tried to do something completely unique.” 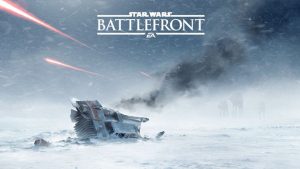 At the moment, we’ve only seen snippets of Star Wars: Battlefront gameplay, but EA Games and DICE have promised that there will be some shown off at E3 2015 in June:

“I really look forward to showing you all more from the game as we get closer to release, and for you guys who are asking me when you can see gameplay, I can tell you that we have great plans for E3,” said Niklas Fegraeus, Star Wars: Battlefront Design Director. “So tune in starting June 15, because at E3 this year, Star Wars Battlefront gameplay will make its debut and we’re all super excited to show it to you.”

So, until we find out more at E3 2015, we’re rounded up all the teaser tidbits of gameplay info that we can possibly find.

As you can see in the reveal trailer from April’s Star Wars Celebration above, there are a few new toys coming in Star Wars: Battlefront, including the new deployable shield, which is a Battlefront powerup.

The game will feature several modes, only a few of which have been revealed so far.

One of those is the Fighter Squadron mode, which you can also see in the video. It allows you to engage in huge Starfighter battles over huge canyons.

There are also Missions. These can take a variety of forms including tackling waves of AI armies or testing your pilot skills. The Missions can be played alone or co-operatively online and offline/split-screen.

Interestingly, when playing as a soldier you can freely choose between 1st and 3rd person views whenever you want – a la GTA 5 on PS4, Xbox One and PC.

Star Wars: Battlefront will also let you take part in sky battles, where you can tour the skies above the planets and dogfight with squadrons of starfighters.

You’ll be able to customize your own playstyle in the game too, with plenty of content to ulock, achieve and collect through the game.

EA Games has said it will provide further information on this at a later date.

In terms of characters, so far EA Games has confirmed you’ll be able to play as Darth Vader and Boba Fett. Details of the other playable characters will no doubt be drip fed to us towards launch.

“You can storm in as the Dark Lord himself,” said Niklas Fegraeus, Battlefront Design Director. “You can wield a lightsaber. You can Force choke the rebel scum, which is fun. Basically, you are the boss of the battle. This means you, as Vader, can lead your team to victory – if you play well.”

“We wanted it to feel authentic to this universe,” said Battlefront Executive Producer Patrick Bach. “You can get into these vehicles, from speeder bikes to X-wings, TIE fighters, AT-STs, AT-ATs. There’s a wide range of vehicles that we wanted to realize. The difficulty with a game is that they need to be balanced with the troops on the ground.” 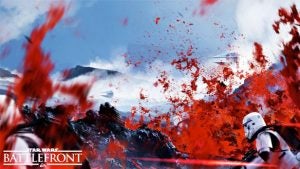 Star Wars: Battlefront Battle of Jakku DLC – How to get it

If you pre-order Star Wars: Battlefront, you can get the free Battle of Jakku when it is released.

How you’ll actually get your download code may vary, though, according to the retailer you pre-order your game from.

It’ll be one of these three ways though:

The DLC is available from all retailers accepting pre-orders for Star Wars: Battlefront.

Even if you don’t pre-order the game, you’ll still be able to take part in the Battle of Jakku, but you’ll have to wait until December 8 to get access to the free content. 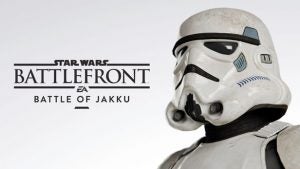 Players will be able to take control of either the Rebel Alliance or the Galactic Empire forces in the multiplayer mode.

Star Wars: Battlefront will feature four iconic planets and those locations will offer several maps. These planets are Endor, Hoth, Tatooine and Sullust.

“We’re going to take you places you’ve never been before,” revealed EA Games.

That’s all we know about the locations featured in Star Wars: Battlefront so far, but no doubt we’ll hear more about the various locales at a later date.

If you have seen or heard anything else about Star Wars: Battlefront let us know in the comments below. Or feel free to tell us anything you’d love to see in the game.