In the build-up to last Saturday’s long-awaited Samsung Galaxy S4 release, much attention was paid to the handset’s Smart Scroll capabilities and the notion of controlling your phone with your eyes.

Although this feature gives us a sense of omnipotent power over our puny smartphone servant, in terms of ‘killer features’, Smart Scroll is a little wide of the mark. It’s barely more than headline-baiting, marketing-appeasing filler. It doesn’t really track your eyes as you read, unless you nod your head up and down while reading like a simpleton.

In short, it’s chump fodder, playing on consumer weaknesses, while its useful – albeit less glamorous – siblings are hidden in the shadows.

Despite being far from the most interesting attribute of a device that has plenty to shout about, it is clear to see why Samsung adopted Smart Scroll as the poster feature of the S4. It grabs the attention and offers a glimpse into what, as kids, we thought the future would be like.

That said, however, and with Smart Scroll inevitably set to be disabled shortly after first use, Samsung has failed to mention many of the hidden, less publicised S4 features. We’re talking about features that will come to the fore in use and continue to impress long after Smart Scroll has been forgotten.

How about the Kinect-esque Air View that Samsung has pushed? We hear you ask. Or perhaps the personal postcard making Dual Shot camera mode you’ve heard so much about? Well, erm, no. These follow the Smart Scroll path of being gimmicky headline-grabbers of little practical use.

Avoid this marketing speak and scratch beneath the surface, however, and a raft of innovative features and highlights are hidden away, simply waiting to enhance the experience.

Although the Dual Shot capabilities might not be a camera addition to brag about with your mates in the pub, Eraser certainly is. It captures a five-frame burst and automatically offers to remove unwanted moving objects from the shot. It impressed us from the off and rid our snaps of unwanted photo bombers on more than one occasion. 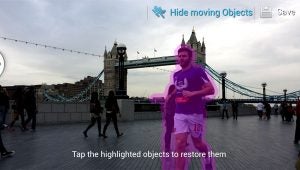 That woman who strolls aimlessly across your perfectly framed picture of your wife and kid – gone. That idiot mate of yours who thinks it’s funny to jump in and flip the bird whenever he spots a camera – gone. Eraser handles the lot and is dead simple to use too.

It is not alone on Samsung’s list of benchwarmer features striving to impress. S Translator is a genius introduction that could actually change lives and bring people closer together, while the much talked-about S Health is a copycat flop that fails to truly challenge more established fitness apps.

On the other side once more, Audio Adapt gives you a personalised hearing test before automatically altering the left and right channels and fine tuning the EQ for an improved audio experience. It has gone down a storm in the TrustedReviews office, where the handset’s barometer… well, put it this way, who needs a bloody barometer on their phone, right?

These features are just the tip of a mountainous iceberg stuffed with both delightful surprises and feature fluff. Let’s not forget too the phone’s 4G capabilities. Yes, the UK’s 4G networks might still be a bit thin on the ground, and yes making the jump to 4G is going to kick you in the coin purse – but the benefits are numerous and the feature seemingly relatively unimportant Samsung’s estimations. It will doubtless come into its own in months to come.

Is Smart Scroll the best Samsung Galaxy S4 feature, or even a key reason to choose this smartphone powerhouse over say the iPhone 5 or the HTC One? Well, no, not even close. Sadly, though this highlighting of headline-grabbing features when further gems lay hidden beneath is not exclusive to Samsung.

Following the HTC One advertising campaign, the thing most consumers will be able to tell you about that phone is that it has forward-facing speakers, oh and that bands have little foresight in which direction to point themselves.

And that’s before even mentioning the hype-mongering, use-starved feature that is Siri, famously introduced to the iPhone 4S to much fanfare and little continued use.

In a handset so full with features that you can’t see the wheat from the chaff, the considerable marketing push Samsung is heaping behind Smart Scroll and equally gimmicky attributes makes it is all too easy to lose sight of the fact that, beneath these short lived publicity stunts, the S4 is heaving with useful additions. You just have to know where to look.