Windows or Mac OS on Raspberry Pi?
Raspberry Pi is intended to be a Linux-based system – with official support for Fedora, Debian and ArchLinux in from the start. But will it run good ole Windows 7 or Mac OS? Not a chance, from what we can see.

The Raspberry Pi uses a 700Mhz ARM-based processor, which has a completely different architecture to the x86 chips demanded by Windows. Because of this, WINE will also not work. WINE, standing for Wine Is Not an Emulator, is a program that makes Windows programs run on systems other than Windows. But it still needs an x86 architecture to work. Bah humbug.

The same problem rules-out getting Mac OS running on the Pi – although we doubt the 700MHz CPU would cope with it anyway.

There are back doors to every technical problem, though, and we wouldn’t be surprised if some Raspberry Pi fans found a way to get some Windows apps working on the system.

Windows 7 is a no-no

Is there another way?
If Windows access is what you need, there are always VPN gateways to get hold of the Windows Desktop of another system. And if Android gets ported to the computer, the rather nifty OnLive Desktop is always an option, assuming it works on whatever breed of Android the Pi ends up getting.

How about Windows 8?
Windows 8 is quite different from Windows 7, in a way that’s good news for Raspberry Pis all over. Microsoft intends to support ARM-powered devices with a “WOA” (Windows on ARM) version of the OS. Will it work with Raspberry Pi? We can’t see why not. Ok, we can’t see why not other than that it’ll be designed for systems with way more than 256MB of RAM and a single-core 700MHz processor.

The future for Windows 8 WOA isn’t yet clear, though. It’s rumoured to be much more locked-down that the standard x86 version of the software, requiring a truly hack-tastic approach. Think you’ve got the cojones to take a project like this on? Do let us know.

World of Warcraft on a $35 computer?
We imagine many prospective Raspberry Pi owners have asked, or at least wondered, whether the computer will be able to hack World of Warcraft. The sad truth is that it probably won’t. For a number of reasons:

•    It runs on Windows and Mac OS, where Raspberry Pi runs versions of Linux.
•    Raspberry Pi can’t use WINE as a workaround, because WINE needs an x86 CPU, which the Pi doesn’t have.
•    Blizzard’s minimum specs for the game include a 1.3GHz Intel/ 1500 AMD processor and 512MB of RAM. The Raspberry Pi fails on both these fronts.
•    Even if these core specs weren’t a problem, World of Warcraft uses the OpenGL graphics standard, where the Raspberry Pi only supports OpenGL ES. It may sound similar, but the ES version is a simplified version.

A Raspberry Pi seems the perfect vehicle for emulator software such as MAME, the multiple arcade machine emulator. MAME has been around for 15 years and has been ported to a dazzling array of devices, even digital cameras. 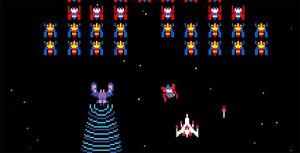 The good news is that work on a Raspberry Pi MAME box is already under way. Clever coder Nick Miller has written about how he has effectively emulated a Raspberry Pi on his computer to get working on his own MAME project before his Pi even arrives. It’s this sort of attitude that makes the hacking scene such a terrifyingly bustling place.

A Raspberry Pi arcade? It’s on the cards

What’s next?
To get the fully-polished MAME box experience flying, we’d like to see the Raspberry Pi boot straight into a neat emulator interface. You could even work the Pi into a controller, turning it into a console, without the console bit.

What will I need?
Within a few months, if not weeks, a usable version of MAME should be up and available for download on t’internet. But you’ll still need a ROM set, which is a collection of “images” (not pictures, data images) of the original arcade games. We can’t tell you exactly where to get them here, but they won’t be available alongside the MAME download.