Remote desktop apps for smartphones and tablets can give you access to your computer’s desktop wherever you are, but they’re frequently messy, awkward affairs that demand patience and a bit of technical knowledge. OnLive, known until now as a game streaming service, has put its own hat into the ring with a take on the remote desktop ideal that gets rid of all that clumsiness and makes it accessible for non tech-heads. It’ll start as an iPad app, before branching out to Android tablets, smartphones, PCs and Macs.

However, its operation is rather different from the traditional remote desktop approach. OnLive desktop doesn’t give you an image of your own computer, but rather a separate “virtual” computer run from OnLive’s server farms. The app interface is not yet available in the UK, but we got to see it in action across a range of platforms. Its free to use, but paid-for options unlock more features.

For the hardcore user, the stripped-back approach of OnLive Desktop may sound all-too restrictive at first. You start off with a fairly barebones install of Windows 7, but one that is equipped with Microsoft’s all-important Office apps. Using the free version of OnLive Desktop, any changes to this install will be wiped each time you use the service – a clean slate, every time.

All that OnLive retains is the 2GB of cloud storage that essentially acts as this virtual computer’s hard drive.  You can’t install programs to the system with the freebie version, but when many people use remote desktop apps just to access Microsoft Office functionality, this basic option will be enough for plenty of people.

Step up to one of the paid-for plans for OnLive Desktop (starting at $9.99 in the US) and its functionality opens-up dramatically. You can install additional apps – as long as they’ve been approved by the OnLive bods – unlock 50GB of internal storage, and boost the power and connection speed of your virtual PC. There’s quite a bit to get your head around within OnLive Desktop – it’s like having a PC within a PC (or tablet) and the processing power and speed of this inner layer of the Russian doll is more important than the specs of your own tablet or computer.

The baseline performance of OnLive Desktop gives you about the same processing power as a basic laptop, but we were shown a higher-end version of the setup running Autodesk Maya with perfect fluidity. OnLive said it was performing with the grunt of a £6k PC. But, no, you won’t get this kind of power for a tenner a month – it’d only potentially be available as a custom setup. Also eye-opening is the incredible bandwidth available in OnLive’s data pipe. Using a java-based web speed test, we saw results of 144Mbps download and 102Mbps upload – and apparently the true figure is much higher, the results limited by the test rather than OnLive’s bandwidth.

Just like the OnLive gaming service before it, OnLive desktop is technologically hugely impressive – amounting to a whole computer in the cloud. Thousands of ‘em, in fact. But if the user experience isn’t up to snuff, it’ll all be for naught.

We’ve talked a bit about what OnLive can do, but what is it actually like to use? From our hands-on test with the service, we came away hugely impressed. What Desktop succeeds at is making you feel as though you’re connecting directly with the virtual Windows 7 PC, rather than just looking through a window onto the thing.

This is primarily down to OnLive’s rather special proprietary video encoding and deployment techniques. There’s very little lag, the signal is thoroughly optimised for the screen used, whether it’s an Apple iPad or Samsung Galaxy Tab 10.1, and video quality is very good. In our review of the OnLive tablet gaming service, we noticed some signs of digital noise clustering around text, but we saw little of this in Desktop.

Video quality is great – note the lack of digital noise

Text was a little softer than it would appear if displayed natively, but fonts were comfortably readable. The iPad 2 in particular made Windows 7 look fantastic, filling the whole screen and looking eerily at-home on the 9.7in display. 1,280 x 800 pixel displays of Android Honeycomb tablets were a little less striking, partly because of the ever-present icon dock of the OS butting-in at the bottom. It still looks right on the screen though, the bit-rate of the transmitted video high enough to trick your brain into forgetting you’re just watching a transmitted stream.

Operation with a tablet isn’t quite as slick as the using the native OS – iOS or Android – but it just-about identical to using a Windows 7 tablet like the Asus Eee Slate EP121. Apart from the tablet you’re using being a lot slimmer and lighter than most Windows 7 tabs – they’re not the prettiest bunch.

Microsoft has put plenty of touch optimisation into Windows 7, including a half-decent virtual keyboard and great OCR (optical character recognition) that lets you write away on the screen with a capacitive stylus. Microsoft’s work on the touch UI isn’t enough to make it seem as though the OS was designed to be operated this way, but nevertheless stops using it from becoming a chore. 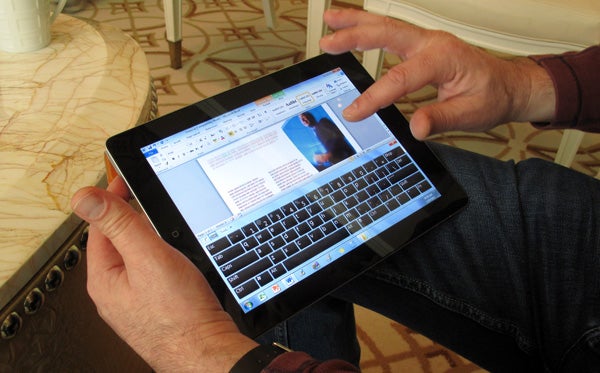 Accessories such as mice and keyboards can be used to alleviate these touch niggles, but work better with Android tablets than the iPad, which isn’t so friendly with third-party accessories. Just imagine what the Asus Eee Pad Transformer Prime could do with this app and a simple USB mouse – you can forget netbooks and dinky laptops entirely.

OnLive Desktop isn’t something that we imagine using as a wholesale replacement for the standard OS of a tablet, but its fresh approach to the problem of the remote desktop and getting access to Microsoft Office on-the-go is nothing short of brilliant. There is one important caveat, though. We tried out the service pre-launch, and with OnLive having laid-on the hardware to bring the best out of the system.

Once tens of thousands of iPad owners (and potentially many more too) are sucking the life out of the service’s servers, performance may well take a hit. But that’s why this isn’t a review. We’ll be taking a proper look at how OnLive Desktop performs for average users with bog-standard routers and home broadband connections once it launches in the UK.

OnLive says it’s holding back launch outside of the US in order to be able to manage server load – understandable given its the servers that do all the work. The iPad version is set to be the first released, followed by the Android tablet, PC, Mac – and even iPhone/Android smartphone – versions. We’ll be back with more on OnLive Desktop soon.

OnLive wowed us with its technologically jaw-dropping game streaming service last year, and now it has pulled off the double with OnLive Desktop. Its pure and simple approach to a remote desktop-like experience is the most accessible we’ve seen, and while the basic free version of the service may seem restrictive to remote working vets, the paid-for plans open up what you can do with it hugely.