We’re far from Project Shield haters. The mix of legit gaming controls, Android flexibility and the ability to stream high-end PC games through the GeForce Experience software sounds like a heavenly combo. But a slew of issues are likely to ensure it is squeezed into a niche inhabited by a select crowd of hardcore geeks. Here are those issues.

Nvidia’s Project Shield features cutting edge components for the most part. They include the Tegra 4 processor, a high-quality 720p 5-inch display, 2GB of RAM, 32GB storage and a high-capacity battery crammed into a carefully-designed, similarly high-quality casing.

None of these come cheap, Nvidia only being able to save significantly on the Tegra 4 processor – which Nvidia itself produces. Furthermore, Project Shield will have required more intense R&D than a “cookie cutter” tablet slab. The mechanism of the clamshell screen, the contours of the gamepad and the arrangement of the internals all require time, effort and expertise. And none of those come for free.

Nvidia can’t afford to lose money on Project Shield, either. Google and Amazon are able to sell their tablets without making a profit, because there’s money to be made elsewhere through their digital content portals. Profits from the Tegra Zone portal alone won’t come close to making up the difference. Project Shield won’t be a bargain basement gadget.

Unless Nvidia offers significant cash incentives for developers, neither Tegra 4 nor Project Shield are going to attract particularly 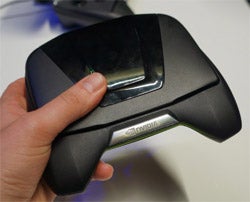 worthwhile exclusive games. The US launch of the handheld demonstrates this. Seemingly the console’s flagship launch title will be Hawken – an indie game from an indie developer.

Nvidia’s focus on courting indie developers is admirable, and it’s where many of gaming’s most interesting titles come from. But it’s not a road to commercial success.

We do not suggest that Project Shield won’t get any support from big mobile developers like EA, Gameloft and Epic Games, but rather that without exclusives it’s an exceedingly tough sell for buyers. And it doesn’t make sense for large developers to produce exclusives for Tegra 4 or Project Shield because the biggest pot of gold comes from iOS.  As charming as Nvidia may be, it is not going to convince savvy publishers to throw away tens or hundreds of thousands of dollars away.

Much of the target audience of the console will have either an iPhone or Android device, and would you really be willing fork out £400-500 for a handheld whose best games you already have access to?

Once of the most exciting parts of Project Shield is one that doesn’t rely on other developers at all, though. GeForce Experience is a piece of Nvidia software that will tweak the video output of your PC’s games – whether it’s Skyrim or Borderlands 2 – and send it over to the Project Shield screen instantly over Wi-Fi. You can also control the game remotely with Project Shield, making it feel as though you’re playing the game directly on the handheld.

GeForce Experience will let you play gorgeous PC games at full settings on the sofa with half an eye on the telly. No, it’s not what the game developers intended, but it’s what we’re most looking forward to trying out on Project Shield.

However, as technologically brilliant as GeForce Experience is, it’s painfully limited. The lowest-end spec that’ll work well with the software is a “proper” PC gaming rig, with a dedicated graphics card. In this world of console dominance, this severely restricts the audience that’ll be able to make the most of the impressive hardware. And expecting buyers to invest in a new gaming rig for the thing is even less realistic than assuming they’ll maintain interest without exclusive games.

The Nvidia Project Shield trades-in portability for ergonomics. It’s the size of an Xbox 360 console controller. It’s not slipping in any pockets, and will take up significant space in whatever handbag/manbag you choose to carry around your worldly wares in.

This is the most obvious, most simple issue that Project Shield faces, but it is also one of the most important. It’s one that’s becomes unavoidably apparent as soon as you get your first glance at the handheld. And it’s sure to put off swathes of more casual buyers.

As iPhones, and Android phones to an extent, are eating away at sales of traditional handhelds like the Nintendo 3DS and PS Vita, the Nvidia Project Shield decides to go the other way entirely. This is more Atari Lynx than 3DS, with a far less accessible mobile form than the PSP Go – whose separate-screen design was arguably partly to blame for the device’s dismal failure.

What we mean by failure…

It’s easy to label the Nvidia Project Shield a failure in the waiting because of this array of purse string-tightening factors, but having talked to Nvidia at the launch of the handheld, it seems grand commercial success may not be Nvidia’s aim.

Nvidia’s Jason Paul said that one of the key things was being able to keep the system open. He seemed excited about the prospect of keen young hackers getting hold of the thing and seeing what they can do.

These possibilities are what keep Project Shield feeling like one of the most exciting things we’ve seen in tech for a while. And what could see it go down as an all-time classic gadget, no matter how many units it sells. Fingers crossed, eh…