Graphics cards are big business for AMD and Nvidia, and both have released new product ranges this year. The Radeon R9 280X and GeForce GTX 770 are crucial for both companies: they’re within reach for many PC gamers, but they’re still powerful enough to function as their only graphics purchase for two or three years.

On paper there’s not much between AMD’s R9 280X and the GTX 770. The former card will set you back at least £239, and the latter costs a mere three pounds more. They’re not far apart on the spec sheet, either; the AMD card runs at 850MHz and churns out a maximum single precision performance figure of 3,315.2 GFLOPS, and the Nvidia hardware fights back with 3,213 GFLOPS.

To work out which is the best graphics card to buy we’ve run Battlefield 4, Bioshock Infinite and Crysis 3 at each game’s toughest setting and 1,920 x 1,080 resolution and looked the idle and peak temperatures and power use of the two cards to see which is the most effecient.

Our test rig for this test consisted of an Asus X79-Deluxe motherboard, Intel Core i7-4960X processor, 16GB of RAM and a 1TB hard disk.

Battlefield 4 is the latest instalment in EA’s shooter franchise and
it’s been optimised for AMD graphics, so we had high hopes for the
Radeon R9 280X.

The two cards traded blows when we upgraded the quality to Ultra – Battlefield 4’s toughest test. The R9 280X’s minimum framerate of 42fps was two frames slower than the Nvidia hardware, but the AMD card fought back with an average framerate of 58.76fps – around one frame faster than the GTX 770.

It’s almost a clean sweep for the red team, then, and it’s no surprise – AMD’s gaming programme means its engineers have visited Battlefield developer DICE and optimised the game to take advantage of Radeon hardware. While the Nvidia card was faster in one test, that was a minimum framerate benchmark, and neither card struggled to play Battlefield 4 at a smooth framerate.

That means it’s a clear victory for the Radeon HD 280X: if you want to play Battlefield, AMD hardware is the kit to buy. 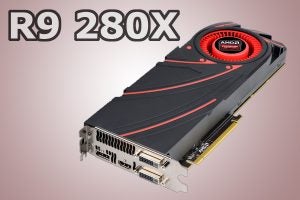 Battlefield 4 was a clean sweep for AMD, but Bioshock Infinite saw Nvidia fight back.

The result was less clear-cut when we ran the game at its less demanding Very High quality levels. While the GTX 770’s average framerate of 118.92fps trumped the 112.53fps scored by the AMD card, the R9 280X scored a minimum framerate of 29.99fps – a better score than the 21.82fps from the Nvidia card.

That minimum framerate figure means that there’s no clean sweep for Nvidia, but the GeForce GTX 770 convincingly takes the prize in this test – and the high average figures from the GTX 770 mean we’re not concerned about its slightly lower minimum result in one benchmark, especially when it took back its crown in a more demanding test.

While both cards will easily play this title across a single screen, the GTX 770 was between six and eleven frames ahead in both average-framerate benchmarks, and that makes it the winner here.

R9 280X vs GTX 770: which is the best graphics card for Bioshock Infinite? 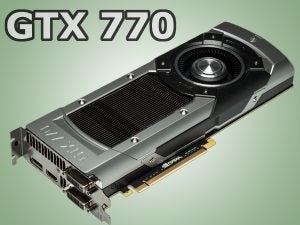 Crysis 3 comes from Crytek – the makers of the original Crysis, which
had a reputation for making PCs cry – so it’s fitting that this game is
the toughest out of the three we’ve measured in this battle.

Our
results showed a consistent difference between the two cards: while the
Radeon R9 280X usually had better minimum framerates, the GTX 770
always returned faster averages.

Both cards hit a minimum of 32fps when the game was run at its standard
Very High settings, but the GTX 770 took a significant lead in the
average benchmark: its 49.86fps score easily outpaced the 40.75fps of
the R9 280X.

We added 4x anti-aliasing to the game and the R9 280X’s 26fps
minimum was five frames ahead of the Nvidia card – but the GTX 770’s
38.23fps average was almost seven frames quicker than AMD.

That pattern was repeated when we bumped up to 8x anti-aliasing: the AMD card’s 21fps minimum framerate was four frames better than its rival, but the GTX 770 hit an average of 30.53fps – and the R9 280X could only manage 25.31fps. Crucially, that means the Nvidia card was the only one to return a playable framerate in Crysis 3.

The AMD card’s higher minimum framerates initially bode well for all-round performance in Crysis 3, but the GTX 770 was consistently quicker in average framerate tests – and it was the only card to remain playable when we ran this tough benchmark with 8x anti-aliasing. For that reason, this test goes to Nvidia.

The Nvidia card might have taken the crown in two out of the three
gaming tests, but it didn’t need extra heat or power in order to take a
convincing lead.

When the GTX 770 was slotted into our high-end test rig, the entire
machine pulled 145W from the mains – eight Watts fewer than the R9 280X
demanded. The gap only widened when we stress-testing the cards: the GTX
770’s peak figure of 432W was significantly lower than the 474W pull of
the R9 280X.

The gap was closer in temperature tests. The GTX 770’s idle temperature of 34°C was two frames lower than the R9 280X, and both cards hit peak temperatures of 76°C. There’s little between the two cards, then, and temperature also depends on which card you buy: some will be overclocked and run hotter, while others will have better coolers.

Both cards churned out a comparable amount of noise from their dual-fan coolers during our more demanding games tests, but neither was particularly loud – speakers will easily drown them out. And, as with temperature figures, the noise level of a card will be determined by which third-party model you buy.

Once again, though, Nvidia runs out the winner in this category – chiefly because of its more frugal power use.

We’ve tested reference cards in this battle, but the graphics card market includes a wide variety of cards with different features and price points.

AMD Radeon R9 280X cards range in price from £239 to a mighty £311, and cards at the top end of the scale always arrive overclocked, with the stock speed of 850MHz boosted to 1,150MHz in most cases – and with Boost speeds that tend to go between 50MHz and 70MHz higher still.

Other models aren’t as interested in overclocking – instead of trying to hit maximum performance, they have more efficient coolers that are quieter than standard models.

The situation is similar with Nvidia, although the GTX 770 is an older card, so there are more models to choose from. While you can pay £242 for a stock-speed model, this card could cost you a mighty £467. That’s an absurd amount, and it’s reserved for EVGA’s Hydro C card, which has 4GB of RAM and two in-built connections for water-cooling. The most expensive air-cooled GTX 770 costs £312, and it comes with a core that’s been overclocked from 1,085MHz to 1,137MHz.

GTX 770 cards are available in similar formats to their AMD rivals, with most arriving overclocked – GPUs typically high around 1,150MHz, with Turbo speeds hitting at around 1,200MHz.
There are plenty of cards to choose from – but also consider your own computer before shelling out on a new GPU. Both cards need single eight-pin and one six-pin power connectors, so make sure your PSU has the right plugs – and also ensure you’ve got at least a 500W unit inside your machine.

Also ensure that you have enough physical space inside your PC to accommodate these cards: our R9 280X and GTX 770 samples are 268mm and 272mm long respectively, and other cards could be larger. They’re also wide enough to occupy two slots on your motherboard.

AMD and Nvidia also try to tempt potential buyers with free games. AMD has its “Never Settle Forever” bundle, which generally grants gamers three free titles when they buy an R9 280X – although precisely which games are available is usually up to board partners. Nvidia, meanwhile, has its Pirates, Heroes and Spies bundle, which gives anyone who buys a GTX 770 free copies of Assassin’s Creed IV: Black Flag, Batman: Arkham Origins and Spinter Cell Blacklist.

It’s a close-run thing between these two cards at the checkout, but there’s a clear winner when it comes to actual performance. The GeForce GTX 770 takes a clear lead in Bioshock Infinite, and its average framerates in Crysis 3 are much higher – and in Battlefield 4, an AMD-branded game, it’s still easily able to handle top graphics levels. It does this using less power, too, which can never hurt.

Both of these cards are able to handle top-end games, but Nvidia’s GPU is ahead in more of our benchmarks. That’s why it’s our choice if you want to buy a graphics card for a little over £200.