The new Android smartphone kings of 2012 are trickling out onto the high street. The HTC One X is among the first. It has a quad-core processor, 8MP camera and a jaw-dropping 720p Super IPS screen. But how does it compare to the current king of Android, the Samsung Galaxy Nexus? Let’s break it down…

The HTC One X and Samsung Galaxy Nexus are top-end phones, but neither use the metal-coated bodies that feel strong, cool and – well – dead fancy between your fingers. Instead, they both have plastic finishes. The reason why is simple – although there’s a trend for big screens going on right now, there certainly isn’t much love for hefty handsets. Sticking with plastic rather than metal lets Samsung and HTC keep these phones well under 140g a piece. Both are lighter than the much-smaller iPhone 4S.

The HTC One X

HTC claims the One X is just 8.9mm thick, but that doesn’t seem to include the protruding camera lens housing. Both phones are impressively thin, though.

The approach to battery covers and general body make-up is quite different. The Galaxy Nexus has a very thin, interesting-looking dimpled battery cover that pulls off the back – again, it’s plastic – and the HTC One X takes a stroll down the iPhone path with a non-removable battery. 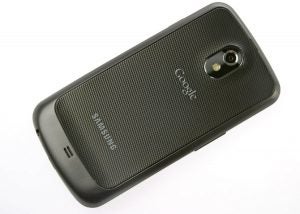 Neither phone quite aces it on the looks front, but the HTC One X has that simpler, more immaculate vibe. The bits we don’t like are the shiny sides. HTC has gone glossy for the edges, and in person it feels totally unnecessary. Ho hum. The iPhone 4S and Nokia Lumia 800 are both better-looking phones.

Both of these flagship phones have gigantic screens. They’ll be big enough to put off many people, so make sure you want a phone this big before upgrading from an iPhone – the difference ain’t minor.

If you can hack the size, though, they’re both rather brilliant. 4.65in and 4.7in a piece, and with 720p displays, they’re at the forefront of what mobile phones offer at present. They’re sharp, detailed and impressively bright. The screen technologies used are completely different, however.

The Samsung Galaxy Nexus has a Super AMOLED screen. These screens use light-emitting pixels rather than a traditional backlight, supplying unbeatable contrast and impressive – pretty perfect in fact – blacks. However, AMOLED displays tend to oversaturate colours, and we saw some of this effect at review.

The HTC One X uses a Super IPS screen. This type of display does use a backlight, but offers more accurate colour reproduction and superior brightness. To an extent, which screen type you’ll prefer will depend on personal preference and the lighting conditions you’ll use them in. AMOLED excels in dark environments, where the contrast-reducing effect of a traditional backlight becomes all the more apparent. For us – we’ll take the One X’s IPS screen, thanks very much.

As the first Ice Cream Sandwich phone, landing in late 2011, it’s no surprise that the Samsung Galaxy Nexus features a dual-core processor rather than the quad-core type now becoming common in top-end phones. There’s not a big difference in day-to-day operation, especially as there are no third-party software hangers-on in the phone’s software to slow the Nexus down. But you can bet some clever game developers will make use of quad-core GPU power this year. 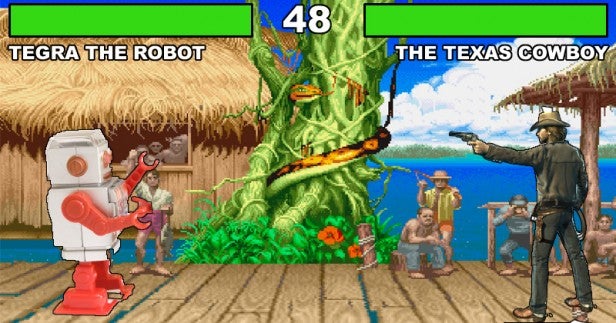 That’s something the HTC One X will be able to make use of. It has the Tegra 3 quad-core processor, a system-on-a-chip with a particularly good GPU. However, benchmarks have shown that it’ll be beaten soundly by others in 2012 – and doesn’t compare too well with the iPhone 4S’s A5 chip on graphics performance. The Samsung Galaxy Nexus can beat it in some benchmarks, too.

Both phones use 1GB of RAM, which should be enough to keep Android running smoothly even after you’ve loaded it up with a dozen talking cat apps and comedy soundboards.

It’s a depressing sign of the times – neither of these phones offers expandable memory. Walking in the footsteps left by Apple’s iPhones, top-end Androids nowadays often get rid of the microSD slot. In Apple’s case, this lets the iPhone range offer distinct pricing options between its different 16/32/64GB models, but it makes less sense with Androids, where one level of storage tends to dominate at retail.

Annoyingly, budget Androids still universally offer expandable memory – because they don’t come with a decent amount of storage to start off with. There are bonuses to cutting out microSD, as it helps the system stay neater, with no chance of you “removing” apps by flicking out the SD card. But we’d rather have one to play with.

Still, the storage benefits of Android remain. You can drag and drop files to the internal memory, rather than needing to sync with a piece of software you might otherwise have no need for.

Read on for more