We’re starting to enter the age when phone cameras can replace a decent compact snapper. We’ve been saying so for years, but it’s only now that top phones are starting to incorporate tech that makes it true. Three of the top phone cameras in existence are those of the HTC One, the iPhone 5 and the Nokia Lumia 920. But which is the best? We’ve road tested the phones to find out.

On the most basic spec level, the iPhone 5 and Nokia Lumia 920 sound like the most advanced cameras of the trio, with eight-megapixel sensors, against the HTC One’s lowly-sounding four-megapixel sensor. However, the truth is much less simple.

The HTC One has larger sensor pixels than either the Nokia or iPhone, designed to improve low light performance. HTC calls it UltraPixel technology, although that’s really just a marketing term. Tech-wise the iPhone 5 camera is the least interesting, and the most basic.

The ace up the Nokia Lumia 920’s sleeve is optical image stabilisation. There’s a teeny motor in the lens that keeps it stable, even when you’re not. The idea is that this enables the camera to use longer exposures, which should result in better photos.

But does it work?

These shots of the London skyline show in an instant what these cameras photo tones are like. The iPhone 5 is punchy and bold, the HTC One is a little glum-looking in comparison and the Nokia Lumia 920 has a nice warm skew that gives shots a sort of rose-tinted view of the world. 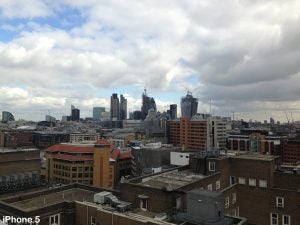 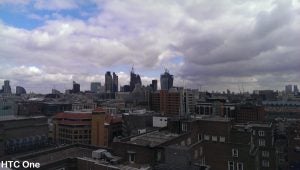 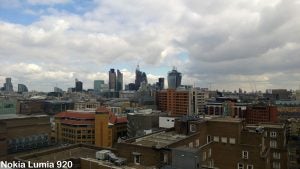 Get closer into the detail, and the shortcomings of the HTC One and the Nokia Lumia 920 become apparent. The 4-megapixel sensor of the HTC phone simply can’t relay anywhere near as much data as the iPhone 5’s 8-megapixel sensor. Check out the crane detailing for conclusive evidence. 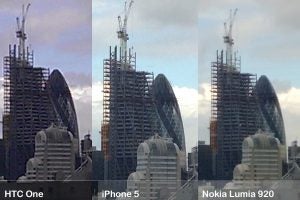 There’s more information in the Nokia Lumia 920 picture – near-iPhone 5 levels – however, there’s a slight soft fuzziness to the image. This may be down to the phone using a slightly longer exposure, in spite of decent lighting conditions. Contrast is also significantly lower, although the iPhone appears to deliberately increase contrast beyond natural levels to increase punchiness.

All these phones are fairly effective little macro machines, able to focus on reasonably close-up objects. The tone of the iPhone 5’s greens is quite far removed from those of the other phones, over-egging the tones a little to provide a punchier look. 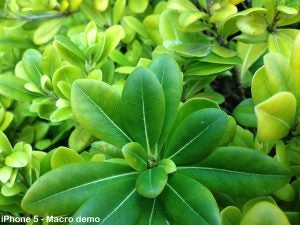 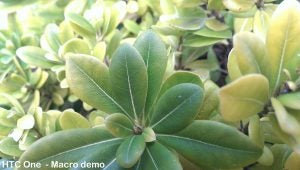 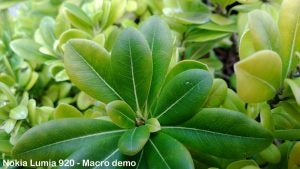 Again, the HTC One provides the least detail, with the leaf looking flat, and its veins not as clearly and cleanly rendered as they are by the iPhone and Lumia 920. And again, there’s an almost soft-focus effect to the Lumia shot, making the iPhone 5 photo again the most sharpest – although fine details are most naturally relayed by the Nokia phone. 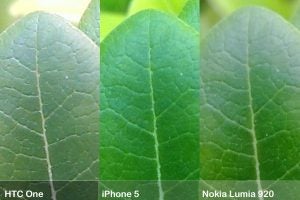 The Nokia Lumia 920 does not have an integrated HDR mode – extra modes like this have to be downloaded as “Lenses” applied within the camera app. There isn’t an official Nokia or Microsoft one, which seems a missed opportunity.

Both the iPhone 5 and HTC One offers HDR modes, though. 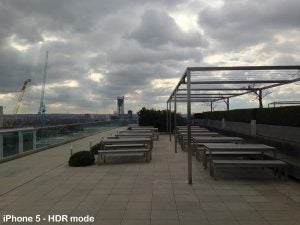 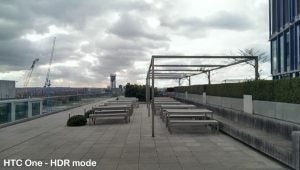 Although the HTC shot is arguably the more pleasant-looking picture, the iPhone 5’s is more successful technically. The clouds are overexposed in the HTC One photo, suggesting the merged exposures of the HDR composite haven’t been handled all that well – blowing out of clouds is one of the main things an HDR mode should prevent.

The iPhone 5 shot is evenly exposed, and the HDR mode has revealed masses of cloud detail that would otherwise be blown out. Well done, Apple.

Shallow depth of field is a cornerstone of just about all “arty” photography. It’s all about getting your subject in focus, but leaving the background a pleasantly smudged blur.

With a spot of expert touch focusing, all three phones can reproduce this effect to a degree. The background blur effect is known as bokeh. 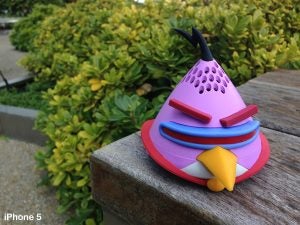 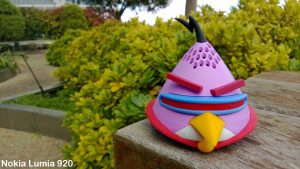 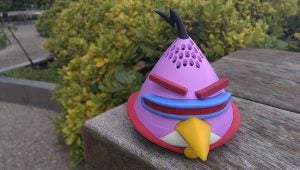 The bokeh of the Nokia Lumia 920 is the smoothest and “creamiest”, boasting the most impressive depth of field effects of the bunch. It’s less prounced in the HTC One and iPhone 5, which also demontrate more background grain and noise.

The degree to which the Angry Bird speaker’s antenna is artificially sharpened in the HTC One is pretty clear too – it’s likely that HTC uses fairly aggressive image sharpening to mitigate the paucity of sensor pixels. Again, the Nokia Lumia 920 looks downright soft, so it’s not quite the flawless victory for Nokia. However, the benefits of shallow depth of field are pretty noticeable in this composition. 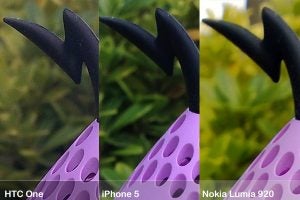 So far, the iPhone 5 has put in a good performance, but the others – despite many strong points – have been a little problematic. Low light performance gives the HTC One and Nokia Lumia 920 a chance to fight back.

The level of detail captured in this dark scene by those two phones is much greater than what the iPhone achieves. Its shadow areas are more-or-less devoid of any detailing. 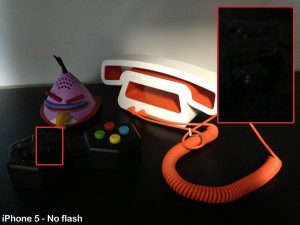 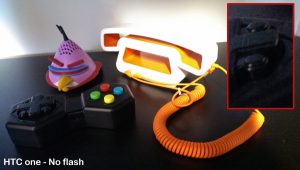 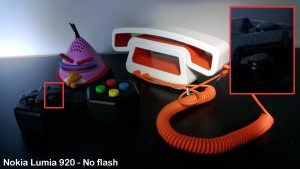 However, the exposure issues we encountered in the HTC One’s HDR mode have returned. The white phone looks blown-out as the phone’s camera tries to compensate for the lack of solid lighting.

The Nokia Lumia 920 is the winner here, with less graininess than the HTC One.

After pretty poor low light performance, the iPhone 5 flash once again disappoints. It leaves the scene looking cold and unnatural, and its spread is not even. It’s the sort of picture that puts us off turning the flash on unless it’s absolutely necessary. 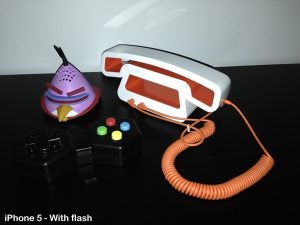 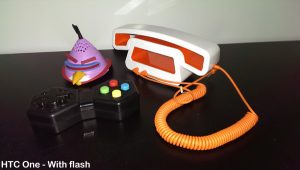 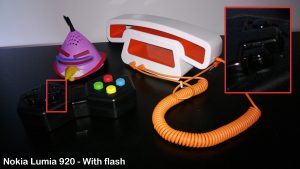 By contrast, the Nokia Lumia 920 and HTC One flashes are pretty darn good. The HTC One is the winner to our eyes, with a good level of power, a neutral tone and consistent spread. The only issue is that pesky overexposure, which has wiped out some of the fine detailing of the phone. The line between the handset and base has vanished, when it’s visible in the Nokia Lumia 920 shot.

There are ways in which the HTC One and Nokia Lumia 920 cameras are clearly superior to the iPhone 5. Low light performance and colour tone are often superior in those phones. However, the iPhone 5 is probably the most consistent performer of the lot, avoiding the soft images of the Nokia Lumia 920 and the tendency to over-expose of the HTC One.