After Microsoft’s surprised us all with its HoloLens headset last month, Rob Temple takes a closer look at the birth of holographic technology and where it could be heading next.

Leading the charge on this new altered reality is Microsoft, who earlier this year, you may have heard, unveiled the HoloLens – a wireless helmet that overlays holographic imagery in the user’s view field.

Despite looking a little bit Oculus Rift, which creates a completely virtual environment, it’s actually more like what Google Glass might have gone on to become, allowing wearers to interact with virtual stuff that’s been added to the actual world around them. The holographic illusions can cover the floor, rest on other objects, hover in space and be seen from various angles, while users can issue commands regarding what should be done with the objects via gesture or voice.

So it’s not purely virtual (Oculus) and not quite augmented reality (which doesn’t let you manipulate objects), but is one of the most advanced examples of what’s being termed, by some, as mixed reality. 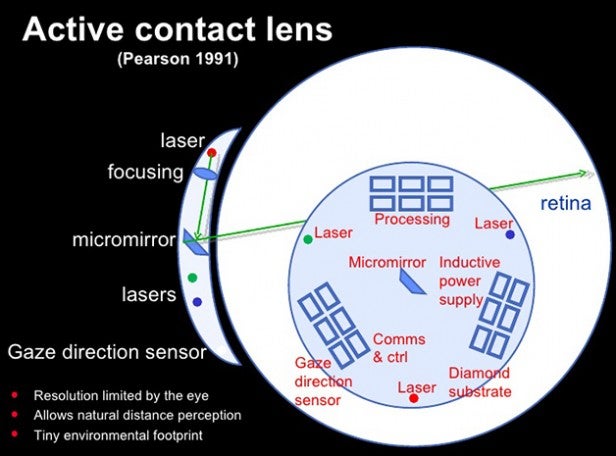 The idea is far from new, however. One man for whom the HoloLens “brings back memories” is futurologist, author and tech pioneer Dr Ian Pearson. Not only did he invent text messaging in 1991, but also in the same year, it could be argued, paved the way for technology such as Kinect, Google Glass and the HoloLens with his own VR invention, the active contact lens.

This was a wearable lens with potential uses such as monitor displacement, 3D TV, virtual reality interfaces, vision enhancement and customised reality. In his 1991 paper, Dr Pearson writes: “People could be replaced by customised characters, streets could be paved with gold, and trees could be added to landscapes”. Twenty-four years later, with the HoloLens, it seems this is now a reality.

“I’ve been very enthusiastic about the potential for augmented reality since I invented the active contact lens in 1991”, Dr Pearson told us. “Since AR converges the real and virtual worlds, it could have a long term impact far greater than the web, which converged networking and computing. Microsoft’s HoloLens concept could be the intermediate visor step we have all expected, and it will be wonderful when it finally arrives if the resolution permits anything like what they show on their promotional videos.”

There are many potential uses for this technology, both for consumer and enterprise upon release in 2015. Forrester analyst James L. McQuivey thinks it could be huge, telling us, “If successful, holographic computing will expand the way that people interact with machines, just as the mouse-based interface did in the 1990s and touch interfaces did after the introduction of the iPhone in 2007”. He also notes the importance of not just the headset but of Windows 10, which has a core holographic computing engine built into it, meaning that developer’s don’t have to build holographic engines from scratch and that “millions of Windows devices around the world will be hologram-ready in very short order”.

McQuivey tested the headset in a variety of Microsoft applications. He Skyped an engineer while wearing it to learn how to change an electric light switch, he turned the room he was in into Minecraft blocks and visited the surface of Mars (more of this later). He believes Microsoft will shift huge numbers if it builds compelling experiences in three areas: Hardcore gaming, family-friendly gaming and social media. 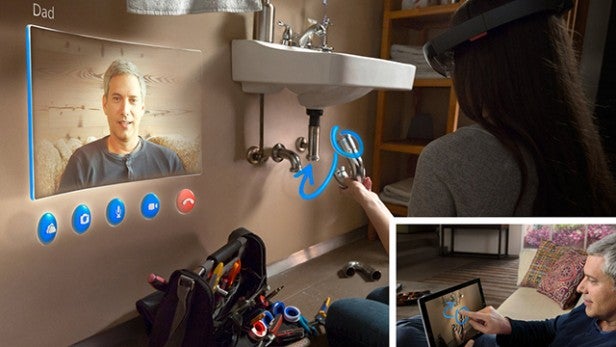 Taking Halo as an example, he said, “The first time that teens see a mixed-reality hole blasted in their own bedroom walls revealing invading aliens rushing in behind them, they’ll be hooked”. Add in the collaboration with other gamers that social media allows, and you can imagine the monstrous potential of this type of tech. (It’s also at this point worth noting that it needn’t be this specific headset that sells, it’s the software we should be excited about. As McQuivey states, even if the HoloLens headset fails, mixed reality is here to stay).

However, although excited by the potential, some analysts suggest that we won’t be seeing streets full of people in these headsets from the word go, with IHS gaming analyst Pier Harding-Rolls telling the BBC, “It is clear that this new immersive form of augmented reality could make a powerful and compelling gaming platform as well as an efficient collaborative tool for commercial deployments. However, we do not believe that a consumer offer for HoloLens is likely to be launched in the very near term and, considering the proprietary technology involved, we believe the price point when released will make this a niche consumer proposition in the early cycle.”

There are many other uses for HoloLens, despite gaming being perhaps the most obvious. Forrester notes that in the US alone, trillions of dollars a year is spent at retail, with 9% of that spent online. That’s $294 billion a year. If just 10% of that moved to holographic shopping, where no screen is required and you could be in a virtual dressing room, it will be worth tens of billions. Other uses highlighted by Forrester include travel – imagine seeing what it’s like to sit in a certain plane or visit a certain resort; automotive – look under the hood of a virtual car or see what a certain motor would look like n your garage; and DIY – imagine virtually seeing how that sofa would fit in your living room instead of finding out for real that it doesn’t. 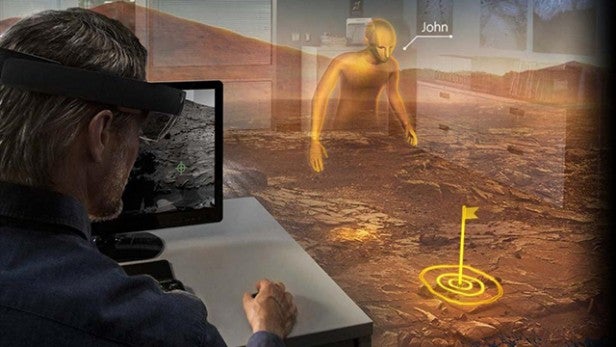 Mentioning travel, it’s not just beach holidays in our bedrooms on which the HoloLens will take us, these types of headset will also aid scientists in exploring the galaxy. We’ve all heard about the plans to send humans on a one-way mission to Mars, but now we can bring Mars to us. Combing the HoloLens with the Mars Curiosity rover, NASA and Microsoft have developed a software called OnSight, a new technology that enables scientists to work virtually on the red planet.

Using the headsets, the Curiosity team can stroll around the rocky surface or crouch down to examine rocky outcrops from different angles, interaction with Mars in a more natural way. “Previously, our Mars explorers have been stuck on one side of a computer screen”, said Jeff Norris, JPL’s OnSight project manager. “This tool gives them the ability to explore the rover’s surroundings much as an Earth geologist would do field work here on our planet”. Someone tell Richard Branson we don’t need those passenger space crafts after all… that’s a couple of hundred thousand quid saved.

Throw your gadgets in the bin

So, that’s where HoloLens has come from and where it could lead, but as a final point, and one which nobody seems yet to have made, is that the HoloLens could perhaps make many other gadgets redundant, thereby saving you rather a lot of money. As Dr Pearson notes, “Why buy a smart watch, tablet or a PC display when you can magic one up in front of your eyes?” Why indeed. So long, stuff, it’s been nice knowing you.