We’ve been playing around in Los Santos for quite a while now, discovering all of its secrets, recreational activities and the like. Basically, just having a great time and marvelling at Rockstar Games’s creativity.

Just for you, we’ve put together a relatively spoiler-free Los Santos Tour Guide, so you can get the best out of your GTA 5 experience. Feel free to add your own must-sees in the comments section below. 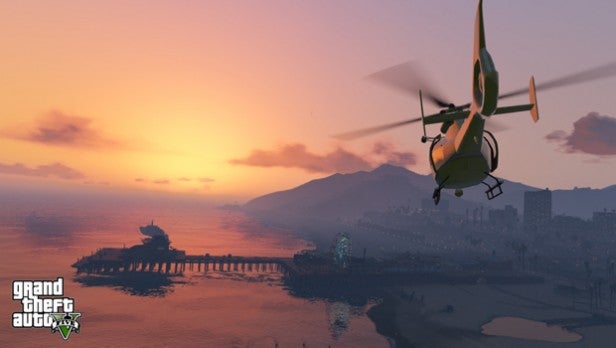 Get your pilot’s license
There are tonnes of planes to steal in GTA 5, from helicopters to jet fighters and biplanes. Trying to get your grubby mitts on them can be quite tricky though, as some of them can only be found in the military base, where the guards are quick to shoot you on sight.

Watch a movie
You can head down to one of the new cinemas in GTA 5 to catch one of the many movies showing in Los Santos. They’re all pretty long, but if you’re in the mood, we recommend you watch a few. Our particular favourite is one called The Loneliest Robot in Great Britain.

Sample the local delicacies
Rockstar has introduced a new mini-game as part of the GTA 5 strip club experience. Feel free to touch while the security guard isn’t looking and boost that “Like” bar for the amusingly-named strippers, but you had better stop when he’s looking or you’ll be kicked to the curb.

Drink yourself (or a friend) under the table
As with GTA 4 and other GTA titles, you can get pretty wasted in GTA 5. It feels a lot more realistic being drunk in GTA 5 though, so we’d recommend frequenting one of Los Santos’s many drinking holes for the true experience. You might want to go as Michael and take your cheating spouse Amanda with you. The drunken banter they throw back and forth is pretty comical.

Watch your pennies
Stock market, banks and real estate are all ways to make the most of the money you earn, although we managed to lose a fair bit investing in the wrong companies, so consider yourself warned. 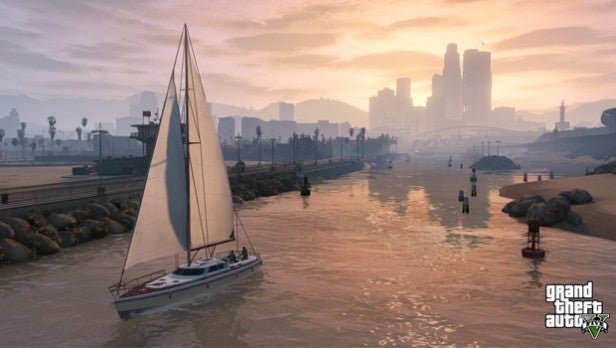 Get that blimp
The blimp is a pre-order exclusive, taunting those who weren’t obsessed enough to get the game on release date. We’re trying to work out a way to get to it. Don’t worry, we will.

Practice your backhand
Tennis is one of the most addictive mini-games we’ve encountered in GTA 5. Not only are the mechanics great, every character has their own range of reactions when they win or lose a shot.

Discover beings from another galaxy and hunt down a mythical creature
High in the mountain peaks there are rumours of a hairy, mythical creature known as Bigfoot. We’ve searched, but he doesn’t seem keen on being found. There’s also talk of extra-terrestrials in Los Santos, and there is a sunken spaceship at the north of the map that’s only accessible via submarine.

Get some antlers for your wall
If hunting Bigfoot and ET isn’t your bag, you can take out regular animals like bears and deer in the wild instead. 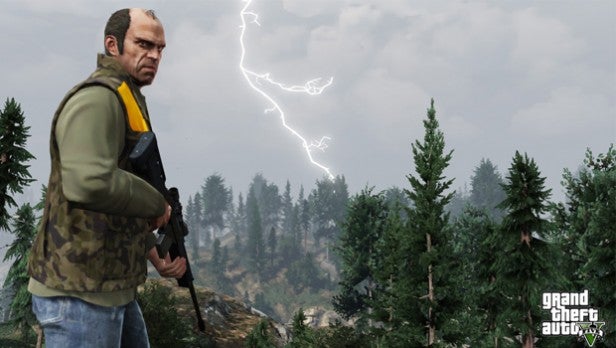 Practice your aim
You’re encouraged to level up the skills of all three of the GTA 5 protagonists, and one way to do this is to head down to the shooting range. There are three challenges to complete for every weapon category and for each individual weapon. If you get as addicted as we did, you’ll have all the gold medals within the hour.

Jet ski around Los Santos
There are lots of jet skis scattered along the beaches of Los Santos and they are a great way to explore. You can head through the tunnels along the shoreline to access the inner waterways of the city too.

Partake in a triathlon
Build your character’s stamina by doing a few triathlons, and you can even race the fitness mad Mary Ann, who will give Michael a run for his money.

Hit a Birdie
For the discerning GTA gamers out there, you can partake in a round of golf at the Los Santos Golf Club, which is only for exclusive members. The game mechanics are pretty good, and there’s lots of fun to be had and seen on the course, just don’t miss your tee time.

Do the Punching Starfish
You can also strike a pose when doing yoga in GTA 5, either in the comfort of your own back garden or take a private session with the slightly sexual Fabien LaRouche. 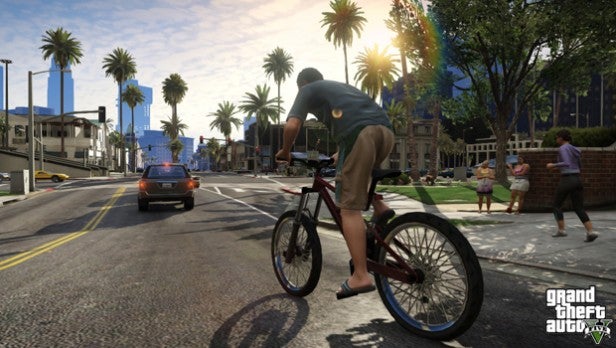 Pimp your ride
Using the official iFruit app or the paint shops in the main game you can customise the hundreds of the vehicles available to buy or steal in GTA 5.

Swim with the fishes
GTA 5 is the first in the series to allow you to venture underwater. You can either freestyle it and go see what the fish are up to, or grab a scuba diving kit and not have to worry about coming up for breath.

Walk the dog
As with the vehicle customisation, you can train and look after Franklin’s dog Chop using the GTA 5 iFruit app. It’s still a bit buggy, but it will earn you in-game rewards if you persevere. Within the main game, you can take Chop for a walk, play fetch and go for drives together. 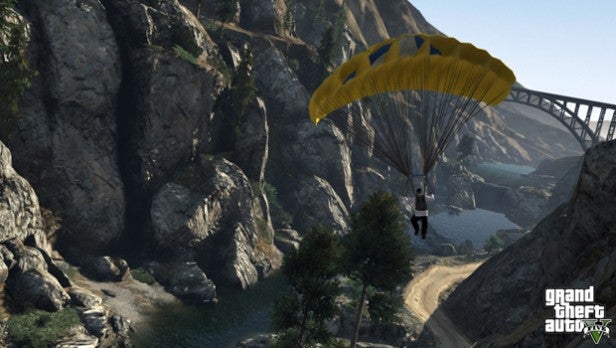 Look for Easter Eggs
There are literally hundreds of GTA 5 Easter Eggs to be found. Even Rockstar says you probably won’t find them all, but from collecting UFO parts and working out that secret message on Mount Chiliad to finding Niko Bellic, we’re ready to give it a go.

Ride the rollercoaster
Pier Del Perro pier is the home of the Los Santos “Ferris Whale” and rollercoaster, both of which you can ride for a price. You’ll want to tick if off your list, but you might not want to do it twice. 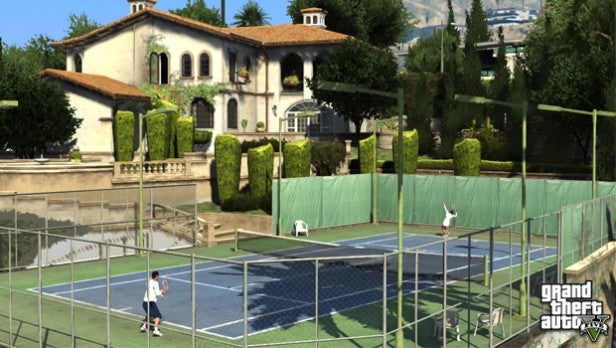 Soak up the scenery
Rockstar Games has increased AI so that the NPCs are much more reactive to your actions in GTA 5. Citizen journalism is rife too, with pedestrians videoing your bad behaviour on their smartphones.

Plus Los Santos is actually stunning so it’s worth just driving around to see what you can find.

Visit Heffner’s pad
Rockstar has included its very own version of the Playboy Mansion in GTA 5 and you can find it in the very northwest of Los Santos. The mansion itself is unremarkable from the front, but head round into the back garden at night and there’s quite the party going on. Most of the girls have forgotten their bikinis!

See the stars
Hop on the tour bus at the Vinewood Walk of Fame, which comes complete with its own set of stars, and you’ll see quite the sights. There’s an actor working on his zombie impression, several film references and Halo-esque Master Chiefs to boot. 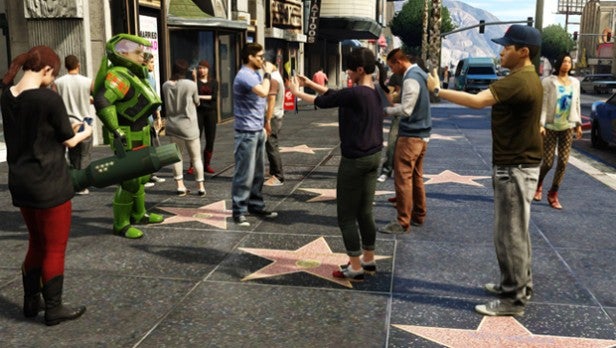 Fly under bridges
GTA 5 has loads of Aerial challenges you need to get that coveted 100 per cent completion status. There are 50 Under the Bridge and 15 Knife Flights to complete, which can only be achieved by flying under special bridges and through tight spots between skyscrapers.

Build a spaceship
There are more challenges to complete in GTA 5 too, including collecting spaceship parts and letter scraps that are scattered all across Los Santos and Blaine County. There are a staggering 50 of each to find though, so get hunting.