The Google Nexus 7 revolutionised what we expected from a budget Android tablet. It was cheap, but didn’t have any of the cut corners we’ve seen in budget tablets to date.

But now a new contender is on the scene. The Amazon Kindle Fire HD improves upon the Google Nexus 7 in some ways, but is it really the better tablet? We take a closer look.

It’s hard to argue with the prices of the Google Nexus 7 and Kindle Fire HD. Both make the iPad look thoroughly expensive, selling for half the price. With an extra adrenaline shot of price aggression, though, the Kindle Fire HD wins.

Offering double the memory for the same money, as well as a higher-capacity top-end model, Google needs to seriously think about chipping a few pounds off the cost of the Google Nexus 7.

As a pair of sub-£200 tablets, it’s a bit optimistic to expect fancy materials to be used in the manufacture of the Google Nexus 7 and Kindle Fire HD. However, both are well-made little devices. 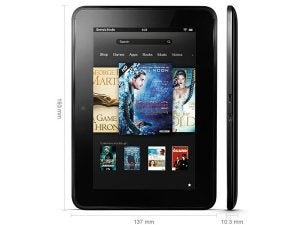 They’re of similar size and thickness, and use treated plastic rears that feel a lot better than standard glossy plastic. The Google Nexus 7’s rear is pitted and feels, remarkably, a bit like leather. Amazon’s Kindle Fire HD uses more a traditional rubberised finish, for extra grip. It also features a strip of non-rubberised plastic on the rear, where the Kindle logo sits, and also where the speakers live. 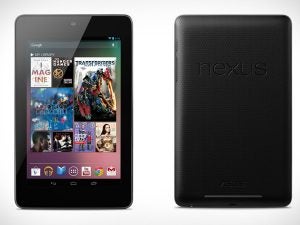 From the front, each is an innocuous slab of black, with none of the physical buttons seen in other budget tablets from no-name manufacturers. They’re level-pegging in the design race, although the bezel approaches are quite different. 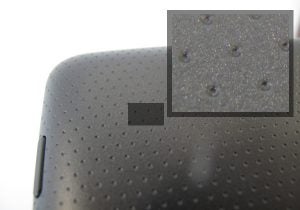 IPS screens have become the standard for tablets. They offer superb viewing angles, which is a massive boost when viewing movies, where you’ll need to tilt the screen to get comfy. 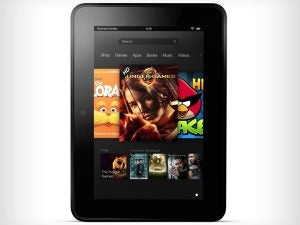 This screen type features in the Google Nexus 7 and Kindle Fire HD, as does a 1,280 x 800 resolution. This brings pixel density of 215dpi, which will supply very sharp text and images. The iPad 3 needn’t worry (it is 264dpi), but unless you’re going to crack out the magnifying glass, the difference in sharpness won’t be terribly apparent.

Amazon claims it packs anti-glare technology into the Kindle Fire HD, with the use of a polarising filter. Google doesn’t make similar claims for the Nexus 7 – it is a pretty reflective little tab – and this should give the Amazon tablet slightly better performance in bright sunlight

The little green heart of Android beats at the core of the Google and Amazon tablets, but in-use they’re actually very different. Google’s Nexus 7 runs a stock version of Android 4.1 Jelly Bean, which is the very latest version of the operating system.

Amazon has packed a heavily customised version of Android 4.0 Ice Cream Sandwich into the Kindle Fire HD. The custom UI is geared towards giving you easy access to the digital content offered by Amazon – movies, books, music and apps too. 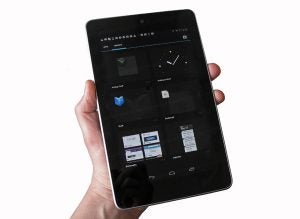 The Amazon UI is a little more accessible for novice users, but we have an inkling the techies among you will prefer the all-out tinker-ability of Android 4.1 Jelly Bean. It’s a lot slicker and smoother than any previous version of Android, but still has the same basic geek-friendly approach. You are given home screens you can fiddle with as you like, and many basic elements can easily be replaced with third-party apps.

In-use the Google Nexus 7 will feel slicker than the Kindle Fire HD. It’s not primarily because the Google tab is more powerful (although it is), but because Android Jelly Bean has been tweaked to make full use of the processor power available. There’s likely to be a little bit of judder to the Kindle fire HD’s moves.

Just as the Kindle Fire HD strips out the visual style of Android and replaces it with its own look, the tablet replaces the official Google Play app store with Amazon Appstore, which launched recently in the UK.

The Amazon Appstore is effectively a lot like any other third-party Android apps shop – and there are a lot of them about. However, the difference here is that the Amazon name will automatically win it a lot of developer support. That means more games and more apps.

But more games and more apps than Google Play? Absolutely not. The Amazon Appstore will remain a secondary app store, unless the Kindle Fire range squeezes the Android tablet market to the point where it’s choking to death.

The neat thing about the Android Appstore, though, is that it offers Amazon-style navigation through the Amazon website. Flicking through subgenres of apps is much quicker and easier than it is on Google Play, and you have much greater control over how you search through its wares. It looks simple, but it simply works.

We shouldn’t forget about the additional media available on the Kindle Fire HD – there are more movies and TV shows available here than within Google’s multimedia portals. For sheer breadth of apps, though, Google Play is hard to beat.