Canon has introduced the EOS 70D. It’s an enthusiast DSLR with an APS-C sensor – just like its predecessor the EOS 60D.

It looks just like the old model too, with a penny-saving plastic body, and arrives at around £1,000 body only. However, it sees Canon finally get with the times by adding a few sorely missed techy features to the classic 60D formula.

For more information, check out this first look at the Canon EOS 70D from our sister publication What Digital Camera.

But what is it for? The dual-pixel array is not for pure imaging quality, but for faster focusing. Using two photodiodes per sensor pixel rather than just one lets the EOS 70D use more advanced phase detection for speedier locking-on when focusing – reading the output from each photodiode separately. When actually taking the shot, both these photodiodes can then be used together to take in light.

We’ll have to wait to get our hands on the EOS 70D to see exactly what image quality effects – for good or bad – the dual-pixel sensor will have.

Canon EOS 70D vs 60D – More advanced image DIGIC 5-plus processor
Canon’s DIGIC image processor gets reasonably regular updates. It’s no surprise that the DIGIC 4 sensor of the 60D looks a little aged next to the DIGIC 5 sensor of the EOS 70D.

The simplest improvement this brings is a significant speed increase – most noticeable in the burst mode. Where the EOS 60D had a burst mode speed of 5.3 images a second, this is boosted up to 7fps in the 70D. 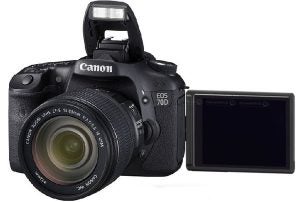 Canon EOS 70D vs 60D – Integrated Wi-Fi (and NFC)
An important modernisation that is finally starting to slump onto ‘serious’ cameras is integrated Wi-Fi. The primary use for Wi-Fi is transferring images over your home internet connection, but it also enables control of the camera using a phone app.

With this you can control settings like ISO/exposure and, most importantly, take photos. There’s no longer a need for timed exposures.

To get any sort of Wi-Fi connectivity with an EOS 60D, you have to buy something like an Eye-Fi memory card, which has its own wireless connectivity for transferring of images.

Also missing from the 60D, and present in the 70D, is NFC. This stands for Near-Field Communication, and lets the camera ‘talk to’ and transfer images between nearby NFC-compatible devices. Wi-Fi is the biggie here, though.

Canon EOS 70D vs 60D – Display is now touchscreen
Although the dimensions of the 70D’s rear screen are the same as in the previous generation, the display is now touchscreen. It uses a capacitive touch layer that lets you focus and take shots without touching the top controls, as well as changing settings with a prod rather than button presses on the rear plate’s controls.

There may not be an improvement, but the EOS 60D had a very high-end display in the first place. Many high-end cameras with 3-inch screens ‘only’ have 920,000-dot screens – making the 60D and 70D displays that bit sharper.

APS-C size sensor
We never expected the Canon EOS 70D to use a full-frame sensor, but it’s worth noting that both the 60D and 70D use APS-C size sensors, meaning their core image quality will be in the same class when used with the same lens.

Using a higher-resolution sensor with the same sensor size also means that the sensor pixels of the 70D are actually a little smaller than those of the 60D. Its pixels are roughly 16.4 microns a piece, where the 60D’s are 18.5 microns.

Aside from the impressive-sounding dual-pixel sensor, whose benefits will only become obvious through testing, the Canon EOS 70D is a sensible and necessary upgrade of the EOS 60D. By incorporating a touchscreen, Wi-Fi, GPS and NFC, the 70D will feel like a much more modern camera. Picture quality won’t change a huge deal – but then the quality of its images was never an issue with the 60D.

Indeed, now is probably a good time to take a look at the 60D as it’s widely available for around £500 now – as you can see from the eBay auctions below.