Eye-Fi cards have been around for some time now. The SD card-sized devices not only store your camera’s photos on local memory but include a Wi-Fi chip, allowing you to upload your photos to an online store without having to remove the card from your camera. They’re immensely useful if working on location as you can also have the files appear on your laptop as soon as they’re uploaded.


Now the company has been established a while it has branched out its operation to offer a number of variations on the Eye-Fi theme with Connect X2, Geo X2, Explore X2 and Pro X2. The devices themselves are all physically identical, looking as they do like standard SD cards, but differ in the services associated with them. 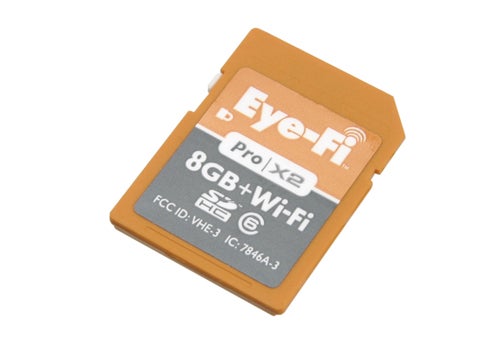 Connect X2 is the entry level model offering a 4GB capacity, wireless uploads to your computer and online photo store; Geo X2 adds geotagging (using a Wi-Fi based tagging service); Explore X2 adds hotspot access (just add your 3rd party hotspot log in details and away you go) and bumps the capacity to 8GB; and Pro X2 finishes the range off with the addition of Ad Hoc networking (no need for a third party network) and RAW uploading. All cards can be upgraded to add these features further down the line. So that’s the current range, and today we’re looking at the top-end Pro X2 so let’s see how it fares. 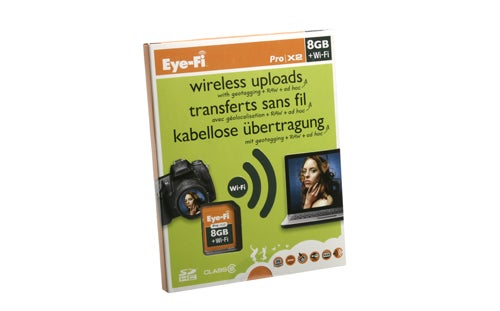 The card itself is utterly indistinguishable from a standard SD card except for its branding and eye-catching orange livery. It comes in a card and plastic box that keeps the device well protected and thankfully isn’t a finger-cutting blister pack. Included alongside the basic but sufficiently informative instruction manual is a rather chunky USB-to-SD card reader. We’d have liked to see an integrated USB connector like on the ingenious OCZ Trifecta but we can appreciate that with having to fit a Wi-FI adapter into the card as well, there simply may not have been space. 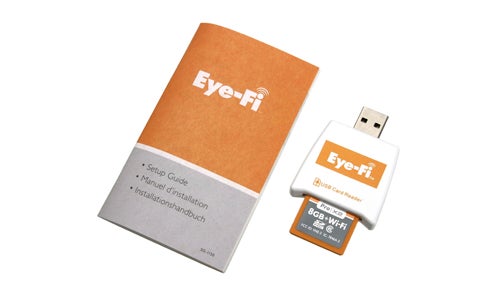 Setting up the Eye-Fi Pro X2 takes a bit of time, making you install (and no doubt update) the software that comes on the card, register an account with Eye-Fi and set up your initial wireless network, but given ten minutes or so and you should be ready to go. Pop the card in your camera and you can start snapping away, seeing the results appear on your computer as you go. Log into your Eye-Fi account on its website and you’ll also find the results ready and waiting for you.


We tested this most basic functionality of the Pro X2 using a Canon EOS 550D DSLR, which like a number of modern cameras natively supports Eye-Fi cards, allowing you to enable or disable Eye-Fi uploads, check what Wi-Fi you’re connected to, and see that photos are being uploaded via a flashing Wi-Fi symbol. If your camera doesn’t support Eye-Fi cards, fret not, as the card will simply work of its own accord, automatically doing its thing in the background while appearing to the camera like a standard SD card.

We started off by taking photos at the camera’s default 18 megapixel mode, recording our images as high quality jpgs. This resulted in files of around 5MB in size, which we quickly learned took some time to upload – 24 seconds to be exact. While an acceptable speed for more casual use, this is a bit tardy for those needing immediate results – such as when live blogging or writing quick news. As such we tested again with image quality set to a more lowly – but eminently useful – 7 megapixels and at medium jpg compression. This resulted in files of around 1.5MB in size and took a mere 12 seconds to transfer. To really test the card’s mettle, though, we set it to RAW JPG (you’ll also need to enable RAW transfers in the Eye-Fi software settings) whereupon it took 100 seconds to transfer. All told, there are faster wireless solutions if you’re willing to buy the expensive proprietary adapters available for some DSLRs but for general use the Pro X2 impresses. 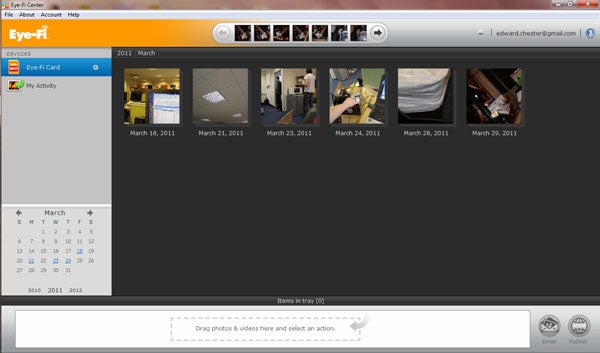 One point to note, however, is that you are of course reliant upon the quality of the wireless network to which you are connected, and in public spaces speed can be pretty ropey. Moreover, for every new network you encounter, you will have to pop the card into your computer, open the Eye-Fi software and manually add the new network. In both instances, though, you can rely on the Ad Hoc connection instead. 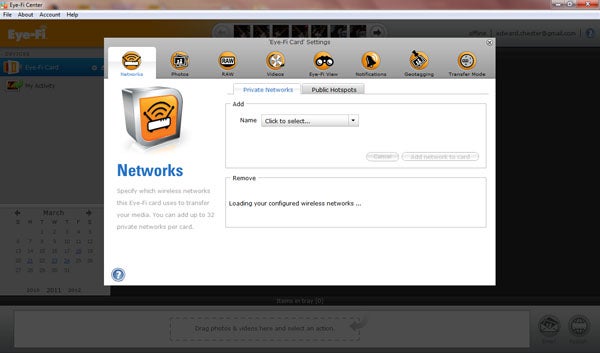 Ad hoc allows you to use your computer to create its own private network to connect to with the card, so you can snap away to your heart’s content – even in the middle of nowhere – safe in the knowledge your shots will find their way to your computer. The downside to Ad Hoc is that you’ll be disconnected from any other wireless networks while you have it enabled – obviously for our aforementioned news writing/live blogging scenario this isn’t ideal. Connecting to a wired network as well will solve this. 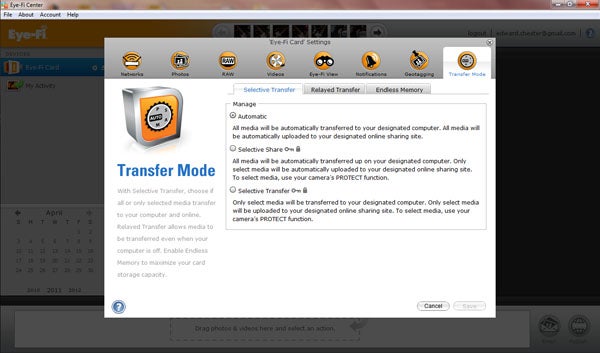 While snapping away, you can have your photos tagged with a geo location so you can then map them onto Google Maps or such like at a later date. However, this tagging is done via the IP address assigned to your computer when connected to a network, which if you’re in the back of beyond using an Ad Hoc network won’t work. Nonetheless, it’s a neat extra. 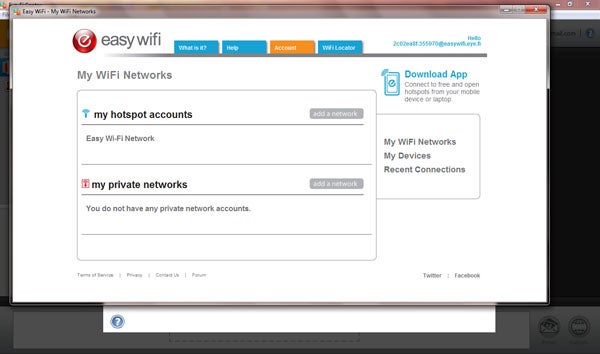 The final piece of the Pro puzzle is its public hotspot access. This is powered by Easy WiFi and allows you to input your login details to either Easy WiFi’s own public WiFi service or it links up with thousands of other providers. It, along with a number of the steps involved in getting the Eye-Fi setup, is a bit of a faff to get going but once done so is a breeze to use. Explorer and Pro cards have 1-year’s free HotSpot access or you can upgrade a lower range card for $24.99.


Universal features available to all Eye-Fi cards include the ability to upload photos to the Eye-Fi online store for safe keeping as well as share them with sites such as Facebook, Flickr, MobileMe, and Picasa. You can also have the card continually delete photos from its internal storage once they’ve been safely uploaded so you never need cleanout your card again. 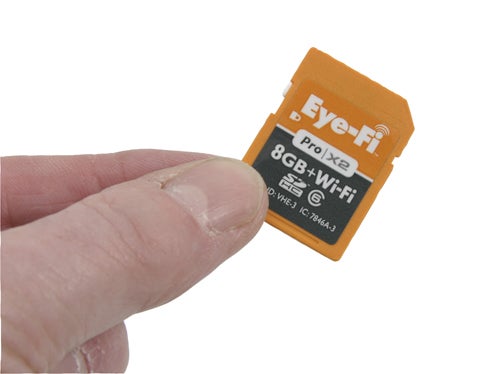 When it comes to price, the Eye-Fi range doesn’t come cheap with the entry level model costing around £45 and the Pro being around £100. This compares with about £5 and £10 for standard SD cards of the same capacity. However, for the range of features on offer – and bearing in mind you should never need buy another card – they all seem fairly priced.


There’s no doubt the Eye-Fi range has a niche appeal: being able to wirelessly transfer photos from your camera to your computer is something only so many people need. Moreover, the extra features brought about by the Pro X2 version of the range are even more specialist – most amateurs won’t need instant RAW transfers for instance. However, if you’re an enthusiastic photographer who works a lot while out and about and needs instant access to your photos, the Eye-Fi Pro X2 is an awesome purchase. It doesn’t come cheap but compared to dedicated proprietary wireless solutions, it’s a bargain, and of course it will work in any camera.