It happens every year, to us at least. You forget it’s April 1 and you see a news story that makes your jaw drop.

You’re about to tell all your friends about the amazing news when you suddenly realise what day it is. April Fool’s day is one of the most reviled dates in the calendar by some, and not without reason in this digital age.

But there have been a few decent tech-related gags this year. Here are our favourites.

Google Chrome’s Emoji translator is one of the cutest techy April Fools this year. And it’s one we’d love to actually be real.

You type in a term and Google Chrome is able to turn it into a cutesy cartoon emoticon. But sadly it’s not real.

Not happy with the Tesco Hudl and the utterly dreadful Argos myTablet? Ocado has something a bit special for you. It’s the sLablet (see what they did there?).

It’s a tablet that “plugs the vacant 42-inch gap in the market”, according to Ocado. No-one is going to fall for this April Fool’s gag, but Ocado has made a genuinely quite funny video to showcase its “tool for tools”. Give it a watch above.

London’s public squares are full of pigeons, and at present they’re mostly known for their pebble-dashed decoration of most of many of the city’s less spikey buildings. However, Samsung’s 2014 April Fool’s has come up with another use for London’s maligned ‘flying rodents’.

Samsung’s Tim Verhoeven (sadly not a real person) explains, “This is about thinking laterally – using one nuisance, pigeons, to fix another, a lack of Wi-Fi.” Samsung wants to strap tiny little micro routers onto the backs of the pigeons to give us all better Wi-Fi signal in places like Trafalgar square.

The best, and slightly evil, bit is that Samsung says the router battery will be able to recharge through the pigeon’s hollow bones when they sit on the telegraph wires. Not sure what the RSPB would say about that…

Sphero usually makes little motorised balls that you can control with your phone. But with the SelfieBot it goes a hop, skip and rotor blade further.

It’s a flying robot that follows you around, taking selfie style photos whenever you need them. It’s “Always watching…for life’s most precious moments.”

It’s the ‘Every Breath You Take’ of gadgets – some people will think it’s lovely, but it’s actually deeply, deeply creepy. And just imagine what it’d do it you woke up suddenly and got your barnet caught in its rotor blade. Ouch.

You might assume that the next generation of fitness trackers would measure more of your vital signs, and maybe make suggestions about exercises you could do. But you’d be wrong.

The future is clearly the Virgin Active Smarty Pants. They’re pants that count how many bum clenches you perform.

It features an old-school LED that sits just above your backside and counts away. Have a look. 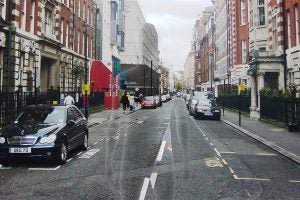 This one’s based on technology you could almost believe in, until it starts talking about “light bending” technology. It’s an invisibility suit, covered with dozens of cameras and “thousands of micro-LEDs”. And as it’s made of spandex it’ll be totally comfy too.

And all this for only a grand. You could offset that with a spot of theft in the first week alone. For a few more details, check out the page over at Morphsuits, which made the April Fool.

Let us know your favourite/most hated April Fool’s gag in the comments.