Ask punters about PCs and most will talk about bulky desktop cases, but that stereotype has never looked more out of date. Machines like the Asus VivoMini and MSI Wind Box challenge the norm, with capable components and capacious hard disks inside tiny designs.

We’ve pitted the two small-form-factor champions against each other to discover which is worth your cash. MSI’s machine is cheaper but it’s saddled with lesser hardware, while the good-looking Asus has a stronger processor but a higher price.

The Asus looks more mature than its cheaper rival. It’s squat and square, for a low-profile look, and it’s made from black plastic with a bulging lid decorated with a subtle circular pattern – the same sort of finish found on many Asus notebooks. It’s simple and sophisticated.

MSI’s machine is different in almost every way. It’s designed to stand upright, it’s largely finished in white and its angled design elements are in stark contrast to the smooth lines of the Asus machine. The glossy plastic of the sides feels a little cheap too, while the meshed sections are a fairly crude looking way to aid cooling. We’re hesitant to call it downright ugly but it’s definitely more of an acquired taste.

In terms of dimensions, the fact one stands upright and another sits flat makes direct comparison somewhat moot but, for the record, the Asus is a little smaller. It’s 131mm across and just 42mm tall, while MSI’s machine is 35mm wide but 192mm tall. In other words, the choice is clear if either height or width are key restrictions for where you want to place your PC.

A big plus is that it’s easy to get inside both systems. Two screws on the MSI’s narrow rear allow one side panel to slide free, providing easy access to components: the 2.5in hard disk is only held in place by a couple of screws, and the single memory slot is laid bare. The processor isn’t simple to access beneath its small heatsink, but it’s of little consequence as the Intel chip is soldered to the motherboard. 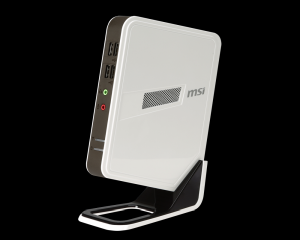 The Asus has a smart opening mechanism: four screws are removed, and one is placed into another hole in the base to function as a handle to lift away the bottom panel.

The VivoMini is designed similarly to Intel’s NUC machines, with a square motherboard that’s got components on both sides. The accessible side has better connectivity than the MSI: two memory slots, an mSATA socket for SSD storage, and access to the wireless chip.

The underside can be reached by removing a further pair of screws, but there’s little of interest – the CPU and heatsink lie here, but not much else.

The Asus eschews ports on its front edge, presumably because they’d ruin the VivoMini’s sleek aesthetic. Instead, two USB 3.0 ports and an SD card reader sit on the side. The rear is well-equipped, with two USB 3 ports, HDMI and DisplayPort outputs and a single headphone jack. There’s also Gigabit Ethernet, dual-band 802.11ac WiFi and Bluetooth 4.0.

MSI’s machine has four USB 2.0 ports on its front panel and a card reader on its roof, but its rear isn’t as well-stocked. It’s still got two USB 3.0 connectors, but display outputs are limited to HDMI and D-SUB. It’s not as impressive on the networking side, either – it’s got Gigabit Ethernet, but it’s limited to single-band 802.11n wireless, with no Bluetooth. 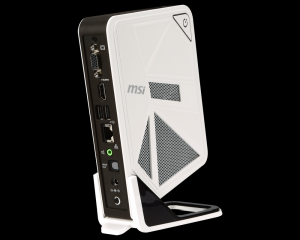 The two systems differ in the software department. The MSI is cheaper but it’s sold with a full install of Windows 8.1 64-bit – whereas the Asus doesn’t have any OS. That’s fine if you’re happy with Linux, but it’s an extra cost if you want to use Windows.