After the Kindle Paperwhite, comes the Kindle Voyage. Amazon’s latest flagship e-reader was unveiled alongside a whole bundle of Kindle Fire tablets and was definitely the pick of the announcements.

Launching in the UK on November 4th, the Wi-Fi Voyage is priced at £169 while the model with built-in free 3G is unsurprisingly more expensive at £229.99.

It’s the priciest e-reader Amazon has launched but here’s why we think Kindle fans could be persuaded to go for the Voyage when it lands.

Thought text on your Kindle Paperwhite looked as good as fine magazine print? Take a look at the Kindle Voyage’s screen and you’ll be forced to think again. Amazon has boosted the resolution dramatically, to the point where it crams 300ppi (pixels per inch) into its 6-inch screen. By way of a comparison, both the Paperwhite and the Nook GlowLight manage 212ppi.

It even beats the previous standard bearer for text sharpness, the 265ppi Kobo Aura HD.

The Kindle Voyage’s screen isn’t just sharper – it’s also much brighter than before. And we don’t just mean that its front-lit display is physically brighter, though it is indeed 39 percent brighter then before, and with superior contrast to boot.

It’s also brighter in the sense that it’s cleverer. There’s a new ambient light sensor that adjusts the brightness according to immediate light conditions. This actually goes beyond quickly dimming in dark conditions, like your smartphone or tablet does. Rather, on such occasions the Voyage’s screen will gradually dim to the appropriate level, matching the rate at which your eyes adjust to darkness. 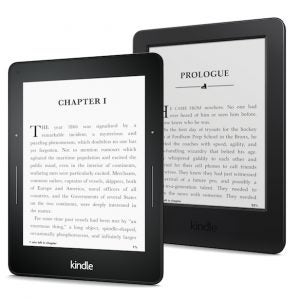 This is the first Amazon Kindle to come with a glass screen instead of a plastic one. It reflects the Voyage’s position as a distinctly premium e-reader, but there’s a practical reason too.

The screen now sits flush with the device’s bezels, which has obvious aesthetic benefits, but it also means that it’s more exposed to general wear and tear. By switching out soft plastic for toughened glass, the Voyage’s display should survive the additional scuffs and scrapes that will inevitably come its way.

Of course, one of the biggest downsides with glass screens is their tendency to glint and reflect light – a particular problem when much reading is done outside in the garden or on a beach.

Amazon has countered this by micro-etching the screen so as to diffuse any light that hits it. Clever.

More than any tablet device, e-readers need to be
comfortable to hold for long periods. The Amazon Kindle Voyage excels
in this regard, too.

At just 7.6mm thick, it’s 1.5mm thinner
than the Kindle Paperwhite, and 3mm thinner than the Nook GlowLight.
As we’ve just mentioned, Amazon has helped achieve this by making the glass display sit flush
with the bezels.

At 181g, the Voyage is also a fair bit lighter than the 206g Paperwhite, though it’s 6g heavier than the Nook GlowLight. 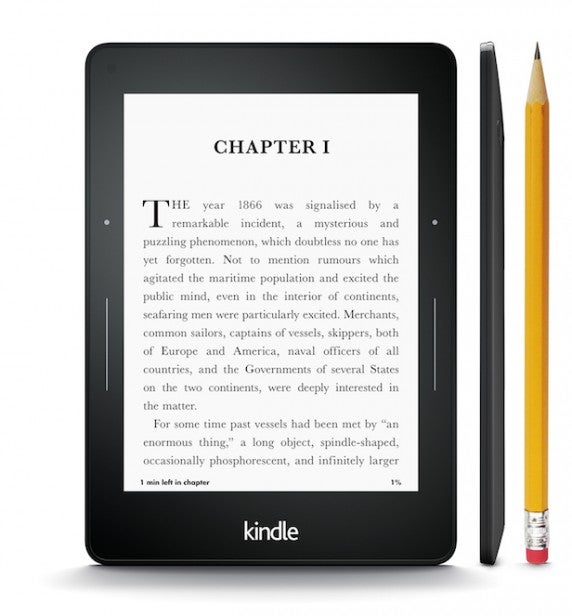 Amazon has made a bold move and done away with its functional, tactile, yet somewhat inelegant and bulky page-flipping buttons.

In their place, the Voyage has a clever PagePress system that hides pressure-sensitive sensors under the side bezels. A slightly squeeze, and the page will turn accordingly, accompanied by a subtle dose of haptic feedback (a little vibration).

The Amazon Kindle Paperwhite only had 2GB of storage, which is good for about 1,000 books. The Kindle Voyage matches the Nook GlowLight with double that.

And carting more books around with us is what we’re here for, right?

Do you like the sound of the Kindle Voyage? Let us know your thoughts in the comments below