Now that China has finally built its crazy traffic-straddling bus, we take a look at some of the other weird and wacky transport inventions that could have a life-changing effect on how we get around.

You may not believe it but this bus, called the TEB-1, is being trialled today in Qinhuangdao, China. It hasn’t quite made it onto the streets just yet though – this is just a test-run on a 300-metre track.

Manufacturers believe it could eventually handle tight turns, travel up to 60kmh (40mph), and carry more than 1,200 passengers at once. Obviously this week’s tests don’t prove much, but if it does finally make it into full service, bus lanes could soon be a thing of the past.

Here are seven others transport wonders that could be zipping us to our destinations in years to come.

The Aero X hover-bike is available for purchase for an estimated price of $85,000, and could be in your garage as early as 2017. Designed to carry two people at a height of three metres above the ground, riders will reach speeds of up to 72kmh (42mph). The company says it could be adapted for unlimited outdoor uses including agriculture, land surveying, border patrol and plain old having fun in the desert. Either way, Donald Trump probably has a fleet ready to go if he becomes president.

General Motors’ Electronic Networked-Vehicle (EN-V) was originally showcased in 2010 at CES, but still hasn’t gone on general sale just yet. A new four wheeled version is also being trialled. However, with a top speed of 30kmh (18mph) and a range of 40km (25 miles), there are many who could cycle faster and farther, saving on the electricity to charge them.

Telsa chief Elon Musk is forever making the headlines with his new quirky ideas, but this one looks like it may become reality. It combines magnetic levitation and a low pressure tube to propel vehicles at proposed speeds of up to 1,100kmh (700mph). Planning documents have already shown a route from LA to San Francisco earmarked, but with costs amounting to tens of billions of dollars, the question of funding has cast doubt over the project. Still, a test track is currently being built and, if it does go ahead, it could make the 354-mile journey between the two cities in 30 minutes. Now that’s quick.

Related: Hyperloop could open to the public as soon as 2018

A few of these have been made since we saw James Bond use one in the 1964 film Thunderball. Yves Rossy, known as the Jetman, is widely seen as the pioneer in this field and flew alongside an Airbus 380 in Dubai last year. Madness. Should you not like a thrill-seeking adventure, you can buy Martin Jetpacks to do things like get around the golf course – something Bubba Watson has already had a go on.

Related: Jetpacks are real and they’ve been caught in 4K flying around Dubai

Another gadget no doubt taking inspiration from another James Bond film, but this time it’s Man With The Golden Gun. Fortunately, this is probably going to happen. The FAA has given clearance for the hybrid car-plane that could travel up to 320kmh (200mph), with an unmanned prototype announced that will to take to the skies by 2018. The company’s website is also giving you a chance to reserve one. But don’t worry, no one will be hovering around crashing into buildings as the flight will be operated by a computer. Blade Runner, here we come.

6) Bike lanes in the sky

Okay, so no hi-tech here but the designs that have been proposed for London and Toronto look pretty cool. We at TrustedReviews love our bikes, so this could feature in our commute to work in years to come. Car-free and elevated above the traffic below, the scheme in Toronto would have a tunnel which provided tired riders with a healthy tail wind. The bad news is that so far, neither scheme has seen funding to make it happen. 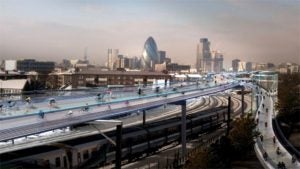 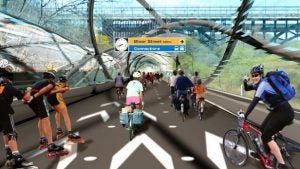 Lexus says there’s no such thing as impossible and they’ve certainly proved it with this hover board. It uses maglev technology to suspend it over the ground, but the obvious downside is that the ground also has to have magnets in it. So while it may look good, we won’t be fulfilling our Back To The Future 2 dreams just yet. The smoke you see in the video above is the liquid nitrogen cooling the superconductors but it doesn’t half add to the super-cool effect – literally.

Watch: Can we trust Tesla Autopilot?

What do you think to these transport tech innovations? Let us know in the comments below.