Apple has announced its new MacBook Pro 2018 models, but for me they stop short of being a must-buy based on specs alone. Trying out the full hardware for myself could change my mind, but here are the things Apple could have done to get me on board on day one.

Apple is the company I find the most frustrating in the world. It’s so rigid with so many of its decisions and so determined to do its own thing rather than embrace common standards, that buying an Apple product is a very specific decision.

Yet at the core of each Apple product is often something that’s so compelling, so amazingly well executed, that I continue to pick them despite my smaller frustrations. I continue to use Apple phones because their App Store often sees software released their first and, occasionally, exclusively.

Of course, it also helps that iPhones hold their value like pretty much no other handsets out there, which means they’re always worth selling even at the end of their two year tour of duty.

When it comes to MacBooks it’s something even more simple. It’s the trackpad. I’ve never used a Windows machine that has a trackpad that’s even half as intuitive as what Apple has been equipping its laptops with for years.

It’s not Windows fault, and nor is it the fault of any of their hardware partners, it’s just that Apple’s rock solid integration between software and hardware lets it do things that no one else can.

As much as I love the company MacBook I use for work though, I’m still not sold on actually buying one for myself. Here are five opportunities Apple missed to sell me on the MacBook Pro 2018.

1. Give me the dongles I need

I actually like the move overall to be honest. These universal connectors can handle everything fine by themselves, but most people need a little bit of a nudge before they actually start buying accessories that utilise them.

But while most people still have accessories that stubbornly still used USB type-A or Mini DisplayPort they’re going to need dongles to use them, and it annoys me that Apple doesn’t include these in the box.

People might not have liked Apple’s decision to drop the headphone jack from the iPhone 7, but at least Apple thought to include an adapter in the box. It should seriously consider doing the same for the MacBook Pro. 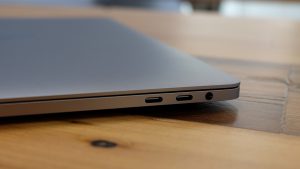 2. Give me back the scissor-switch keyboard

Apple has apparently made this year’s MacBook Pro keyboard a whole bunch quieter, and frankly I couldn’t care less. Laptop keyboards are pretty quiet to begin with, and it’s rare that I need complete silence while I work.

I’m more concerned about a keyboard that feels nice to type on then one that’s super quiet or slimline. This shouldn’t surprise any of my colleagues who have to put up with my clacking away on a mechanical keyboard for eight hours a day.

I mean just look at this beauty…

Obviously Apple would be crazy to put a full mechanical keyboard in a laptop, but the old MacBook’s scissor switches always felt like a reasonable compromise to me. In contrast the more modern butterfly switches feel a little cheap to me, and not something I want to type on for hours at a time.

Please Apple, there has to be a better way.

3. Don’t force me to buy an older model if I don’t want the Touch Bar

The Touch Bar isn’t a terrible addition to the MacBook. I know people who work in music production that find it helpful for quickly changing their settings, and I could feasibly see how a digital artist could set up some pretty useful shortcuts on it.

Oh, and bringing Touch ID to the MacBook could end up being a fantastic addition if it ever works with WebAuthn to seamlessly log you into websites.

But it’s a feature that inevitably adds cost to the MacBook, and it’s a feature that I’d happily do without if it means saving myself some money. Unfortunately though if you want a 2018 MacBook Pro then you’re going to have to pay for the Touch Bar.

Maybe one day the Touch Bar will have functionality that makes it an essential purchase for me, but for the time being I can do without it and would like to have the option to do so. 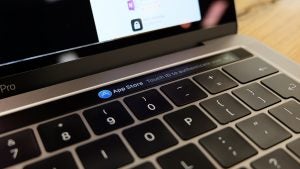 External graphics cards (or eGPUs for short) are potentially a game changer for laptops. By putting a full desktop GPU in an external enclosure you not only get the power of a full-fat card (rather than a slimmed down mobile variant), but you also get the ability to upgrade your graphics card when it can no longer run the latest games.

But so far they’ve not quite lived up to their potential. Part of the fault lies at the feet of the Thunderbolt 3 standard, which isn’t quite fast enough to prevent it from being a performance bottleneck, but there are other issues which seem more avoidable.

First up are the restrictions Apple places on which graphics cards you can actually put in an external enclosure. At the moment, only AMD cards are actually supported on MacOS, which is a shame when Nvidia’s cards are consistently outperforming them these days.

But even beyond your choice of cards, there are still plenty more annoying restrictions about eGPU performance on Mac. You’ll have to use an external monitor for one thing, and getting it to support Windows in BootCamp is a bit of a hassle even if some users have gotten it working. 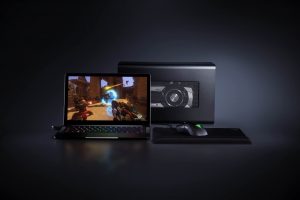 If you’re thinking that these all sound like pretty minor complaints then you’d probably be right.

But on a whim I just specced out a MacBook Pro with the features I’d need for a work/gaming laptop (16GB RAM, 1TB SSD, quad-core i5) and the total price came in at over £2500. That’s a crazy amount of money for a laptop, even if it was theoretically going to be something I used across my work and personal life for years to come.

The thing is though, for the right piece of hardware I actually would spend this amount of money on a piece of hardware. My current desktop gaming PC at home probably has that value of parts in it by this point (albeit spent incrementally over the course of years rather than immediately in minutes), and if I could get a laptop that’s suitable for both work and gaming for years to come then I could be tempted to spend that much.

But I’d only do so if what I was buying was completely perfect. That means an eGPU experience that’s as plug-and-play as it’s possible to get, it means a keyboard that can stand the test of time all while being nice to type on, and it means just giving me the damn dongles I need right there in the box.

Apple’s 2018 MacBook Pros didn’t quite do it for me, but there’s always next year…

What do you think of the new hardware? Let us know @TrustedReviews.