They might look very similar at first glance, but there are several key differences between the Xiaomi Mi Watch and the Apple Watch Series 5.

Xiaomi’s first Mi-branded smartwatch will go head-to-head with the bestselling Apple Watch Series 5 upon release. Does the Xiaomi Mi Watch have what it takes to topple the wearable we described as “the best smartwatch on the market”? Or can it at least be a canny cut-price alternative?

First things first: the two watches look almost identical. Both have a square shape with rounded corners and a single crown on the side, and since Apple first released this design back in 2015, it’s fair to say that Xiaomi has liberally taken “inspiration” from its rival. 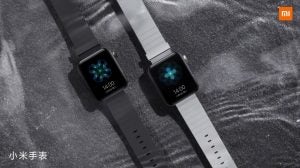 But despite the similarity in looks, there is a difference in construction: the Mi Watch casing is made from ceramic, while the Apple Watch Series 5 is also available in aluminium or titanium.

The Apple Watch Series 5 is available in two different case sizes: 40mm and 44mm. The former has a 1.57-inch AMOLED screen, while the latter measures 1.78-inches. This iteration is the first that has an always-on display, and what’s more it has a refresh rate that varies between 60Hz and 1Hz for greater efficiency. 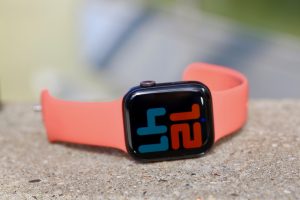 The Xiaomi Mi Watch is only available in the 44mm case size and has a 1.78-inch screen size. The display is also an AMOLED, always-on affair, but it lacks the variable refresh rate that sets Apple’s offering apart.

The Apple Watch’s battery is certainly not its strongest suit. We found that it lasts approximately 18 hours, meaning you’ll have to charge it every night if you want it to see you through the next day.

That’s not an appreciable improvement on previous iterations of the wearable, perhaps because of the extra energy needed to power the new always-on feature.

On the other hand, the Mi Watch seems to boast a fairly impressive battery. At 570mAh it’s the largest-capacity battery to be found in a smartwatch, and it claims to deliver 36 hours of continuous usage. We’ll have to test it thoroughly once we have our review unit in to see whether these claims are true. 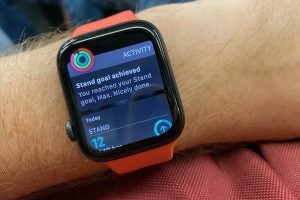 The Apple Watch’s software is one of it’s greatest attributes. It helpfully encourages you to move and get fitter, while the App Store offers a vast range of apps for all sorts of your needs. This is backed up by its hardware in the form of a speedy S5 chip, along with potentially life-saving features like fall detection, and an ECG.

The Xiaomi Mi Watch will bring MIUI to the wearables market (overlaid on Google’s WearOS), but we aren’t too optimistic about this arrangement. Firstly, the watch is reputed to hold over 40 pre-installed apps — and it’s doubtful that they’re all essential. Moreover, Google’s WearOS simply doesn’t offer the same range of great apps as Apple’s software does at this point in time, which is frustrating when you want to get the most out of your new hardware.

This is just an early vs, looking at the few details we know about the Mi Watch. Once we’ve fully tested it we’ll update this page with further thoughts.