When someone says ‘portrait of a lady’, thoughts immediately dart to the Mona Lisa. In the same way, the words ‘massively multiplayer online role-playing game’ (or MMORPG) have become synonymous with World of Warcraft. There will be weapons, there will be lots of number crunching, and there will be a horrific, soul-destroying grind.

Worlds Adrift is an MMO that features none of the above. In my visit to Bossa Studios, the creators of Surgeon Simulator and I Am Bread were keen to state that the game is massive, multiplayer, and very much online, but they want to reimagine the genre away from its obsession with the numerical. Where WoW is the king of abstract +10 damage modifiers, Worlds Adrift is aiming to be the king of the physical, where substance and force rule all.

The first thing to note about Bossa’s newfangled MMO is that it takes place in islands floating in the sky. Its sparse landscape (skyscape?) is a kind of pastoral Bespin repeated hundreds of times, where rocky outcrops casually float in every direction. The effect is dramatic, but the immediate question to enter my head was: How do you make a game out of this? 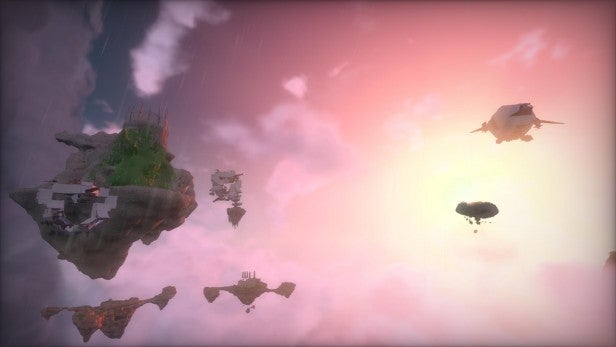 The answer to that question is simple: travel. Worlds Adrift isn’t predicated on the advance of the individual, but on the environment itself – how it can be manipulated, and which locations are accessible. Where other MMOs seek to increase a player’s level and offer them access to ever-increasing skills, this game offers riches of a different sort. Exploration, collecting and wonder are the non-metric measures of the game’s experience.

There are two key objects in Worlds Adrift’s environment of ‘things’: players and ships. Players can explore the various islands by running around, swinging via rope-gadgets and, if they’ve collected the right equipment, gliding with wings. The other important element is the use of airships, which is how players transport themselves from island to island.

As I’ve already iterated, ad nauseum, players have no stats to increase, but can collect items which assist them in performing specific tasks such as killing the world’s pesky stingrays that can attack at any moment, or moving about the environment with ease. Collecting resources and pre-assembled parts allows players to construct airships and wander the skies. To what end? ‘To boldly go where no floating thingmajig has gone before’ is the only clear answer. 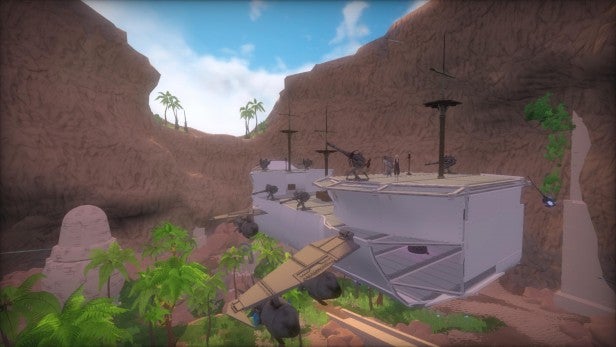 Bossa Studios has deliberately avoided embedding a linear campaign to steer and direct players in a chosen direction, because the studio’s vision is of a world dominated by emergent systems. Environmental obstacles such as walls of ice or thunderstorms obstruct the player from moving into other areas of the frankly massive space, but these are not stepping blocks to a longer-term goal – instead they’re simply barriers which they hope players will wish to overcome as part of the game’s amorphous experience.

Besting a wall of thunder is achieved by constructing a ship hardy enough to withstand its violent attack. In a game where you can’t increase your damage modifier, you want to ride an impressive vessel, and within the bounds of set construction areas, players physically place each and every part of their ship. This doesn’t happen through an immersion-breaking custom UI; you actually have to walk up to a piece, pick it up, and then orientate yourself around a ship to place the part. Worlds Adrift always places emphasis on the physical, on movement rather than abstract menus.

Metallic frames form each ship’s basic shape, upon which mechanical pieces such as dials, meters and levers are placed, as well as the ship’s outer panelling to provide protection. The materials from which a ship is constructed define its properties. Slap a few slabs of wood on its outer shell and it will be a fragile beast, but encircle it with hunks of metal and it’ll be more likely to brave the storm.

Taking off on my first voyage, I took flight on a boat made from a Frankensteinian hodge-podge of ill-placed wood and steel. From the moment of take-off, I was savaged by flying stingrays determined to peel away the ship’s most vital components. Cannon built onto the deck were semi-useful in dispatching these beasts, but many simply latched themselves on to the underside of the hull, where they caused mayhem. 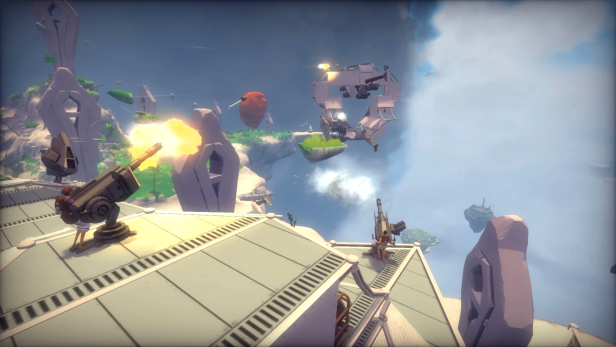 My shipmate, a developer, then suggested that we approach an environmental obstacle: a storm wall. Stingrays in tow, we sailed into the static plane of thunder and lightning. It was here that the ‘physics first’ nature of Worlds Adrift became abundantly clear. Every material is coded with properties of hardiness and weight and the ship was thrown around like a toy car in a tornado. The mast collapsed, the stingrays tore off engines, and eventually I plummeted into the screaming void.

You might wonder how this experience is synchronised between multiple players. In traditional MMOs, location, health and the casting of abilities are all that a central server has to deal with, but in Worlds Adrift every object’s movement is identically replicated on each player’s screen. To prove the point, a developer moved us toward a tree. He sliced off a hefty branch, and in perfect sync, the pair dropped and bounced on both my screen and his in exactly the same manner. The world of WA is a physically bound whole.

Within these systems the developers want players to create their own stories. The game’s producer delightedly informed me that there was already a 300-strong group within the game’s alpha that had formed a militarily aggressive stance, conducting pirate raids on other groups and ensuring they had stout ships with which to push forward and pilfer.

Here again Worlds Adrift shows its will to be different. My time on the SS Woody McWoodface taught me that attacking another ship would be a complex task. You have to fire cannonballs at enemies not to erode their vessel’s health bar, but to physically dislodge components and crew.

Apparently players have already found effective methods of using the game’s physics to their advantage. I was told a story of one crew which simply removed the engines from its airship mid-flight in order to collapse on the cruiser below and send it sinking into the endless depths. Thinking like a normal gamer will get you nowhere here; you have to apply real-world rules like never before.

I can see how the game’s lack of structure may turn Worlds Adrift into the Wild West. After a short hour or so within a world with no defined structure I was already pondering what would happen if I struck another player. Would we attempt to build a ship together? Would they steal my hand-crafted creation and ride into the sunset? It would only become clear upon meeting. 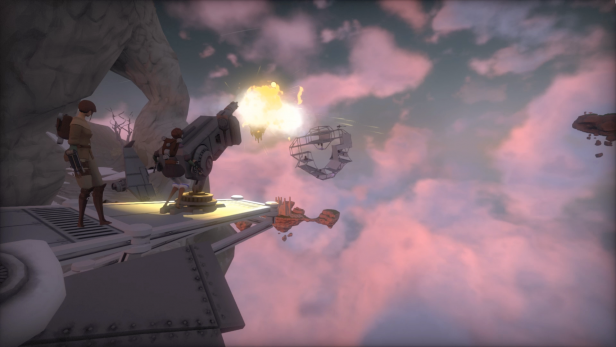 Bossa Studios is offering players the opportunity to create a land of their own, unfettered by the linear railroad tracks set by most MMO specialists. Players create their own ships, and they can even make their own islands using the game’s ‘island creation’ software, many products of which I saw during my travels across the skies.

I wasn’t allowed to participate in the game’s wider ecosystem with hundreds of other players, but my time within Worlds Adrift left me curious to see what shape this would take. There aren’t many studios willing to abandon traditional systems and create something daring, but Bossa is continuing its tradition of defying the norm. This game will never be WoW, but that’s a blessing, because whatever Worlds Adrift does eventually become, I doubt there will be anything else like it.