To see how far Microsoft Windows has come from the days when sideways baseball caps were still cool, Simon Osborne-Walker is taking a tech trip back to 1995…

I remember the first time I used Windows 95. It felt like the future.

It’s hard to believe that it’s been 20 years since the day I first booted up that shiny new operating system, and began to familiarise myself with its myriad innovations.

And now, two decades later, I’m getting the same tingle from exploring the world of Windows 10.

So hey, I thought, wouldn’t it be interesting to turn back the clock and see just how far we’ve come between these two landmark versions of Windows? Yep, I’m gonna live like it’s the last millennium, like Michael Jordan’s still dunking, the Spice Girls have only just started singing, and the only “social media” are the journalists you don’t mind talking to.

I’m going through the time tunnel. (Actually it’s more of a door. The door to my office, where I’ve assembled a mountain of awesome mid-’90s gear to help me take my rose-tinted journey.) 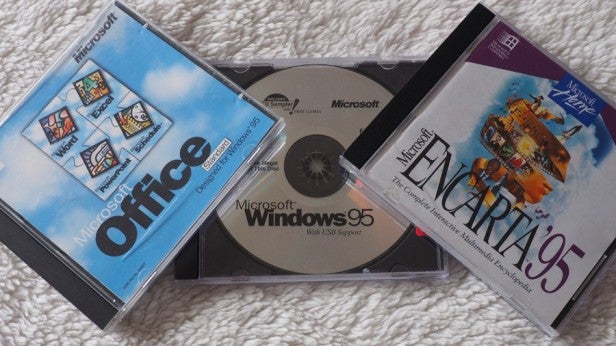 I’m sat here, with a rather utilitarian laptop in front of me. You forget how much sleeker and sexier today’s hybrid devices are than the chunky plastic slabs that pioneered portable computing. But in 1995, being able to sling your computer in a bag and it not break your shoulder was no mean feat.

My finger hovers over the power button. Wait. I’m not ready. I need to get in the mood.

First I have to jazz up this laptop. Everyone who watched the 1995 movie Hackers knows that laptops need stickers. Much as I hunt for stickers for Friends of the Earth, Rage Against the Machine, or even some simple smiley faces, all I discover is a pile of my daughter’s sticker books. They’ll have to do.

My ‘90s hacker name will just have to be Toxic Unicorn or something.

Next is a trip to the wardrobe. If there were a hole through the back of mine, it’d lead to a magical land inhabited by Ice T and the Backstreet Boys in their heyday. Chicago Bulls baseball cap: sideways. Tommy Hilfiger jacket: gleaming white. Reebok Pump trainers: pumped. 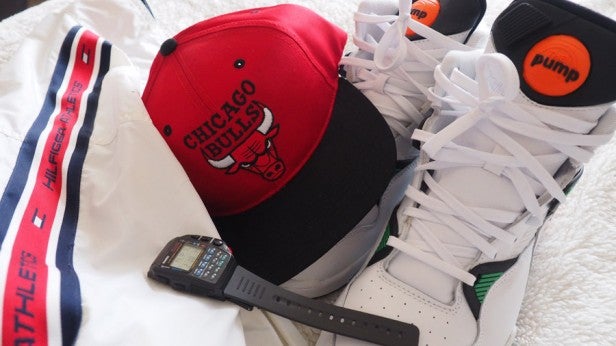 Windows 95 fires up and I’m reminded how this great OS formed the blueprint for generations of Windows operating systems. Among so many firsts, the most iconic is the Start Menu in the bottom-left corner, offering a shortcut to settings, documents and programs. Then there’s Internet Explorer, which also made its debut on Windows 95 and went on to become the world’s go-to web browser.

Remember this was also the birth of plug-and-play. It wasn’t always perfect, but for an OS to recognise new hardware and assist in finding software to run it was revolutionary. We take all that for granted now.

I’m now writing this in Office 95, by the way. It’s still so very familiar, and still covers so many of the word-processing basics. I’m only sad that this was before the introduction of the Office Assistant, that characterful paperclip we were all so fond of, right? (Sources tell me Clippy’s retired and living in a condo in Bill Gates’s back yard.) 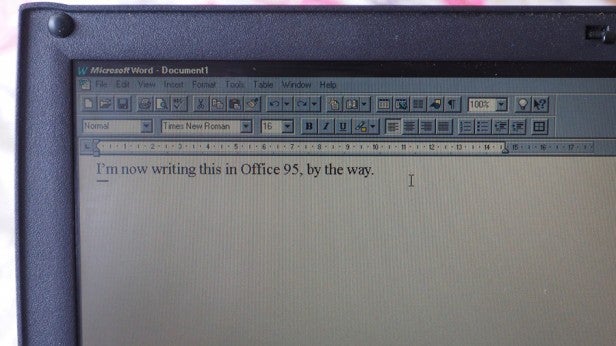 I’d forgotten how Office used to pin a taskbar to the top of your desktop, so you could shortcut straight to a new document. In a working world before computers diversified so much, where the Office suite might have been one of the few programs installed on a PC, this made such a lot of sense.

As the cursor starts to stutter across the screen, I begin to panic that my 20-year-old PC’s about to head to Silicon Heaven. Then I remember that this old mouse – which I not only had to plug in, but to plug into a PS/2 port! – has been trundling around my desk on a rubber ball. All mice did it once upon a time, but how soon we forget. It used to seem a chore emptying the fluff out from around that ball; now it’s a surprisingly therapeutic enforced screen break. 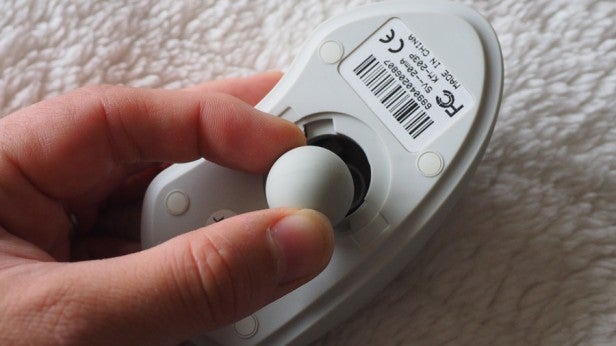 There’s a part of me that enjoys the simplicity of using Windows 95 and Office 95 on my be-stickered slab of a PC. But now it’s time to check emails and look up a few facts on the internet. Trouble is, my vintage laptop has no built-in Wi-Fi and even after I’ve carted it out and sat it down next to my inconveniently placed router, I can’t remember where I left the Ethernet cables that I haven’t had to use since I last experimented with streaming music from network-attached storage.

With no internet to use for research purposes nor, indeed, for idle browsing, my eyes turn to a copy of Microsoft Encarta ’95 that’s sat on my desk. Was there a Windows 95 PC that wasn’t sold with a free copy of the Encarta digital encyclopedia? I pop it into the CD drive and trawl through for the animations and interactive elements. The Solar System animation was always the one you used to impress friends. 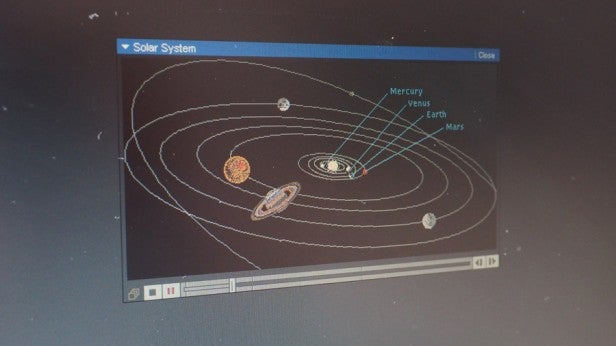 I call the office – on a classic Nokia 808, no less – just to let them know I’m having email trouble. I don’t tell them how much I’m enjoying myself, nor what I’m wearing.

Back to the future

It’s been fun, but work’s mounting up. For a while at least, the boyband outfit’s back in the wardrobe and I’m tapping away on something far more suited to modern life. 2015’s working tool has to be powerful, properly portable and have more functions than a Swiss Army knife.

Just such a tool is the Microsoft Surface Pro 3, freshly equipped with Windows 10. 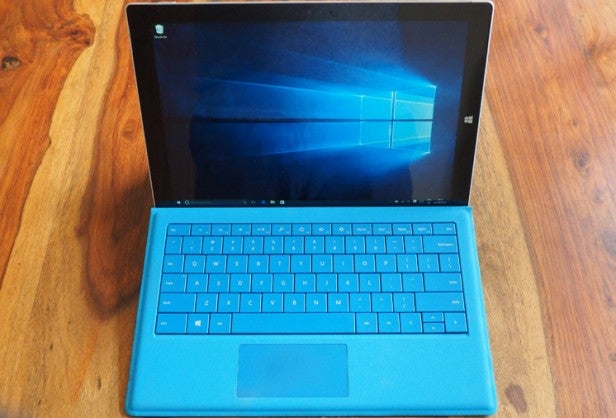 It might look slim and lifestyle-friendly – because it is – but there’s serious power hidden in that sleek frame. This is a proper computer, nay a touch-enabled super-device complete with a smart pen, not just a tablet with a fancy-pants keyboard cover.

Talking of the keyboard, it might be thin but it’s a lot more pleasant to type on than that 20-year-old laptop. I’m really motoring through these words. Just as well, because there’s so much more to do these days – and that’s why we need do-it-all devices that can keep up and not waste our precious time.

I tap the Windows key to pop open the Windows 10 Start Menu. In here I’ve got live tiles showing me a snapshot of new emails – someone else offering to help out with a PPI claim – as well as social media networks, calendar entries, news headlines and more.

Everything I need in my working day is there, easily accessible. 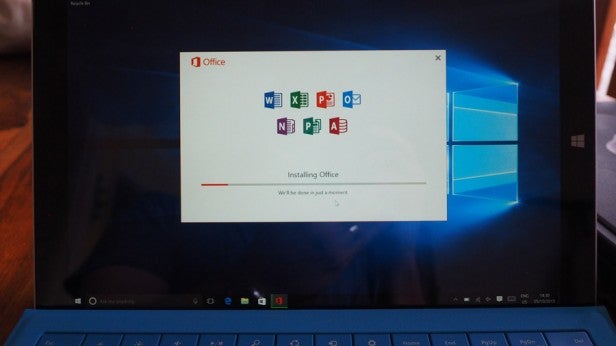 The experience of using the new Office 365, now with the new Office 2016 apps, isn’t just about writing or compiling spreadsheets and presentations; it’s about collaboration and cloud storage. While writing this document I’ve shared it with a colleague in just one click. He can now edit it and make comments in real time while I’m still typing. Working remotely has never been easier than this.

I write my own comment: “Don’t even THINK about making any changes. It’s a masterpiece and you know it.”

I’ve also got Skype pinned in my Start Menu. I’m about to click it open for a quick catch-up with the peeps in the office, but stop myself. My hair’s a right mess. Video calling is amazing, but it does have one downside. Maybe later. 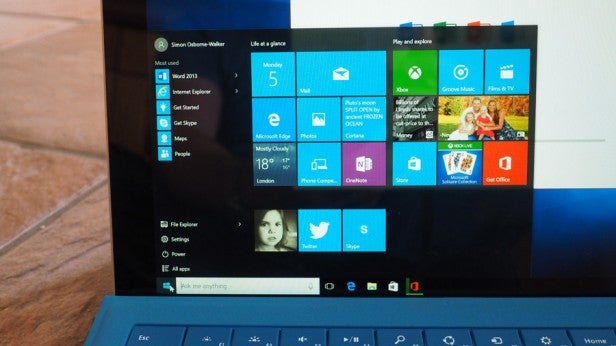 I check my emails instead, and I’m suddenly reminded of the first time I encountered Hotmail – now Outlook.com. I have a feeling I signed up for my free Hotmail email account around 1995, but I can’t be sure. I ask Cortana. She’s my new personal digital assistant, don’tcha know, sitting at her own virtual desk within Windows 10.

“When was Hotmail launched?” I say aloud. Cortana instantly points me to a search result in Bing: July 4, 1996. I wasn’t far off.

What I wouldn’t have done for research tools like that 20 years ago.

Never mind the hair, I stick my baseball cap back on and Skype the office to tell them that I now like Cortana better than them.