To see what a difference the past two decades has made to Microsoft Windows, Simon Osborne-Walker has played Alanis Morissette’s “Ironic” on loop until it transported him back to 1995…

In case you missed the first part of this experiment… Actually, what am I saying, just go back and check out Windows 10 vs Windows 95: Part 1. There’ll be a quiz later.

But anyway, here’s a quick catch-up: I’ve decided to take a tech trip back in time, using 20-year-old hardware and software (not to mention clothing) to see how Windows 95 and our tech ecosystem has evolved.

Time to turn my baseball cap sideways and get some air into those Reebok Pump trainers.

I’m sat here, fully immersed in the ‘90s, racking my brains. It’s pretty tough to think of something when you’ve got “Cotton Eye Joe” by Rednex charging around your mind like a rodeo bull wearing a Gingham dress and swinging a banjo from its tail.

What’s troubling me is that I know I didn’t get my first personal email account until 1996, when Hotmail (now Outlook.com) launched and offered the world free email. So how did I keep in touch with people before that?

My eyes drop away from the Windows 95 laptop I’ve been staring at for the past half-hour and down to the vintage Nokia 808 mobile phone I’m using. I say “using”, but I struggled to get reception anywhere for ages until I realised it has a pull-up aerial. Remember those? I pick it up and try to think who I should call. I remember the aerial this time. 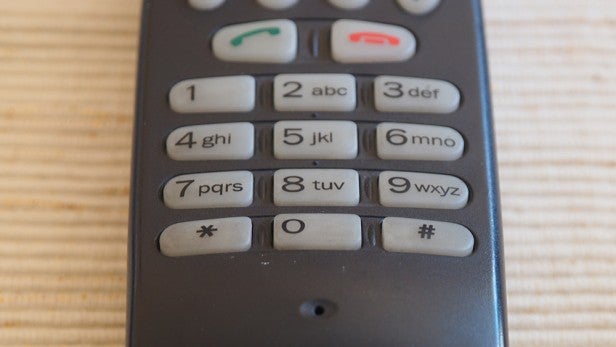 Blimey, this feels a bit active. I’ve got used to lurking on Twitter or Facebook, waiting for someone I like to write something interesting so that I can react to it in some witty or well-informed manner, prompting fellow passively social lurkers to join in so we can all chortle, chin-stroke or shake our heads disapprovingly before picking out an appropriate emoji.

The idea of just phoning a contact out of the blue and starting a random conversation is terrifying now.

After ten minutes of re-teaching myself how to type a message using a numberpad – how did we ever live with pressing the 3 key three times just to get an “i”? – I put the phone down in frustration. I have a new-found admiration for those people who could pop out hundreds of texts daily on these early mobiles.

By force of habit my hand hovers back to the laptop – and inspiration strikes with the force of Eric Cantona kicking a Palace fan on that infamous night in ‘95.

I open Word 95 and start doing something I haven’t done for, well, maybe 20 years. I’m writing a letter to someone I both know and like, and it’s nothing to do with a job application. And guess what… I’m going to print it out. 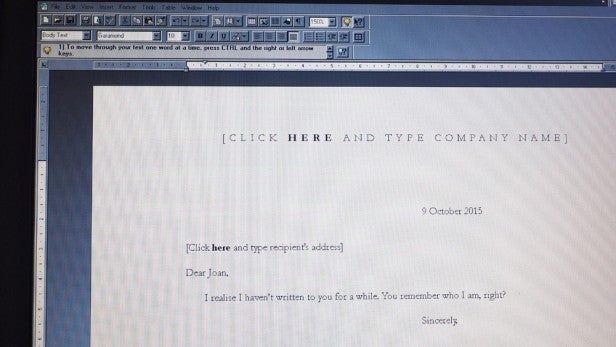 Before personal email and social media, this was how we kept in touch, right? We wrote letters and sent the hard copy. I could even pop a photo in the envelope.

I feel pretty pleased with myself as I finish up. Insights into some of the greatest figures in history have come from their correspondence, and I’m crafting a scrap of valuable evidence that some future historian might use when they finally recognise my underappreciated greatness in generations to come.

I feel rather less pleased with myself – not to mention seriously doubtful of my greatness – when I realise my printer is wireless, and if it ever came with a USB cable, I don’t remember where it is. This is the whole Ethernet-and-router debacle all over again.

Oh well, I didn’t have an envelope or stamp anyway. And the film for my circa-’95 Canon film camera turns out to be tougher to get developed than I thought. Perhaps if I’d bought colour film instead of artsy black-and-white I wouldn’t be looking at a two-week turnaround for getting prints to share with my intended pen-pal.

There was no easy digital editing and uploading in 1995, but at least we had one-hour developing and all our photos, even the ones where we had our finger over the lens, got printed. (Note to 2015 self: print more digital photos.)

Writing a letter properly did make me feel all warm and fuzzy, though, and using Word 95 came as naturally as picking up a pen. I vow to myself to write more letters (but not to bother with film cameras).

I have one other thought before stepping back into the 21 century: Do people still use chatrooms and IRC?

I don’t think I want to go there.

I’m done with 1995 for today. Just as well, because the relentless rustling of my shiny white Hilfiger jacket has given me a headache.
I’ll be honest, I’ve also felt woefully out of touch and in need of company.

Once again I open Windows 10 on my Microsoft Surface Pro 3 and hit the Windows key to launch the Start Menu. I’ve got new emails, I can see an old work colleague’s face peering out of the Facebook tile, and the world seems right again.

Twitter notifications pop up in the corner of my screen even as I’m watching amusing videos on Facebook (no, you’re right, I didn’t believe what happened next) and deleting email jokes from my mum that have only just reached her from five years ago when the rest of us first read them.

I open up the Microsoft Edge browser to find out more about something I saw mentioned on Twitter about a rare dinosaur skeleton expected to reach half a million pounds at auction. I go ahead and ask Cortana, who takes me to an article with more details, so I click on Make A Web Note and highlight a couple of passages before annotating it with a note. “You were asking what I wanted for my birthday…” I click the Share button and email the annotated page to my wife. (She’s never replied, but I’m guessing she wants to keep it as a birthday surprise.) 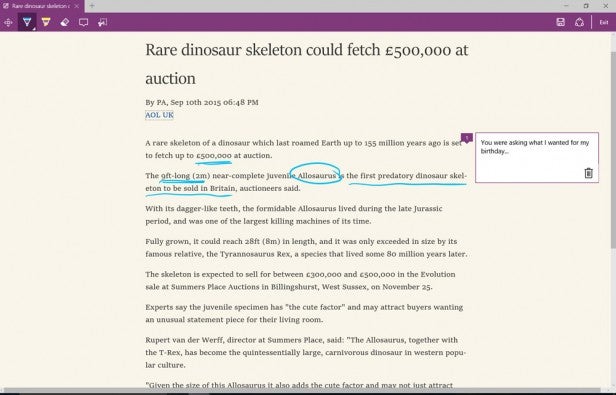 It’s the evening now, and my brother’s awake in Australia. I know he is, because I’ve opened up Skype and I can see the little green tick next to his name. If I didn’t have Skype video calling, I’d only have seen him and his family once in the past three years since he emigrated.

It’s about time I Skyped him again. Anyway, he might have a good idea of where I could mount a 9-foot-long Allosaurus.