TomTom has announced a number of new driving products at IFA 2016, including a dedicated performance tracker for your car, opening up a whole new world of gamified driving.

The TomTom Curfer can tell you in-depth information about your car, including details on cornering G-force, acceleration, and even braking efficiency. TomTom reckons this will offer up all kinds of benefits, including helping drivers save money on fuel, brakes, and tyre costs by helping them drive more efficiently.

“, saving money, and reducing their impact on the environment,” said Corinne Vigreux, co-founder and MD of TomTom Consumer. “I like to think of the TomTom Curfer as a translator between the driver and their car – helping people to make better decisions about their driving style in a really fun and engaging way.”

The TomTom Curfer also lets you find your car from your phone’s map, as well as tracking a car’s battery voltage, oil temperature, and engine load. If any of these levels enter the red zone, you get an alert that will warn you that the car might not be running as it should be.

To connect the Curfer, you just plug it into the OBD – that’s the On Board Diagnostics. This is found on most cars made after 2011, so make sure to check you have a compatible model first. Once that’s in, you then connect the Curfer to a smartphone via Bluetooth. The app features social sharing and game-like features, apparently.

You can pre-order the TomTom Curfer right now in the UK, Germany, France, and the Netherlands for £59.99.

TomTom has also created what it believes is the world’s first smartphone-connected sat nav for scooters. The TomTom Vio sports a circular, glove-friendly touchscreen, features a weatherproof build, and offers turn-by-turn navigation visually, and audibly via a Bluetooth helmet audio system. This means you can also take calls using the sat nav. 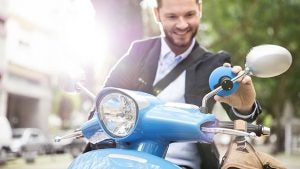 The TomTom Vio also features TomTom’s renowned speed camera warning system. The speed display will change to a red colour to warn riders if they’re going too fast, and reverts to its original colour once the scooter is travelling within the speed limit.

You can pick up the TomTom Vio at Halfords, Amazon, and the TomTom website from September 8, for a price of £149.99. It ships with a black, snap-on silicon cover, but there are six other colours also available for purchase separately.

TomTom has also updated its TomTom Go sat nav range, bringing a number of improvements to the popular flagship series.

TomTom says that updates are now all automatic, which puts an end to wired, computer-borne updates. You can also get real-time traffic information and Lifetime Services as a bonus at no additional cost. There’s also voice recognition using developed AI platforms like Siri for “accurate responses”.

The new TomTom Go sat nav have a bunch of smart features, including reading out text messages, allowing hands-free calling, and all work with Apple’s Siri, Google Now, and Microsoft’s Cortana.

What’s more, the next-gem TomTom Go series will learn your habits. For instance, it can predict your destination, so if you regularly commute at a certain time, it will guess at where you’re going. This means the TomTom Go will manage everything automatically, including avoiding traffic, from the outset. You’ll also get the usual speed camera alerts. 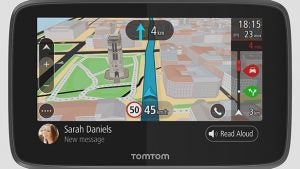 There are four different versions of the new TomTom Go, each of which features a quad-core processor and a “sleek finish”. The top-end TomTom Go 5200 and 6200 come in 5-inch and 6-inch variants, and both feature SIMs for live updates. There’s also more affordable models in the form of the TomTom Go 520 and 620, which also ship in 5-inch and 6-inch variants respectively. However, these models require a smartphone connection for live alerts on traffic and speed cameras.

TomTom will be retailing its new range in September at select retailers, including Halfords. Pricing starts at £219.99 for the Go 520 (with European maps), while the most expensive model, the Go 6200, will set you back a hefty £359.99.

Related: When is Black Friday?

What do you think of TomTom’s latest wares? Let us know in the comments.