Sky Mobile has officially unveiled its first batch of SIM-only UK price plans and promised even bigger things to come in 2017 – including hinting at a potential ‘special relationship’ with Apple and Samsung on contract deals.

Sky made its fair share of headlines in 2016. It became the first major UK TV provider to debut a 4K-ready set-top box – Sky Q – before launching said Sky Ultra HD service in earnest, but the telecoms firm isn’t done just yet.

The company has just announced details of Sky Mobile – its MVNO offering that will piggyback on O2’s slice of the UK’s 4G spectrum – and there’s a few interesting early talking points.

Here’s our take on all the latest developments.

According to the nascent network, Sky Mobile will feature four key propositions, starting with Roll, which will see users able to stash leftover data from their monthly 4G allowance in a ‘piggybank’ – you’ll be able to dip into this for data top-ups as and when you please for up to three years.

Next up is Mix, which is a basically a branded way of saying that Sky Mobile will allow subscribers to upgrade or downgrade their data plans on a rolling monthly basis – once you’ve consumed 80% of your allowance, you’ll be asked if you’d like to jump to a higher tariff, or vice-versa.

New or existing Sky customers also won’t have to pay for calls or texts should they wish to utilise Sky Mobile – you’ll get an unlimited amount of both on up to five SIMs – while the Sync feature will give subscribers access to their Sky content on-the-go, either on a streaming or offline basis. 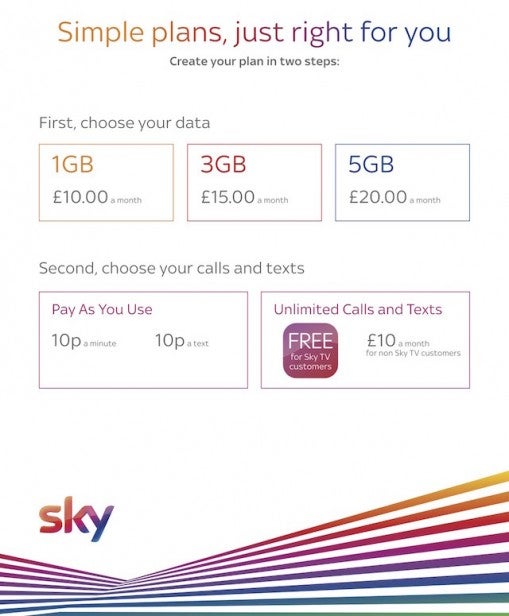 Non-Sky TV customers can add unlimited calls and texts for an extra £10 a month, or roll the dice on PAYG charges, which are set at 10p a minute for calls, and 10p a text.

So far, so predictable? Hang on a sec, because there’s (potentially) a bit more to it than that.

Speaking to TrustedReviews ahead of the Sky Mobile announcement, Sky Director of Converged Products Vince Russell told us that the telecoms firm had plans to debut a range of contract plans in 2017. While specifics weren’t divulged, a spring 2017 launch was confirmed.

Unlike other MVNOs, Russell disclosed, Sky would be negotiating directly with handset manufacturers, meaning Apple and Samsung are likely being lined up as launch partners:

“The way we’ve built our mobile network is deeper than anyone’s every built an MVNO in the UK. We have the relationship direct with the handset manufacturer – we have that direct relationship with Apple. That’s with us – it’s not with [O2 parent company] Telefónica.”

He added: “We’ll unveil the elements of that proposition in the new year”

Galaxy S8 and iPhone 8 exclusives? That might be a bit too speculative. I don’t think that Sky Mobile – in its initial MVNO guise, at least – will get out-and-out rights to the likes of an iPhone or Galaxy S handset next year.

But that’s not to say that some form of exclusivity is impossible, be it a special early access offer for Sky customers, or even a unique flavour of one of those smartphones.

Russell also said that Sky Mobile would “keep an open mind” when it came to future plays in the smartphone market – we queried its potential 5G plans and the possibility that it could one day manufacture its own handsets. In other words, Sky just made one major reveal – but goddamn, it teased a whole hell of a lot more.

What do you think of Sky Mobile’s SIM-only price plans? Let us know in the comments below.