If you’re setting off for EGX this weekend (or even if you not) you might be wondering what new indie games you should be checking out. Sure you’ve probably already heard of Wargroove or Disco Elysium, but what new, more obscure games should you be paying attention to?  Well I’ve been wandering the show floor for the last two days trying to answer exactly that question, and here are my personal picks.

Kine is a musical puzzle game by former Bioshock Infinite and Flame and the Flood animator Gwen Frey, who created the entire game by herself in her spare time (apart from the music, which is by Michael Wong). The idea is to rotate a set of instruments across a series of platforming levels, with the unique shape of each instrument providing different challenges. The accordion, for example, can open and close to cross gaps. It’s hard to explain in words but easy to understand if you watch the terrific trailer embedded above. Cleverly the music underscores your efforts, so you know if you’ve made the wrong move because a dud note will play. You can find Kine in the Leftfield collection.

If you haven’t heard of The Bradwell Conspiracy, that’s because it was announced less than a month ago, but developer Brave Plan have been secretly working on it since 2014. You play as an innocent museum goer trapped in an exhibit funded by the sinister (?) Bradwell Corporation, as your like-it-but-not-legally-like-it google glass ineptly tries to navigate you to safety. As things get more complicated you venture into Bradwell’s secretive Research & Development department, and some light portal-esque puzzling ensues. The Bradwell Conspiracy has a great sense of humour, some really interesting locations to explore and a surprise celebrity voice cameo that I won’t spoil for you. You can find it in Rezzed Zone North. 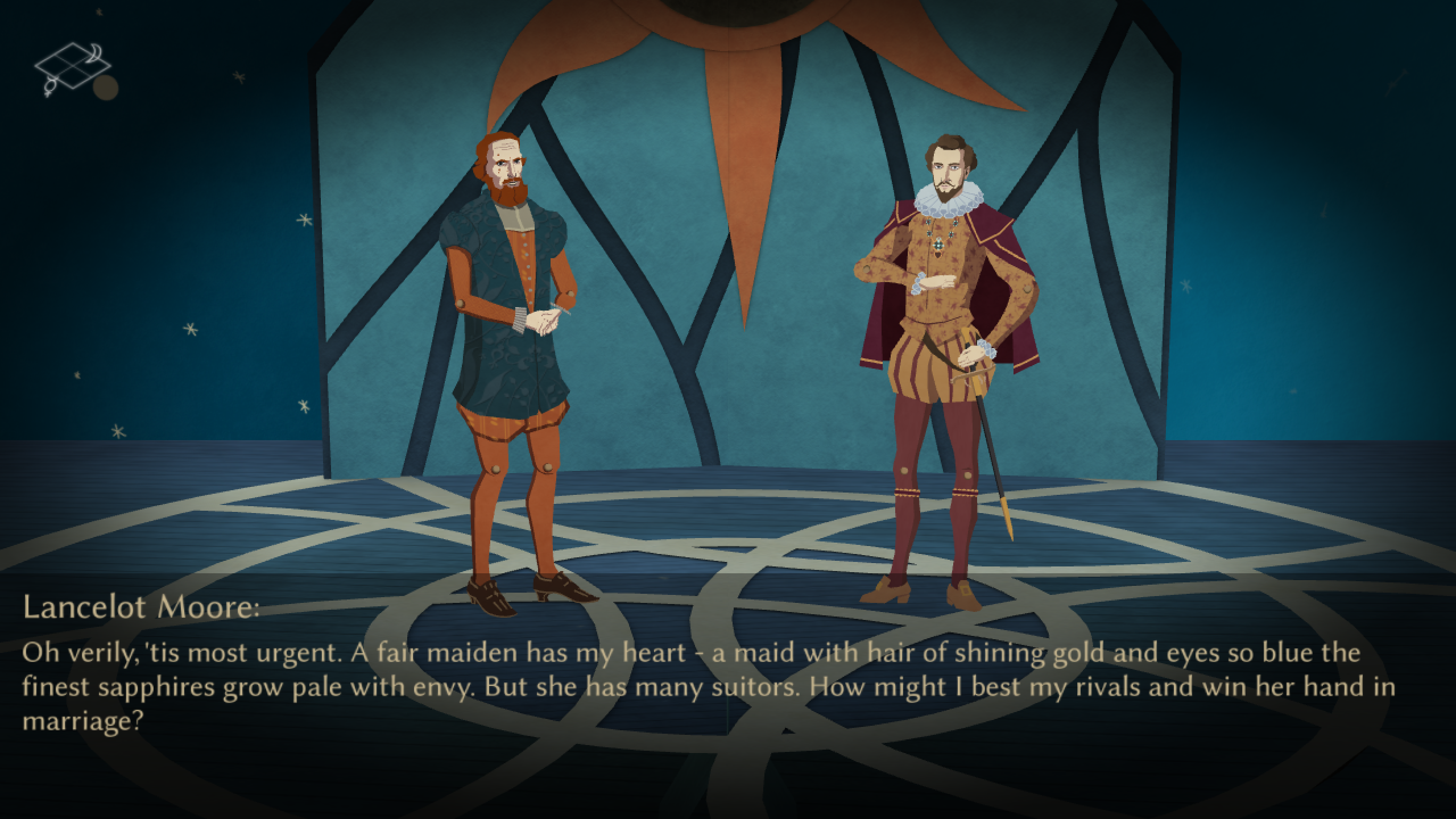 This isn’t the first time I’ve encountered  this gorgeous Elizabethan pop up book at a convention, but this year’s update adds voice acting and a much stronger sense of humour. You play as real life historical figure Simon Forman, a “Doctor” of Astrology who advises the Elizabethan gentry based on his broad interpretations of the meanings of stars. Although Forman insists his methods are scientific it’s left up to the player whether they want to go with their best guess, tell their customers what they want to hear or, in my case, deliberately troll them with bad advice. For example I told the chap up above that his best chance to get laid was to convert to puritanism, surprisingly he went along  with it. You can find Astrologaster in the Tentacle Collective (just look for the green inflatable tentacles).

Developed in collaboration with the BBC’s Blue Planet team, Beyond Blue puts you in the role of the nature documentarian. The demo lets you swim around a small section of ocean floor, observing the ocean life within. Think Subnautica without the survival elements, but lots of voice interjections from your crew on the surface. The whole thing has a real sense of wonder at the beauty of the natural world. Sadly there’s only a very shortl slice of ocean to explore in the demo, but the developers are promising much more, including a submarine hub to revisit, and the ability to program automated drones to explore for you. You can discover Beyond Blue in Rezzed Zone North.

Games usually take the Indiana Jones approach to archaeology: show up, solve some puzzles, grab the treasure and escape before the whole thing falls down. Heaven’s Vault, from 80 days Developers Inkle, goes in the opposite direction, charging you with exploring several planets worth of alien ruins in a less destructive fashion. The core of the game is translating and learning the alien language, with you forced to make your best guess at words from context and piece meaning together. Often you’ll get it wrong, I immediately assumed the building in the demo was a temple, but as I went along it became clear it was actually a garden, and changing my translation then made me reconsider other inscriptions and conversations I’d seen along the way. The whole thing is presented in a strange but haunting low framerate hand drawn style, where your character gently fades from one pose to another. You can find Heaven’s Vault in the Tentacle Collective.

You know, with the inflatable tentacles. 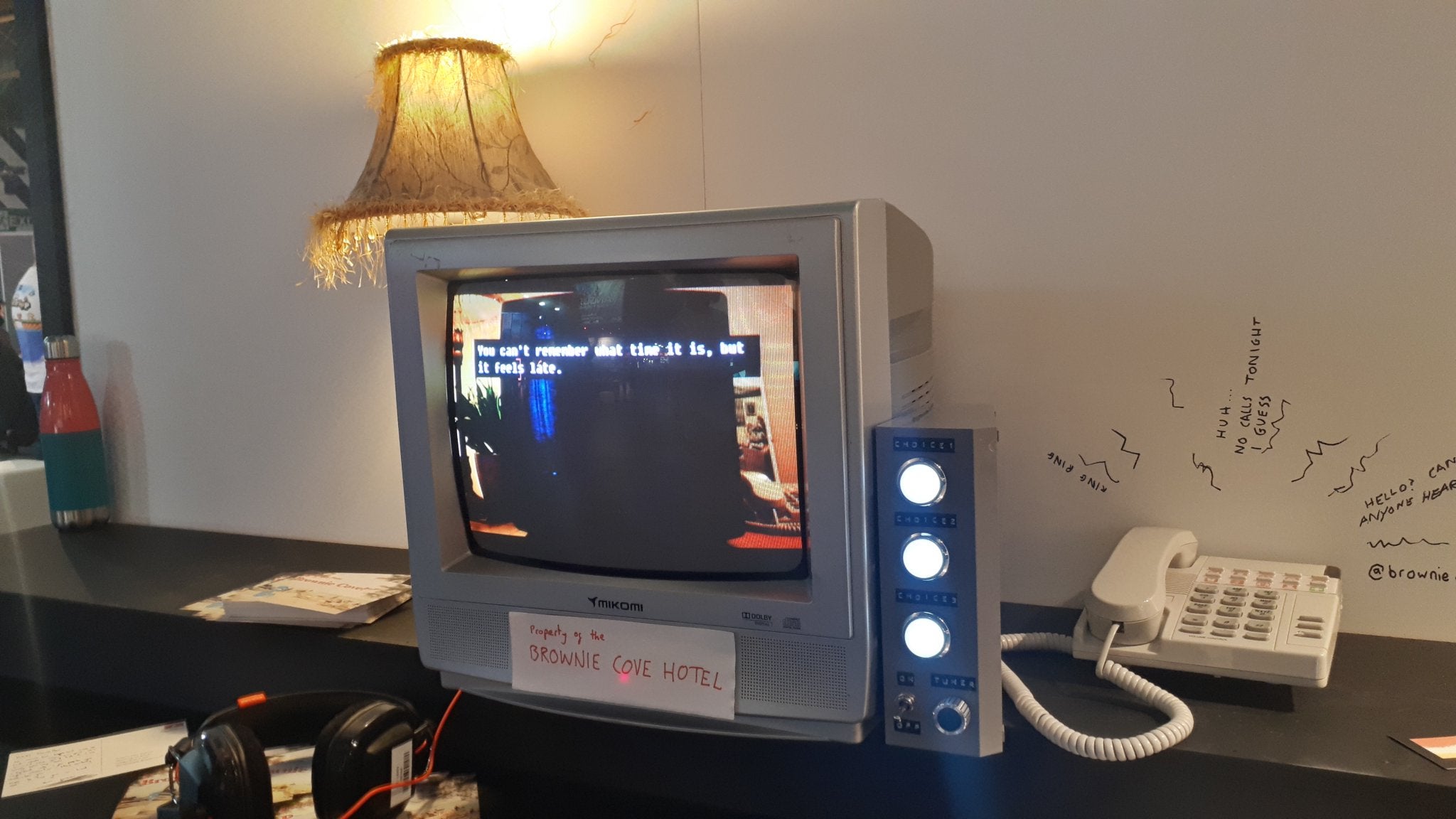 EGX’s Leftfield Collection is famous for always having at least one game with a strange custom hand built controller. Actually this year  there’s more than one, but Between Stations stands out. It’s about a person staying in a run down hotel and watching a creepy, possibly haunted old television, and for the show the creators have actually brought an actual old CRT TV and built a custom controller allowing you to hand tune it into different stations in order to play the game. You don’t have to play it this way, there’s a free online version at the link above, so you can scare yourself in the privacy of your own home, but if you’re at EGX you owe it to yourself to get the full experience