After a few years of build-up, Samsung has finally launched a MicroLED TV targeted at consumers. For everyone outside of Korea, we’ll have to wait a little longer to get it.

It’s been a while coming, but a couple years after Samsung announced its intention to make headway in the MicroLED TV market, it has unveiled its first effort aimed at consumers.

Related: What is MicroLED TV?

It is smaller than first-gen “The Wall” screen, but still big at 110-inches so be prepared to clear, well, everything out the way to find a home for it. Samsung’s MicroLED screens use micrometre-sized LED lights to eliminate the backlight and colour filters other displays rely on, and with the display self-illuminating, it produces light and colour from its own pixel structures, expressing 100% of the DCI and Adobe RGB colour gamut. This results in what Samsung says are “stunning, lifelike colours and accurate brightness”.

According to Samsung, its MicroLEDs can display peak brightness levels in every scene while also retaining fine detail, and won’t suffer from the burn-in issues that – ahem – affect some competitor displays.

The TV is virtually bezel-less, featuring a 99.99% screen-to-body ratio for an unrestricted view of the images. The TV is framed by a sleek metal edges and arrives prefabricated, ready for use as soon as you install it, rather than the modular set-up that MicroLEDs for B2B applications have used. Connections are TBD and we don’t have any info yet as to whether it’ll support OneConnect.

The MicroLED panel will support the new OTS Pro speaker system, delivering 5.1 channel sound. Whether it does this through actual physical speakers or through processing and algorithms we’re still yet to ascertain. 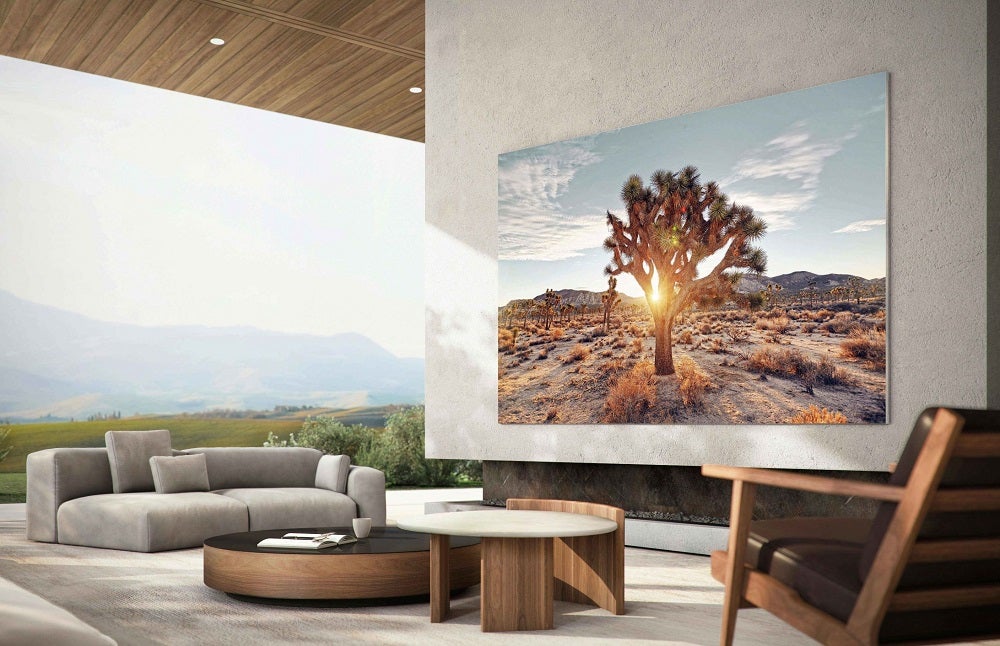 The TV will also support Samsung’s Multi View feature, allowing viewers to watch up to four sources of content simultaneously on what are effectively four 55-inch sized split screens. Those screens can be made up of different apps, external sources or for the multi-taskers out there, they can watch multiple sports at the same time.

Samsung also intends for its MicroLED TVs to last a very long time. With the display made out of inorganic materials, it is able to last up to 100,000 hours. To put that in words that you can wrap your head around, that’s around a decade of use.

Jonghee Han, President of Visual Display Business at Samsung Electronics, said: As consumers rely on their TVs now more than ever, we are incredibly excited to bring the 110-inch MicroLED to the commercial market. Samsung MicroLED is going to redefine what the premium at-home experiences mean for consumers around the world.”

There’s no word on price but presumably it will be in the realm of oil oligarchs and F1 race drivers rather than the person down the street. We do know, however, that the MicroLED TV is on sale Korea now, rolling out to the rest of the world in early 2021.