While the astonishing 292-inch, 8K version of 'The Wall' Samsung unveiled at CES 2020 might well be the single most jaw-dropping screen I’ve ever seen at any CES, the 75-inch model may be the most exciting

Samsung’s now-traditional CES First Look event this year was its most spectacular yet. Not least because it opened with the single most incredible-looking screen I’ve ever seen in the shape of a 292-inch, 8K version of the brand’s ‘Wall’ Micro LED technology.

This is, though, now the third CES First Look in a row where Samsung has gone big – literally – on MicroLED for its chest-thumping CES showcase. Yet so far no MicroLED panel has gone on sale for less than a six figure sum.

Related: MicroLED – Everything you need to know 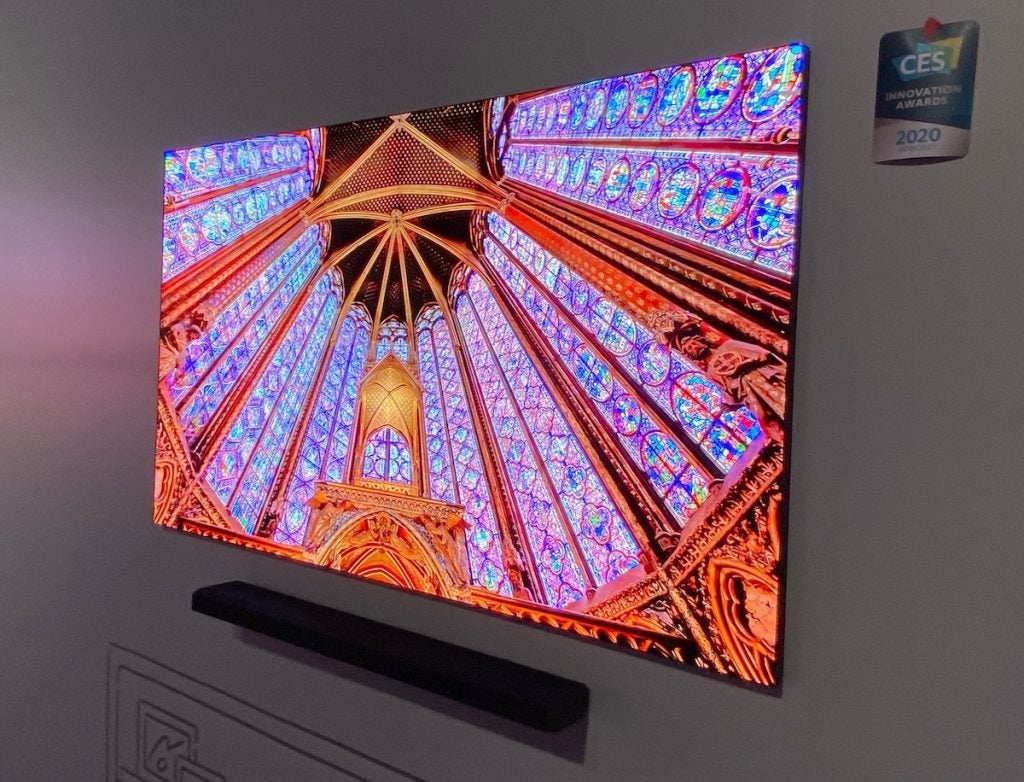 Samsung 75-inch The Wall MicroLED TV release date – No specific release, but it will be coming to market

Not surprisingly, then, once I’d stopped drooling in front of the 292-inch screen, my attention re-focussed pretty quickly onto a much smaller screen tucked away in a quieter MicroLED ‘zone’. This 75-inch ‘Wall’ is the smallest MicroLED screen Samsung has ever officially ranged.

Frustratingly the Korean brand still won’t commit to an actual on sale date for it, or a definite price. But the way Samsung representatives answered my questions about it very much suggested that this isn’t another ‘concept only’ MicroLED moment. This is a real product that will be coming to market.

Even just the idea that this could be coming to market is very good news indeed, since despite appearing in the shadow of the humongous, unfeasibly spectacular 292-inch screen, this 4K 75-inch MicroLED screen looked sensationally good.

Its charms are so far ranging that you actually have to concentrate to try and break the image down into its separate elements. Probably the single most mind-blowing attraction of the 75-inch screen’s images, though, is its sharpness and fine detail.

Shots of night-time cityscapes, shelves full of finely painted porcelain, stained glass windows… all these and more fine detail ‘classics’ looked phenomenally crisp, clean and three-dimensional. The vast ability MicroLED technology has for delineating colour and contrast with so much volume and dynamic range right down to pixel level has to be seen to be believed (and reminds you emphatically that detail is much more than just a matter of mere pixel numbers).

The 75-inch Wall’s sense of detail actually feels even greater than that of bigger Samsung Wall screens – presumably because of the pixel per inch effect. 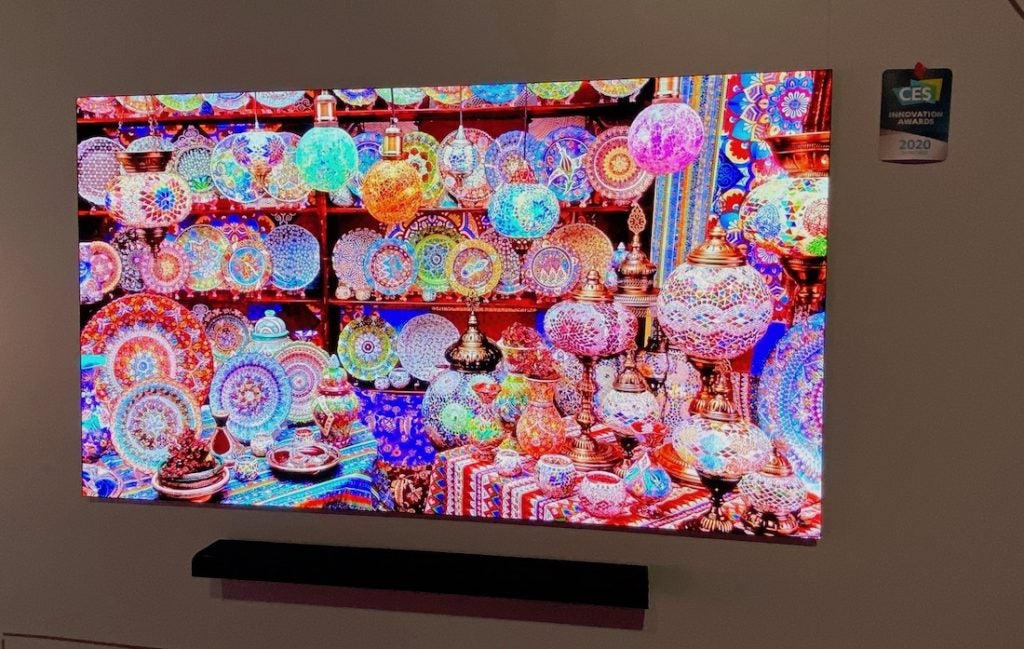 The 75-inch Wall’s brightness is also fearsome. But not, I hasten to add, in a way that feels overwhelming or ‘too much’. On the contrary, the way it pumps out such extreme levels of light at a per pixel level feels like the missing link in TV picture quality, contributing hugely to a sense of realism, fidelity and simple beauty that no other TV technology I’ve seen to date – bar Sony’s Crystal LED – can rival.

It’s weirdly as if every pixel counts, yet you’re not actually seeing pixels any more.

Despite all the brightness and colour richness the 75-inch Wall produces, its black levels are spectacular. Profoundly deep, natural in tone, and completely unaffected by any light seepage between neighbouring pixels. Essentially it’s like taking the best thing about OLED TVs and partnering with levels of brightness and colour volume that even go beyond what the best current LCD TV can do. 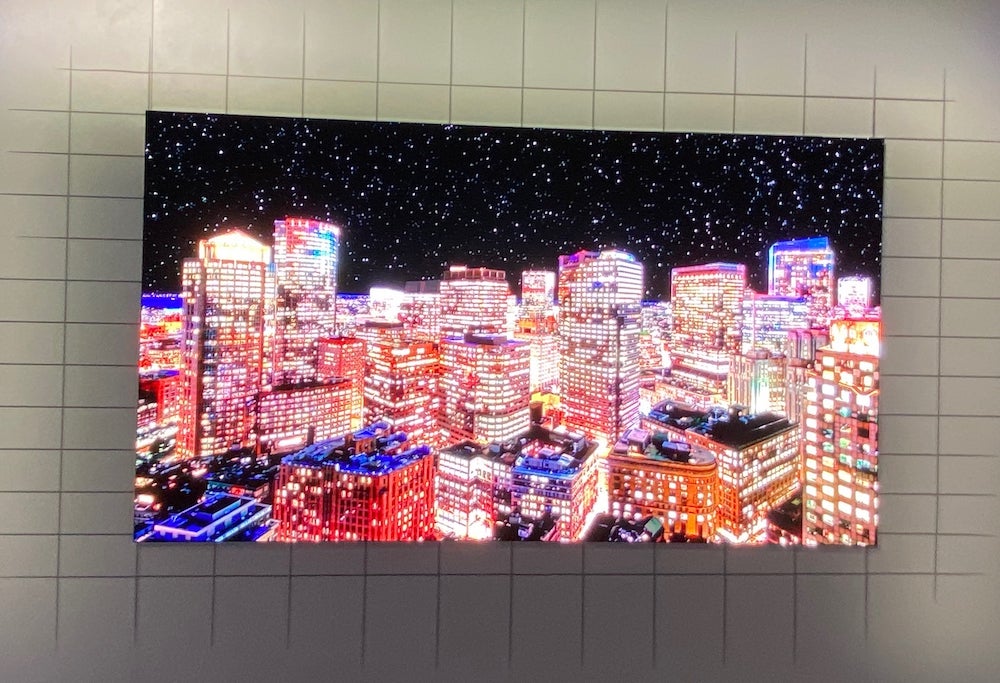 Even though it’s the smallest Wall MicroLED screen Samsung has shown to date, the 75-inch model is still built using a modular design. In other words, its 4K screen has to be put together from a cluster of smaller MicroLED blocks. Samsung seems to have really perfected the process for joining these blocks together now, though, making it almost impossible to see the joins.

The surface of the completed screen now looks completely, uniformly flat, too, with none of the slight variance in angles between different blocks that was noticeable on the first generation of MicroLED TVs a couple of years back.

Finally, all the 75-inch Wall’s picture glories are coming from a panel that’s deliriously thin, and which has practically no bezel. So its design is as futuristic as its picture quality.

While the astonishing 292-inch, 8K version of The Wall Samsung showed off at CES 2020 might well be the single most jaw-dropping screen I’ve ever seen at any CES, the 75-inch model may be the most exciting.

Why? Partly because in some ways its performance was the best I’ve seen from any non-8K MicroLED screen to date, but mostly because, eternal tech optimist that I am, it feels like a product which I might actually get to review at some point – and which richer versions of me might even be able to buy in the not too distant future.