The Samsung Galaxy Z Flip is the latest smartphone to join the foldable trend – so how does it compare to its lookalike, the nostalgic Motorola Razr?

Flip phones were all the rage back in 2005, and after years in the realm of darkness it now looks like they’re back in business again (let’s just say we’re not holding out hope for Myspace pulling off a similar feat anytime soon). So will you pick the resurrected Razr or the flash Galaxy Z Flip?

Samsung Galaxy Z Flip vs Motorola Razr – At a glance

In comparison, here’s what the Motorola Razr is packing. The chipset (when paired with that price) is a particular lowlight of the device, but fans may still be won over by the nostalgic form factor.

Design is surely the No.1 reason why you’re on this page right now, comparing these two devices. It’s the distinct edge these two phones have over the rest of the market, which otherwise seems to have been comprised solely of glassy black slabs for years now. Both catch the eye for their distinctive form factor, but here’s how the two compare directly. 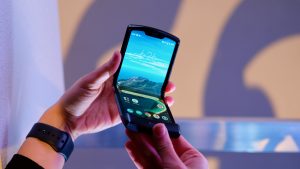 The Motorola Razr has a design advantage that money can’t buy – it has resurrected a beloved device, and with it the associated cultural cachet. With that, some design quirks that would otherwise be faux pas seem here to be endearing; the chunky chin at the bottom of the phone, for instance, turns heads rather than turning up noses. 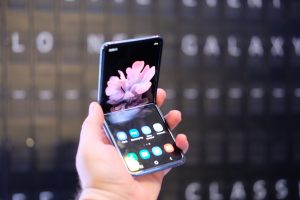 The Galaxy Z Flip takes notes from the Razr in its form factor (a significant change from the book-like Galaxy Fold), although its squarish look more closely resembles the GameBoy Advance SP than a traditional flip phone.

In some ways Samsung has actually got more mileage from the idea than Motorola, seeming to have refined the basic premise. It can sit up on a flat surface for video calls or to take photos, and for some apps the bottom and top of the screen perform different functions (e.g. you can watch a YouTube video at the top of the screen while simultaneously writing erudite comments on the bottom of the screen).

Both devices look interesting and will catch attention from your friends – while the Razr cashes in on nostalgia, the Galaxy Z Flip has a somewhat more refined look.

Meanwhile, the Motorola Razr has a 16-megapixel main camera along with a Time-of-Flight sensor; its selfie camera has a 5-megapixel resolution.

While at first glance the Samsung device might have the edge due to slightly more versatility plus the brand’s prestigious track record, we haven’t had a chance to judge either of the camera systems yet so we’ll reserve judgement at this stage.

The Samsung Galaxy Z Flip’s main AMOLED screen measures 6.7-inches and has a 1080 x 2636 pixel resolution. Perhaps most significantly of all, it’s made out of Ultra Thin Glass rather than the plastic screen that most foldables are forced to rely on – so it should be more resilient and also feel more premium to the touch.

The Motorola Razr’s main display is considerably smaller at 6.2-inches, and there’s also a large notch at the top of the screen which houses speakers and a selfie camera. The screen is made of plastic, and the OLED display has a resolution of 876 x 2142 pixels.

Of course, given the trailblazing designs of these phones, there’s more than one screen to consider. 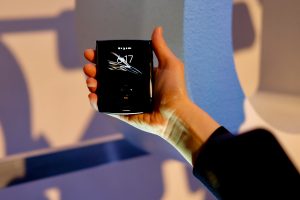 The Motorola Razr has a small outer screen that measures 2.7-inches, with a 600 x 800 pixel resolution. It functions similarly to the external screen that was on the Razr V3, and it gives you access to the time and notifications, some of which you can answer with canned responses. 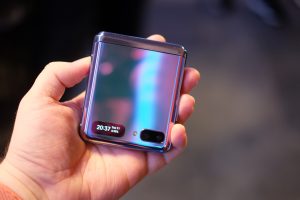 On the other hand, Samsung Galaxy Z Flip has a truly tiny outer display, almost negligible in size. You can read the time, and see notification symbols on it, but that’s more or less the extent of its abilities. The brand has claimed that you can take selfies using the outer screen.

Overall the Samsung Galaxy Z Flip’s main inner screen seems to be of superior size and quality, and after all this is the one you’ll be using most of the time; but the Razr’s external screen seems a little more user-friendly.

Samsung scores a clear win over Motorola in this category, with the latter being pretty disappointing according to the specs sheet.

The Samsung Galaxy Z Flip has a flagship tier processor, the Snapdragon 855 Plus, and while it’s not Qualcomm’s very latest any more, it’s still an impressive performer that can deal with very demanding tasks. This is paired with a very healthy 8GB of RAM and 256GB of storage.

On the other hand, the Motorola Razr underwhelms. It’s got a mid-range Snapdragon 710 chipset, 6GB of RAM, and 128GB of storage – a downgrade on every front compared to the Galaxy Z Flip, with the chipset being a particular disappointment. You could pay half the price for better performance and when you’re forking out top dollar for a prestige product like this, that’s a severe disappointment.

Neither of these phones could possibly be described as a bargain.

Given the fact that the specs advantage clearly leans towards the Samsung Galaxy Z Flip, it’s hard to justify paying that bit more for the Razr.

It looks like the Samsung Galaxy Z Flip is the winner on paper, based on its superior specs: it’s got a larger, more premium screen, a much more powerful processor – and it’s a bit cheaper too.

However we’ve yet to put the two devices through our full review yet, so stay tuned for our final verdict once we’ve put the two foldables through their paces.