Samsung’s Galaxy S10 series is finally official, with three new phones slated for a March launch and a 5G handset on track for summer 2019. We compare the base Samsung Galaxy S10e against the Galaxy S10 to see how the company’s new entry-level flagship stacks up against the brand’s latest flag bearer.

Side-by-side, you can see a passing resemblance to Samsung’s S7 series. While the standard S10’s form is accentuated by a curved glass front, the S10e opts for a simpler, flat-faced design, just as the Galaxy S7 Edge and S7 did respectively. The flat frontage highlights the bezel around the S10e’s 5.8-inch Full HD+ AMOLED screen, and as such it doesn’t look quite as premium as its larger sibling, whose display melts away into an almost imperceptible bezel along each side, following the direction of that curved cover glass. 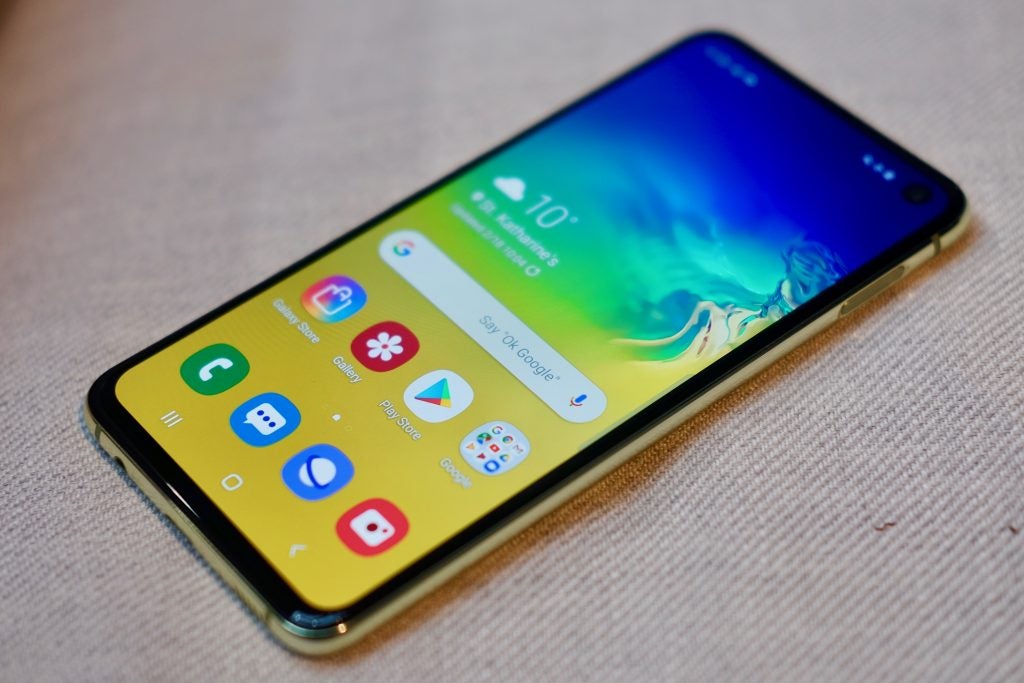 Samsung’s new “Infinity O” branding takes the form of hole-punch front-facing cameras, which sit in the top-right corner of each phone’s screen.

The displays on both S10s meet with a metal frame running the edge of their respective bodies. There are hardware controls on either side, including a Bixby digital assistant key on the left and, in the case of the S10e, a fingerprint sensor on the right. The standard S10 doesn’t offer any discernible sensor, as Samsung has implemented one of the first ultrasonic in-display sensors in a smartphone.

Promising to take a 3D scan of your fingerprint, it’s supposedly a more secure solution to the current optical offerings out there. Setup took longer than with the side-mounted sensor on the S10e, but in general use both methods seemed about as responsive as each other.

Samsung has seen sense to retain the headphone jack for yet another generation of flagships, with a standard 3.5mm port located to the side of a USB-C for power and data along each phone’s bottom edge. 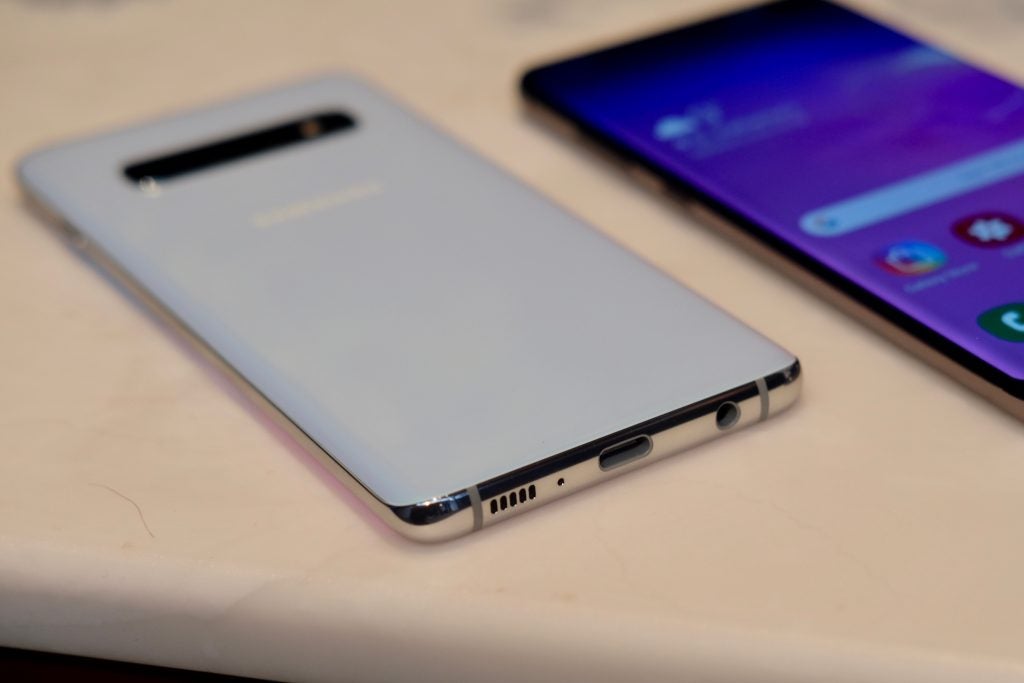 Speaking of power, the curved glass back on both devices facilitates wireless – and, in the style of the Huawei Mate 20 Pro – reverse wireless charging (dubbed “Wireless PowerShare”), implemented with the new wireless charging-capable Samsung Galaxy Buds in mind.

As with the rest of the S10 line and its predecessors, both handsets also pack in IP68 dust- and water-resistance. The S10 comes in four colours: green, white, black and blue. The S10e is also available in a striking Canary Yellow.

Inside, both phones are powered by Qualcomm’s Snapdragon 855 or an 8nm Exynos chip of Samsung’s own design – depending on the launch region. Even the base S10e packs in a respectable 6GB of RAM and 128GB of storage, with an 8GB RAM/256GB SKU also available. The standard S10, meanwhile, comes with 8GB of RAM in whichever variant you pick, leaving your decision-making solely down to storage – either 128GB or 512GB, depending on your needs (plus microSD support up to an additional 512GB is also on the table across all devices).

For gamers, Samsung says it’s added both Unity game engine optimisation and vapour chamber cooling, both of which should help improve performance – the former for specific titles, the latter in a more general sense.

Underpinned by Android 9.0, Samsung’s new One UI features on both devices, which should ensure easy one-handed navigation, even if you opt for the larger Galaxy S10. A new AI-powered performance protocol should also help reduce app launch times based on your usage.

The Galaxy S10 features an impressively robust four cameras. Three on the back consist of a 12-megapixel primary sensor with dual-pixel autofocus, OIS (optical image stabilisation) and an adjustable aperture that can switch between f/1.5 and f/2.4. There’s a 16-megapixel, f/2.2 aperture super-wide-angle, fixed-focus sensor; plus a 12-megapixel, 77-degree telephoto autofocus sensor with an f/2.4 aperture and OIS that grants it lossless zoom.

Meanwhile, the camera set within the Infinity O display on the front is a 10-megapixel sensor with a fixed f/1.9 aperture and, again, dual-pixel autofocus.

While 75% of the camera experiences available on the S10 can also be had on the more affordable S10e, this more humble handset doesn’t get to enjoy in the telephoto talents of the standard S10’s lossless zoom lens.

On top of their respective fingerprint-based unlock methods, both phones also support 2D face unlock by way of their front cameras.

Samsung is pricing the most conservative Galaxy S10e SKU at £669, while the 128GB S10 will cost £799. Both phones are available to pre-order from February 20 and are set to arrive on March 8.

The design, display and the photographic capabilities of the S10e don’t quite measure up to the more well-rounded Samsung Galaxy S10. However, in its own right, the S10e is still a powerful, capable phone that will no doubt leave most users impressed.

If any of the highlighted areas sound like pain points for you, then consider the more capable S10 instead.