Samsung and Apple share the biggest rivalry in the world of smartphones, and they’ll soon be going head to head with competing flagships: the newly announced Samsung Galaxy Note 10 and the heavily rumoured iPhone 11. Which will come out on top? Here’s a comparison based on all we know so far.

There are a couple of big differences setting apart the Galaxy Note series from the iPhone straight away. First and foremost, the former runs on Google’s Android operating system, while the latter runs on Apple’s iOS. The Note series is also distinctive for its S Pen stylus.

But both devices aim to set the standard by which all other smartphones are measured, in the familiar battlegrounds of camera, screen, and performance. Here’s how that contest is shaping up so far.

Both Samsung and Apple have respectable pedigree when it comes to camera quality. We described the iPhone XS‘ camera as “phenomenal”, while the Samsung Galaxy S10 also has a versatile camera capable of excellent shots. The Galaxy Note 10 has a triple camera, with the following specifications:

While the specs are impressive (albeit a modest step up from the Galaxy S10), we’ll only be able to judge the performance of the camera once it’s been through our full review.

We’re somewhat disappointed that Samsung hasn’t closed the gap with the trailblazing 5x optical zoom on the Huawei P30 Pro, but the iPhone 11 also looks set to miss out on that ability. 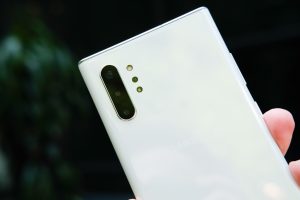 Thanks to multiple credible leaks, we strongly suspect that the iPhone 11 will also have three cameras. We expect a wide angle lens to be the third sensor, so it should at least have unprecedented versatility for an iPhone.

However, the polarising alleged design of the camera module itself — a chunky, rounded square — is likely to be less popular among consumers, as it eschews elegance for distinctiveness.

If you want to get the very best experience when watching videos or playing games on your mobile, then the quality of the screen is fundamentally important. Starting with Samsung, there’s a significant difference between the standard and the Plus versions of the Note 10 devices. 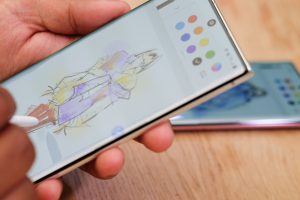 This controversial design is likely to split opinion, and could even look out of date compared to Android flagships that have mostly minimised intrusions into the screen. As with the Galaxy Note 10, the iPhone 11 is likely to be available in a standard and larger (‘Max’) size.

Apple, meanwhile, is reportedly developing a new A13 chip. Neither manufacturer is yet ready to introduce a 5nm chip to the market just yet, with that innovation likely to come in 2020.

We’re yet to put the Note 10 through its paces, but we expect nothing short of top-notch performance from the new handset.

It is, of course, far too early to give a definitive verdict in the contest between these two tech titans; we’ll deliver on that once we’ve put them both through our full review. While the specifications of the Galaxy Note 10 do look impressive, at this stage we would still expect the iPhone 11 to eclipse it in terms of sheer power, but the match-up is likely to be tighter when it comes to the screen and the cameras.