Samsung has officially announced the new Galaxy Buds Plus true wireless earphones, alongside the new Galaxy S20 smartphones during its Unpacked event.

The long-rumoured sequel to the original Galaxy Buds arrive amid the absence of a headphone jack for Samsung’s flagship range of smartphones, thus boosting their necessity in the eyes of some S20 fanciers.

While the design for the new-gen AirPods Pro rivals remains the same, there are a number of improvements under the hood, including significantly better battery life. Here’s everything we know about the upcoming Samsung Galaxy Buds Plus:

Galaxy Buds+ – What features do they have?

Samsung’s latest true wireless are a significant refinement of the first generation effort. Rumours had suggested this, and the official announcement confirms it.

The biggest improvement is the boost to battery life, with Samsung now pledging a whopping 11 hours of playback from the new buds (or 7.5 hours of talk time), with the charging case (270mAh) promising an additional 11 hours. That’s 22 hours in total. 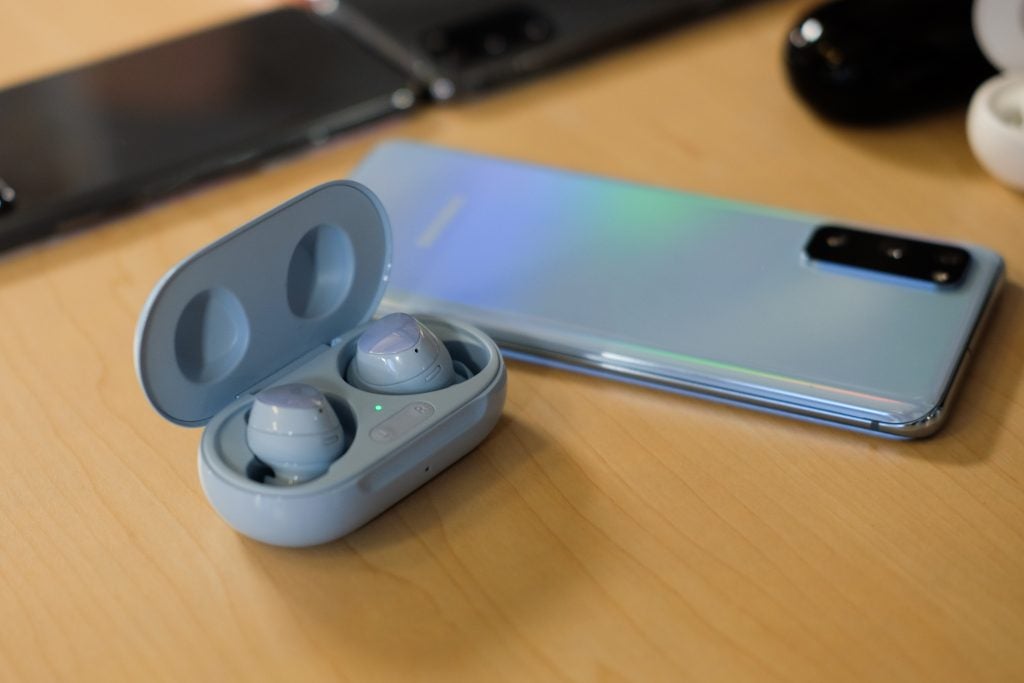 The Galaxy Buds Plus also benefit from Samsung’s wireless power share feature, meaning if you need more than 22 hours of battery life, for some reason, you’ll be able to jump start your listening device using your compatible smartphone. Fast charging is a little better than before, but delivers less juice as a result with three minutes on charge providing an hour of playback.

Active noise cancellation is not available, with this set of buds targeting the mid-range market rather than audiophiles. This may be a disappointment to some hoping for an AirPods Pro challenger in Samsung colours, but ANC tech is still a feature reserved for more expensive sets.

Samsung is also excited about an extra microphone sitting within the buds. That makes three in total, with the company touting the improvements to call quality. They’ll also offer dual dynamic drivers, meaning sound quality should be better than the first-generation model.

Bluetooth 5.0 has been expanded so the Buds Plus connect to multiple devices at the same time. Samsung says it’ll be easy to switch between phone, wearable, tablet, laptop, TV and more from a single app menu, rather than having to unpair and re-pair Bluetooth connections.

The touch pad offers integration with Spotify and Ambient Aware functionality returns too. In terms of Spotify, Samsung says one long press will begin playing recommended songs based upon the wearer’s listening history.

Galaxy Buds+ price – How much do they cost?

The original Galaxy Buds retailed for £139. The new earbuds haven’t added much in the way of features, but Samsung may be keeping the original on sale.

The Samsung Buds+ will sell for $149. Conversion is always spotty, so we’ll wait for the official confirmation before bringing you the price in sterling. You’ll be able to choose from a fetching sky blue, black and white once you decide to pull the trigger,

There’s also a number of tempting promotions on store for those pre-ordering the Galaxy S20 smartphone range. Basically, if you’re at the front of the line for an S20, you probably won’t be paying for these.

Last year the Galaxy Buds were announced alongside the S10 at Unpacked 2019 in February, followed by a March release. The Galaxy Buds Plus, meanwhile, will go on sale on February 14.