Looking for details on the latest Sony PS4 update? We’ve got all the news about upcoming PlayStation 4 software updates for 2017.

It’s believed that Sony is planning to introduce a new firmware update for the PS4 that will add brand new features – including improvements to Twitch streaming.

Eurogamer claims to have obtained a copy of the firmware update 5.0 release notes, which purportedly reveal that the new software will allow PS4 Pro owners to stream via Twitch at 1080p resolution and 60 frames per second.

Other rumoured changes include:

Unfortunately, it’s not clear when the actual release date will be. Eurogamer says Sony is planning to launch it “in the near future”, alongside a refreshed PlayStation App, but that’s all we know right now.

Sony has significantly upgraded the TV and video experience for PlayStation 4 owners in a new software update.

On the official PlayStation blog, Sony announced a new update that makes it easier to watch media content on your PS4. The company has rolled out a new design that puts all of your video and streaming services in one place, and will “help you find your favourites, and discover new and exciting content”.

The blog reads: “Instead of jumping in and out of all your different apps, find the best video on PS4 from one convenient spot.”

It continues: “Whatever your favourite video content – movies or TV, live sports or gaming clips – now you can easily find it on your PlayStation 4.” 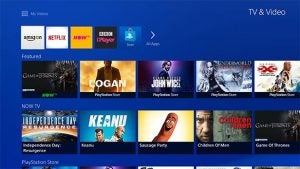 The refreshed UI puts all of the video and streaming content into a single folder called TV & Video. There’s now a top row of small icons where you’ll find your apps, but the majority of the page is populated by specific content.

The new refresh will be available in the USA, as well as the following other countries: Australia, Austria, Denmark, Finland, France, Germany, Italy, Norway, Spain, and Sweden.

What else would you like Sony to change about the PlayStation UI? Let us know in the comments.