OLED vs QLED: What’s the difference? We delve into the particularities of these two leading TV technologies.

Televisions have never been better, or more exciting, than they are today. This is partly because manufacturers have gone into competitive hyperdrive with new features such as 4K Ultra HD and HDR (high dynamic range). But it’s also because we’re seeing a no-holds-barred scrap – driven by the intense rivalry between Samsung and LG – between two different television screen technologies.

Both make their pictures in very different ways, and both come with quite distinct advantages and disadvantages. We’ll explain those differences here.

OLED vs QLED – How OLED works

OLED screens enable every pixel they contain to produce its own light. The clue to how they achieve this is in the technology’s full name: Organic Light Emitting Diode.

Since each OLED pixel needs its own electric current to work, you end up with a situation where every single pixel can work pretty much independently of even its nearest neighbours. This sort of pixel-level lighting precision has made the technology a firm favourite of home cinema fans over recent years. 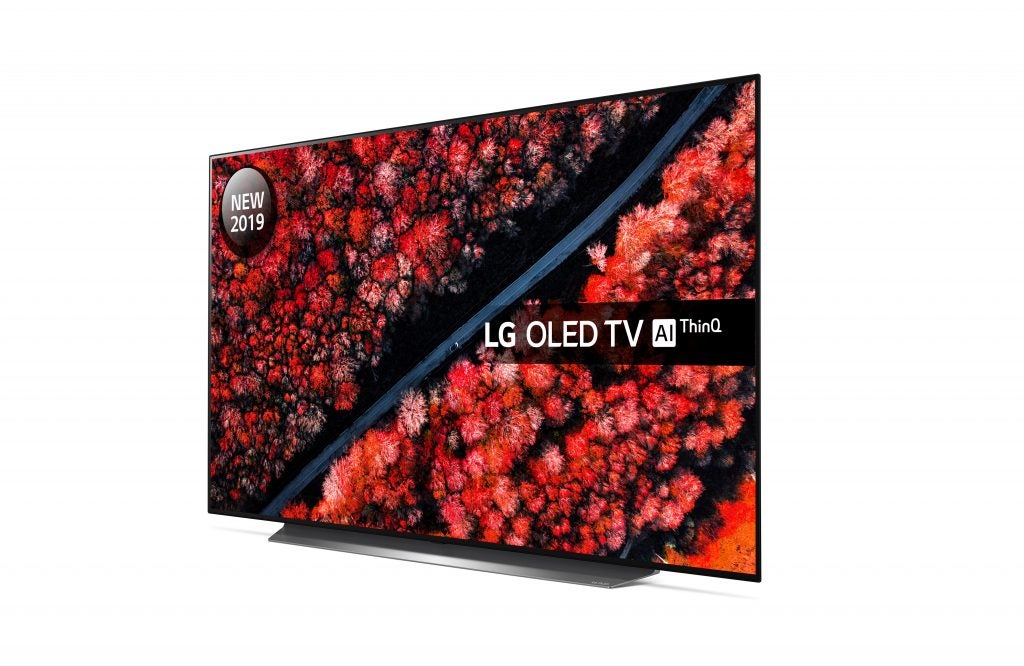 OLED vs QLED – How QLED works

QLED is basically a fancy take on LCD TVs. The term itself recently underwent a significant change in meaning.

Prior to CES 2017, QLED was in reference to future ‘self-emissive’ LED technology, where every pixel in an LED display makes its own light in a similar manner to OLED screens. But then Samsung essentially − and rather controversially − rebranded QLED. Now, it refers to any TV that combines traditional LCD technology with Quantum Dots.

Quantum Dots are an alternative to the filters LCD TVs usually employ to make colour. They use an array of tiny dots of slightly different sizes that produce different wavelengths (and therefore colours) when light is applied to them.

Since each tiny ‘dot’ is focused on just one colour, Quantum Dots can produce bolder, but also more precise colours than you’d get from traditional filters. They can also make more efficient use of any light that hits them than a typical filter, yielding potential energy consumption advantages. 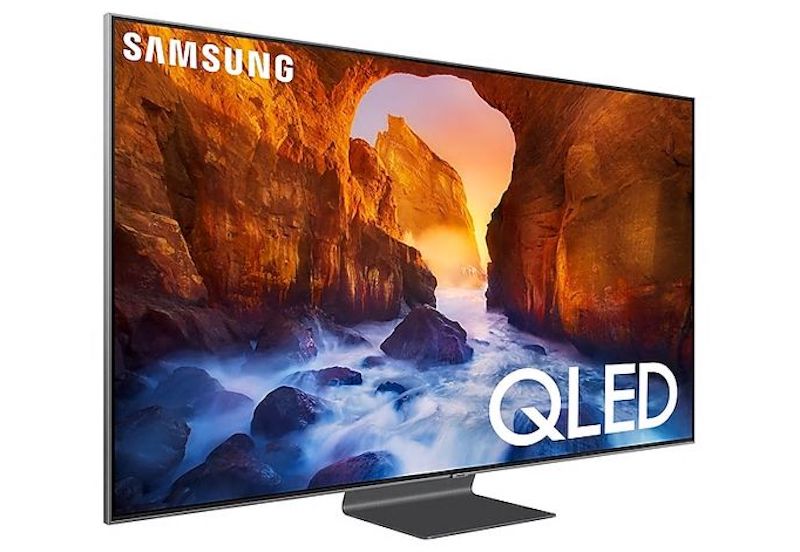 Since every pixel in an OLED TV can make its own light, it’s possible to have a perfectly black pixel sitting right alongside a maximum-brightness white pixel.

It doesn’t take a leap of imagination to see that this individual pixel-level light control has the potential to deliver much more contrast and image light uniformity than any current LED solution on the market.

This really comes into its own with today’s HDR sources, as it means HDR’s brighter image highlights can be delivered without compromising any dark areas around them. There’s none of the general greying over of dark elements, or distracting light blooming or striping around bright elements, you get with LED TVs (depending on the type of backlighting they use).

Being able to put deep black and bright white pixels beside each other without any compromise has a stunning effect on a picture’s contrast. Torches flickering in a dark window, the moon in a night sky, stars in space, spotlights in dark buildings – all such picture elements enjoy a level of intensity on OLED screens that you just aren’t matched by the picture performance on any other current screen technology.

So pronounced can the difference in brightness be between the darkest and brightest parts of an OLED screen’s images, in fact, that very extreme contrast content can actually momentarily make OLED appear brighter than QLED.

Being able to control the light level of every pixel potentially enables OLED TVs to reveal subtle shades and details in the darkest corners of pictures that can get ‘crushed’ out of QLED pictures.

This doesn’t always work out as you’d expect. Certainly many OLED TVs need quite carefully setting up to avoid crushing subtle detailing themselves. But the principle is sound, and borne out in our head-to-head comparisons of real-world TVs later.

Since OLED TVs use self-emissive pixels, their pictures can be viewed from a much wider angle than those of QLED TVs before they start losing any significant colour and contrast. This is clearly a big deal if your viewing room requires anyone to sit off down near the sides of the screen.

5) Unlocks the dark end of what HDR can do

While some refer to the introduction of HDR as creating a brightness race where TVs are concerned, the reality is HDR is as much about the dark end of the light spectrum as the bright end.

So while QLED can certainly put on a light show with HDR’s bright stuff, OLED is better equipped to unlock all that extended dark scene detail HDR can carry.

For decades, brightness wasn’t really a big deal in the TV world. The old ‘Rec. 709’ video standard just didn’t put much store in it. The arrival of HDR video, though, has suddenly put brightness on the TV map.

QLED TVs are far brighter than current OLED TVs. For instance, the 65-inch Samsung Q90 can pump out a peak measured light output (on a white HDR window filling 10% of the screen) of 2050 nits.

Last year’s Hisense 75U9A Quantum Dot TV, meanwhile, managed to punch in at 2700 nits with the same test signal. OLED TVs, by comparison, have yet to push past the 1000 nit barrier.

Colour volume is the name given to measurements of colour at varying levels of brightness. So it kind of goes without saying that since QLED TVs can hit much higher brightness levels than OLED ones, they’re able to deliver measurably more of the sorts of colour volumes we see in the real world.

HDR video is currently defined as being capable of hitting peak brightness outputs of 10,000 nits. Most HDR content to date is mastered to peaks of 1000-4000 nits (or less). But this still provides plenty of breathing room for the brightness of QLED TVs to deliver much more of the sort of impact – at least during bright scenes – that HDR is designed to reproduce.

As well as delivering a bigger picture quality ‘jump’ from standard dynamic range to HDR during bright scenes, this extra brightness means that QLED screens can make HDR pictures look more lifelike. After all, one of the points of HDR is to enable screens to reproduce more of the light levels our eyes witness every day.

Since QLED TVs don’t use organic elements, they are essentially immune to screen burn/image retention, whereby prolonged exposure to a particularly bright static image element – a channel logo, say, or part of a game HUD – can eventually leave a permanent shadow of that image element behind.

OLED TVs have improved greatly in this respect in recent years, and you can mitigate the risks of screen burn by taking care how you use an OLED screen – especially in the first 100 hours of its life. But this still isn’t as good as being immune to the issue like QLED screens are.

OLED TVs are notoriously difficult to make, meaning that panel yields were, until recently, low. This has tended to result in prices that have remained stubbornly high. QLED technology, by comparison, can be relatively straightforward to manufacture, costing only a small premium over standard LED TVs.

It should be stressed, though, that chief OLED manufacturer LG has made great strides with OLED production efficiencies – and OLED prices have started to fall as a result. Also, advanced QLED approaches, such as the metal-clad Quantum Dots in Samsung’s QLED TVs, can actually be quite expensive to produce. 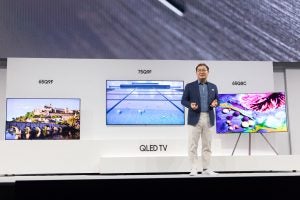 We saw some stunning efforts in 2018. LG, Panasonic, Philips and Sony all delivered impressive OLED TVs and Samsung’s QLEDs made a significant impact too.

We’re in the early phase of 2019 TVs rolling out and so far we have seen Samsung’s 65−inch Q90 and LG’s OLED55C9 4K TV. Now while they’re not exact comparisons − the Q90 is Samsung’s top-of-the-line effort and the C9 resides in the middle of LG’s OLED lineup − we can get a measure of where both manufacturers are.

Samsung’s Q90 is proving to be a significant moment for QLED TVs. It has, in some regards, brought the gap between QLED and OLED TVs even closer. Contrast is much improved over last year’s models, with blacks approaching the confidence exhibited by OLED panels. The Ultra wide viewing angle technology that Samsung introduced has allowed for viewers to watch content from almost any angle without seeing much of a reduction in colours or contrast. It’s also far brighter than any OLED TV can manage, another feather in its cap.

With the C9 LG has pursued evolution over revolution. Many of the issues experienced with the 2018 TVs have been reduced or outright eliminated. As an all-round effort the C9 produces an excellent performance, with a comprehensive smart platform, superb black performance and contrast, as well as audio performance that’s better than you’d expect from a flatscreen TV.

It’s already looking like another good year for both TV technologies and we still have yet to see OLED efforts from Panasonic, Philips and Sony yet. The competition is likely to heat up as we approach the summer months.

OLED VS QLED – Which is better?

Trying to simply pick OLED over QLED or vice versa is a fool’s errand. The bottom line is that they both excel in different ways. And so they both suit different types of viewing conditions and picture preferences.

If you’re looking for a TV for a bright room, or something to give you the most consistent dynamism from HDR content, the top-end, direct-lit QLED TVs are the way to go. They’re brighter, deliver more ‘real-world’ colour volume, handle ambient light better and are immune to screen burn issues.

For darker conditions, though – at least for the sort of AV fans who value black-level depth and dark detailing over brightness – LG’s OLED TVs are the way to go. That is particularly the case if your room layout routinely requires someone to have to watch the TV from much of an angle.

Either way, my biggest takeaway from putting this article together is that anyone buying a TV in 2019 should feel very happy indeed to have such choices.