The official MotoGP game finds itself on the frontier of an eSports revolution, but how do you get a niche sports game to the big time?

The premier motorcycle racing championship, MotoGP, has started its own eSports competition. It follows the World Touring Car Championship and, most notably Formula One as a real-life world championship attempting to capture a digital generation.

Problem is, who is this digital generation? And do they want gaming or sports? Nobody seems to know yet. “It’s an experiment,” explains Michele Caletti, lead developer at Milestone, the developers of the MotoGP game series.

The MotoGP eSport final was held in Valencia alongside the real-world MotoGP finale, broadcast live on the official MotoGP YouTube channel to around 50,000 people. The production, while not without minor teething troubles, was a slick affair, and was presented by real-world, on-screen talent and a professional commentary team. The racing itself was utterly engrossing, which was the biggest mark of success for the event and shows that there is potential for a huge-scale, gladiatorial-style MotoGP eSports event in the future.

Prizes of a £40,000 BMW M3 and KTM road bike weren’t to be sniffed at. It was a very safe and corporate-friendly affair, in line with a first foray into a digital-only event for a general audience.

Broadcast motorsport leagues have been around for longer than eSport has been a marketing term, but none of the series have ever really had an impact in terms of viewership or prize money. MotoGP can look to Overwatch, DOTA, CounterStrike and Rocket League for examples of big-money leagues done right, but for all of these games, the majority of the audience are themselves players of those games. How do you conquer non-gamers?

“We are on the frontier, because we are one of the few that have tried to implement something that’s really TV-style,” Caletti explains. “It’s not a game, it’s a TV show you have to create. It has to be great for those who play but it also has to be wholesome for those who watch it.

“Digital sports translated into eSports has to be understandable and nice to watch. And we’ve taken some very good steps in that direction. In other racing sports, it’s been missing up til now, and I think it’s the future.” 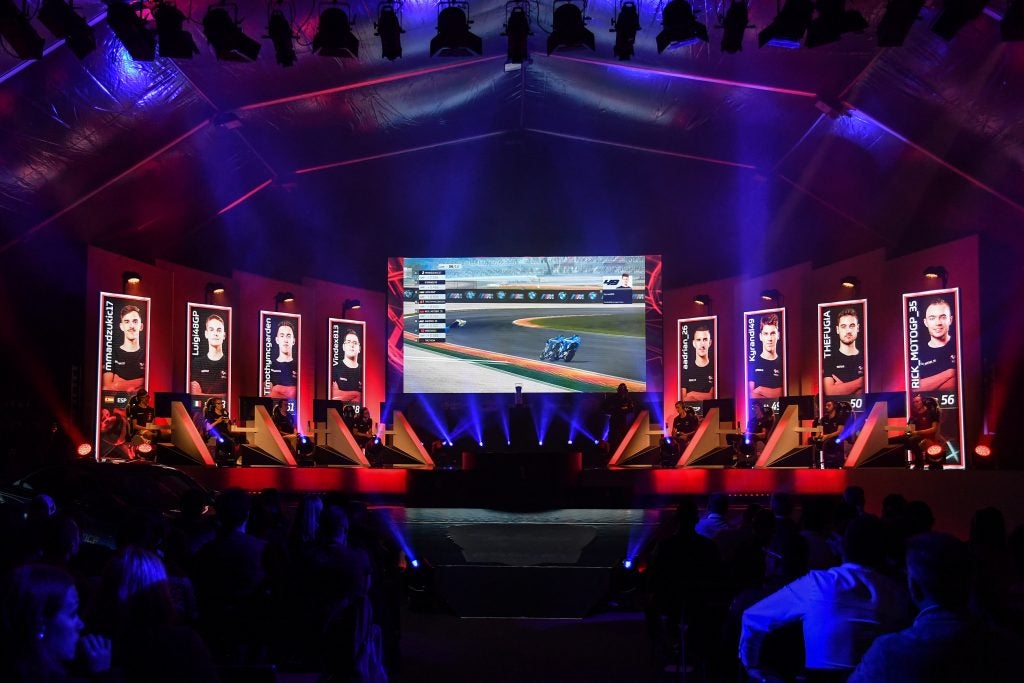 The finalists were selected using online time trials that took place over several weeks. The fastest two or three gamers from each trial were then invited to take part in the televised final, with two semi-final races and an eight-player final for the big prize.

But behind the scenes at Milestone, getting the MotoGP ‘17 PS4 game ready for a waiting audience and an unforgiving line-up of 16 fast-fingered finalists, it was anything but an easy ride.

“It’s a different game,” explains Caletti. Not only did the company have to make the game fair to the virtual riders, it also had to create special versions of the game for the TV-style broadcast.

“Working closely with [MotoGP promoter] Dorna, we wanted something that was ideal for their TV-style direction. So we created some special spectator versions of the game that they can work just like the cameras work in reality. Behind the stage, there’s one of the trucks they use for the real TV coverage.

“We also implemented warnings for the players, so the real race director of MotoGP is back there in the truck watching what the players do, and giving them warnings and even black flags [disqualifications].

Not only that, but in order to make the field appear diverse, Milestone had to alter the game’s physics engine so, despite the bikes looking different, they all behave identically to keep the competition fair. No mean feat, and it took months of work after the retail version of the game launched earlier this year.

The challenge for MotoGP ‘17, which Caletti admits, is that it doesn’t have a big online community. Indeed, Caletti describes it as an “underworld”, which nobody outside of the core community has any awareness of.

But with backing from Dorna and a big pre-existing real-life audience, MotoGP eSports has a shot at the big time.

Share your thoughts on the eSports revolution by tweeting us @TrustedReviews.