Google may be planning to add Apple-iMessage style emojis to its RCS messenger service in the very near future.

In a Reddit thread first spotted by Android Police, two users report seeing the new reactions on their Android devices – which look a lot like the iMessage emojis on Apple gadgets.

Both users are on the beta version of the Messages app, but they’re packing very different models – one is using a OnePlus 7 and the other has a Pixel 3. According to the users, there are at least seven different emoji reactions available, which are accessible when you do a long click on a received message. 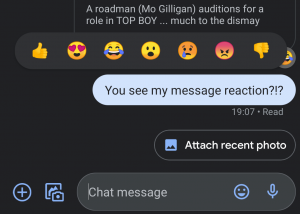 Current reports indicate that only a very small number of people have been able to access the new feature, so it looks like the reactions have a limited server-side roll-out, suggesting that Google is conducting a small-scale test for now.

But past rumours indicate that we may well see a wider roll-out at some point in the future.

Back in March, some nosey types at 9to5Android did a teardown on the Messages app, where they first discovered a string of code that suggested that emoji reactions were incoming. The string related to “fallback” messages, which are the descriptive texts you receive when your phone can’t decipher an emoji or symbol. Although this isn’t an outright confirmation of the feature, it indicates that Google has been mulling it over for a while.

Google first started rolling out RCS messaging last year, in an attempt to bring its service up to speed with the likes of WhatsApp and iMessage. It had previously relied on the old SMS standard, but switched to Rich Communication Services so that users could enjoy things like read receipts and better quality images.

Emoji reactions might seem like a small addition to your blower, but it gives you an easy reply option when you can’t be bothered to draft that witty response.