When is Floyd Mayweather vs Conor McGregor? Everything you need to know about 2017’s biggest boxing fight

Mayweather vs McGregor Time of Fight, Date and TV Channel UK: Our guide reveals everything you need to know about the year’s biggest boxing showdown and one of the most anticipated events in combat sports history.

Now it’s finally time for the two larger-than-life personalities to enter the ring, here’s what you really need to know about the historic fight.

Mayweather vs McGregor Date: When is the McGregor vs Mayweather fight and how can I get tickets?

Mayweather vs McGregor is set to take place at the T-Mobile Arena on the Las Vegas Strip on Saturday August 26, 2017.

Big-ticket boxing fights are usually a late night affair, especially here in the UK. A sizeable undercard is likely to precede undefeated Floyd Mayweather and Irish MMA fighter Conor McGregor entering the ring, so boxing enthusiasts in Britain, Ireland, and Europe should plan to stay up well into the wee hours of Sunday August 27.

Alternatively, if you’re feeling flush, own a supersonic jet, and fancy heading out to the Strip to catch the action live, there were still some (not cheap) tickets available via Ticketmaster US at time of publication as demand hasn’t been quite as strong as predicted.

Buy Now: Mayweather vs McGregor tickets from Ticketmaster US 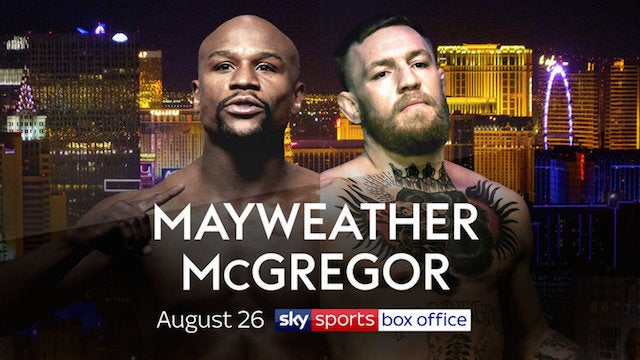 Ticketing information reveals that the Mayweather vs McGregor event is scheduled to start at 3pm local time – though that’s yet to be confirmed by broadcasters. Las Vegas is in America’s Pacific Time Zone, so it’s eight hours behind the UK during the summer, meaning things should kick-off around 11pm BST.

Factor in a few hours of undercard bouts and the big fight isn’t likely to start in the UK and Europe until the early hours of Sunday, August 27 – 1-2am UK time would probably be the earliest, though some pundits are saying it might be as late/early as 4am here.

Our independent investigations reveal that most Mayweather vs McGregor related events are anticipating a 3am BST start time for the main bout, but as ever, tune in early to ensure you don’t miss a second of the action.

Mayweather vs McGregor TV Channel UK: How do I watch McGregor vs Mayweather on TV and what’s the price?

Sky recently confirmed that it would be airing the Mayweather vs McGregor fight in the UK on its pay-per-view Sky Box Office service, having beat BT to the rights for the £500 million event.

It also announced – much to the surprise of some fans, who were expecting it to cost far more – that the fight will be available to watch for just £19.95. To put that into perspective, Showtime PPV in the States will be charging up to $100 (~£75) for the fight. It’ll be available in Ireland for the similarly affordable price of €24.95.

Not sure how to access Sky Box Office without an expensive subscription? Bag a great value Now TV Box from just £14.99 and you’ll be tuning into the fight in no time.

Better still, Sky Box Office has now opened up pre-orders for the fight – book via the link below.

That’s all we know right now, but stay tuned, as we’ll be regularly updating this page with all the latest Mayweather vs McGregor details as they become available.

Let us know your prediction for the fight by tweeting us @trustedreviews.