Apple unveiled the Mac Pro 2019 at last year’s WWDC event. The update to Apple’s professional desktop computer includes a powerful performance boost and a strange new design. Here’s everything you need to know about the Apple Mac Pro 2019, including its price, release date and specs.

Apple showed off the Mac Pro at WWDC 2019, calling it the ‘most powerful’ and ‘most configurable’ desktop computer it’s ever created. Not only that, but the Mac Pro has also been given a design makeover, abandoning the compact circular frame in favour of a style that wouldn’t look out of place in your kitchen.

There is solid reasoning behind the new cheese grater-esque look. The odd design has been used to improve thermal performance and prevent those ultra-powered components from getting too toasty.

Also boasting the capability to use multiple GPUs simultaneously, Apple claims the Mac Pro effectively has the “world’s most powerful graphics card”. There’s no question, this thing is an absolute monster machine. 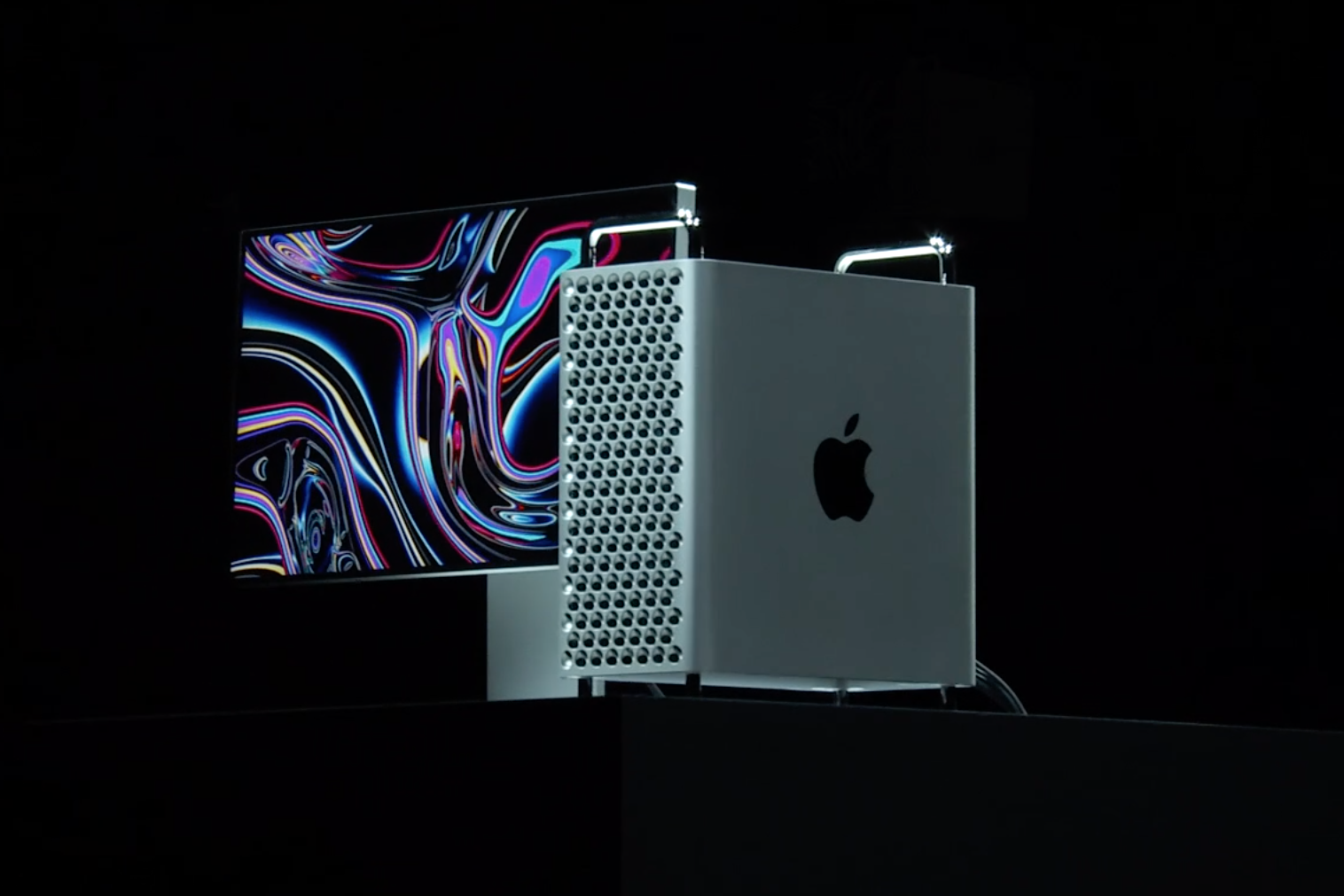 The Mac Pro 2019 hit shelves on December 10, in time for Christmas (just in case any of your friends were feeling particularly generous this year). This was a little later than Apple’s planned autumn release date.

The base model of the Apple Mac Pro 2019 will set you back £5,499, with the most expensive configuration landing at an eye-watering £53k (and that doesn’t even include the monitor…).

The base model sounds impressive enough with an octa-core Intel Xeon processor, 32GB of RAM, a Radeon Pro 580X graphics card and a 256GB SSD.

While the Mac Pro’s incredibly powerful specs no doubt merit the super steep price, the base model is still an undeniably huge investment, especially when you consider the 6-Core Mac Pro 2013 costs just £2999 in comparison.

The Apple Mac Pro 2019 is incredibly powerful. It offers up to a 28-cores Intel Xeon processor, which is far, far more powerful than what even the most demanding professional creatives need. The 64 PCI Express lanes, meanwhile, optimises performance and dishes out stonking bandwidth.

Even more shocking is the capability to use up to 1.5TB system memory, with six-channel memory across 12 DIMM slots. The eight PCI Express slots also allow you to fit more expansion cards.

The Mac Pro 2019 provides over 300W of power to keep all of these components running at peak performance. 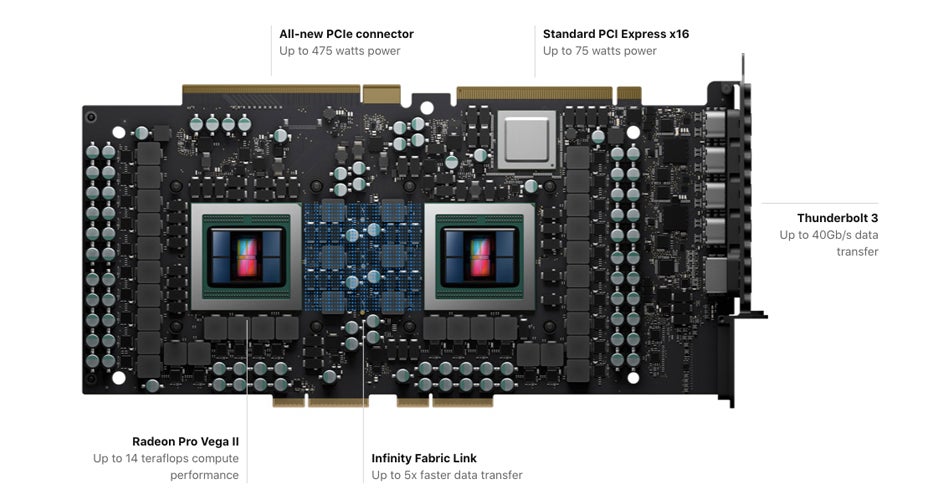 Why use one graphics card when you can have two running at once? The Apple MPX Module allows you to fit two of AMD’s Radeon Pro Vega 2 graphics cards at once for a staggering amount of GPU grunt. This module features 500W of power and Thunderbolt integration, which are reportedly both firsts for a graphics card.

If you’re thirsty for even more power, the Mac Pro 2019 allows you to integrate two Radeon Pro Vega 2 Duo instead, which means the Mac Pro 2019 is using four GPUs at once. Apple claims this equates to the “world’s most powerful graphics card” offering up to 56 teraflops of graphics performance.

As of July 2020, the Mac Pro can also be configured with the Radeon Pro W5550X with 8GB of GDDR6 memory. The latest GPU addition, which was spotted by MacRumors, allows buyers to go a step up from the entry-level Radeon Pro 580X for £200, instead of dropping £600 on the W5700X introduced in April. The W5550X supports up to 5.6 teraflops of single-precision performance or 11.2 of high-precision computing.

Of course, to maintain such a high performance, the Mac Pro 2019 is going to demand a hell of a lot of power, so Apple is bundling a power supply that maxes out at a jaw-dropping 1.4kW. Three massive fans are at hand to cool down this super-powered machine, while Apple claims they won’t make too much noise.

Mac Pro 2019 Design – Why does the Mac Pro look like a cheese grater?

The Mac Pro 2019 could be considered the ugly child of the Apple family, as it turns its back on the sleek cylinder frame in favour of practicality.

Let’s be honest, the Mac Pro 2019 looks like a massive cheese grater, as air vents litter the front of the desktop computer. Apple’s Tim Cook says this design choice was made to maximize airflow, which makes sense considering the sheer power of the components inside. 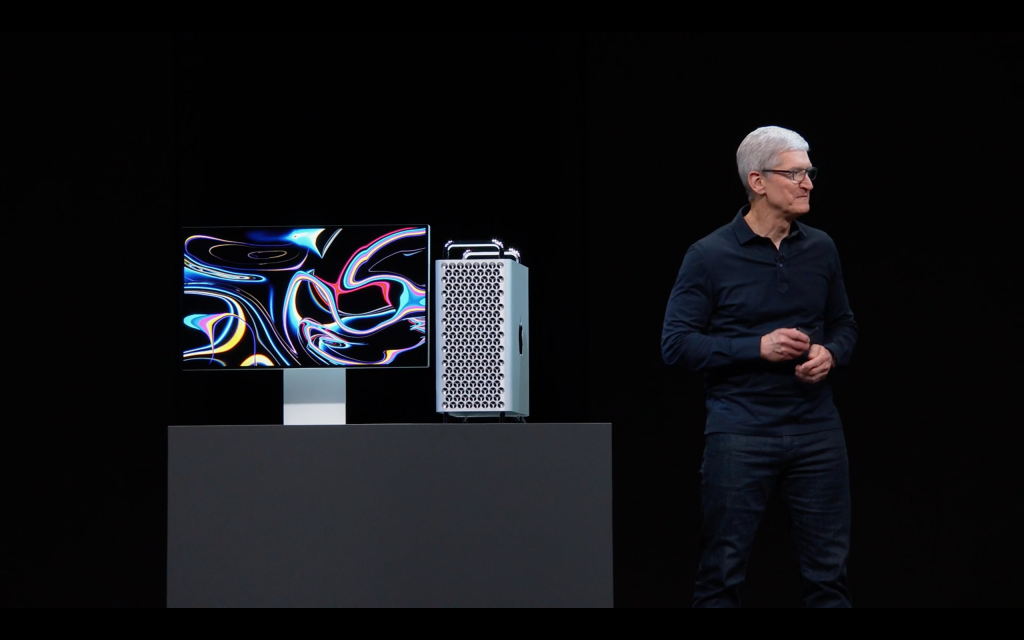 Apple has made it easy to access the internals, with the Stainless steel frame allowing 360-degree access. Twist and pull a white handle on top of the computer, and the computer’s casing will lift off leaving all the internals bare so you can easily pull out and plug in components

This is major contrast to the Apple Mac Pro 2013, as fans criticized its compact design as being awkward to get inside and replace internals.

Rather strangely, Apple has also implemented stainless steel handles on the top of the device, to make it easier to transport. This arguably makes it looks like a Terminator’s lunch box though.

If the design wasn’t already bonkers enough, Apple also confirmed you can install optional wheels at the bottom. We make fun of it now, but given the inevitable heft of the system, our stringy biceps will no doubt be worshipping this design choice in the future.

The Mac Pro 2019 admittedly doesn’t have a huge offering of ports, but it does feature two Thunderbolt 3 ports, two USB-A slots and a 3.5mm headphone jack.

Apple also unveiled the Pro Display XDR 6K Retina monitor, which they called “the world’s best pro display” and should pair up nicely with the Mac Pro 2019. But with the monitor costing at least $4,999, it’s going to be a very expensive ensemble.