Android tablets may not be the most chic offering these days, but LG hasn’t given up on the format just yet.

LG has announced a brand new Android slate – the LG G Pad III 10.1 FHD LTE. As the name suggests, you’re getting a 10.1-inch screen with a display resolution of 1,920 x 1,200 pixels. It’s also got support for 4G/LTE networking, although you can just stick with a standard Wi-Fi connection if you don’t want to cough up for an expensive SIM.

What’s reasonably unique about the LG G Pad is that it comes with a kickstand that can rotate as far as 70 degrees, which makes it easy to prop it up on a table for watching videos. It’s a design already adopted by Lenovo’s Yoga Book, but it’s definitely something more manufacturers should consider doing. 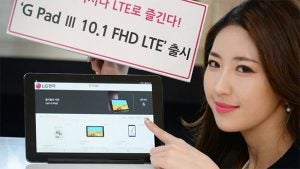 The tablet runs on a 1.5GHz octa-core CPU, and comes with 2GB of RAM and 32GB of storage, which plants it firmly in the mid-range category. You’ll get last year’s Android 6.0.1 Marshmallow operating system, plus support for 802.11 a/b/g/n/ac Wi-Fi.

Other perks include Bluetooth 4.2, GPS, a USB Type-C port, and two 5-megapixel cameras – one on the front, one on the back. There’s also a fairly sizeable 6,000mAh battery keeping the device powered up, although it’s not clear what sort of battery life you should expect from the tablet just yet. We’d say battery life should be decent enough however, given the fairly reserved pixel density of the display and the low-power CPU.

The other major unknown is release date. LG hasn’t confirmed when it plans to launch the tablet, but there are a few prime opportunities. The next obvious launchpad for the G Pad would be CES 2017, a Las Vegas technology tradeshow that takes place every January. With CES just around the corner, we’d be very surprised if LG didn’t have its new tablet on show. Alternatively, LG could announce retail shipping for the device at MWC 2017, the February-held Barcelona tech tradeshow, which has a bigger focus on mobile tech compared to the more generic CES. 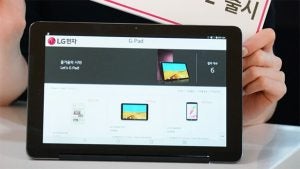 Android tablets have fallen out of fashion lately, with consumers lured away by increasingly large smartphones. According to analysts at IDC, growth in the worldwide tablet market declined by 12.3% year over year. But Jitesh Ubrani, a senior analyst at IDC, said there’s still hope for the industry:

“At present, it’s difficult for Android to compete with iOS or Windows detachable products. However, the next 12 to 18 months will be very interesting as Google launches the next version of Android with better multi-tasking support and as they begin to bring together their two operating systems.”

What do you think of tablets? Still use them? Ever used them? If not, why not? Let us know in the comments.