Hidden iOS 7 features have been discovered by a developer within the beta preview currently available.

In addition to the new iOS 7 features demoed during WWDC last week, Apple has also been testing other new enhancements for its mobile OS, discovered by developer Hamza Sood.

Within a hidden settings panel within the iOS 7 beta, which is only discoverable through a series of unspecified tweaks to the preview, it has been revealed that Apple is working on a number of additional gesture, multitasking and folder options for iOS 7.

The settings also reveal that users would be able to hide pre-installed apps that aren’t required by the user.

iOS 7 users will also be able to create sub-folders within collected app windows and can pinch to close those folders too.

Further hidden settings seem to offer enhanced customisation features like blurring effects, colouring and animation speeds. These may well never been in the full public version of iOS 7 due to launch in the autumn, but it is interesting to see what aspects Apple has been tweaking on the “the most significant iOS update since the original iPhone.”

Arriving on existing iOS devices later this year, sometime in the autumn, iOS 7 introduces greatly enhanced multitasking features to bring it into line with Android and will revolve around a new Control Centre hub.

Next, read what’s new in our iOS 7 features list. 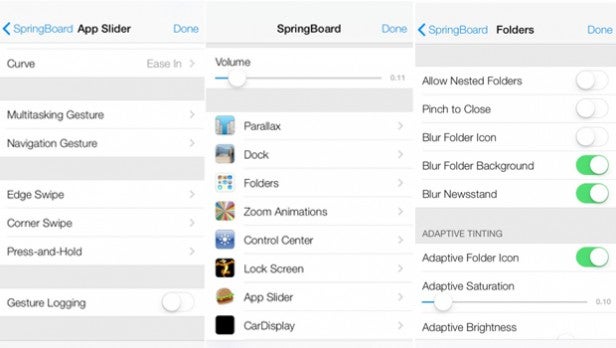