While Apple’s September 12 ‘Gather Round’ event came and went without so much as a nod to Apple’s top tablets, the release of the iOS 12.1 beta has dropped some clues as to what the next iPad Pro is bringing to the table – namely the first instance of landscape Face ID support.

Hacker and developer, Steve Troughton-Smith was one of the first sources to discover that Touch ID and the home button might be left out of the equation on the next iPad Pro. A little more digging and he also unearthed AvatarKit – the underpinnings of Apple’s Animoji feature, retooled specifically for iPad. Now, with the arrival of the iOS 12.1 beta, Steve has posted a series of new tweets outlining landscape support for Face ID and the likelihood of a new TrueDepth sensor to facilitate the feature.

Renders of the next iPad Pro, rumoured to arrive soon, showcase a new design that does away with the home button and instils a thinner bezel all the way around the tablet’s display. As it stands, this bezel may be deep enough to include a TrueDepth sensor, similar to the one found on the iPhone X and new iPhone XS, iPhone XS Max and iPhone XR. However, with the adjustment of the iPad’s status bar clock placement in iOS 12, some expect that the next iPad might indeed share in the latest iPhone’s notched display.

If this is the case and Apple’s next iPad Pro does indeed forgo Touch ID in favour of Face ID, the company wouldn’t be able to simply transplant the same TrueDepth sensor as it’s configured for its iPhones, explicitly because people use and unlock their iPads in landscape as well as portrait orientation far more readily than they do their phones.

In another tweet responding to a fellow user on the viability of landscape Face ID use:

In order to allow Face ID to be usable in both portrait and landscape orientation, it sounds as though Apple will have to adjust the way the lenses and sensors in the current TrueDepth sensor are currently arranged. There has been talk of Apple only allowing unlocking using Face ID in a single orientation, which would no doubt give the engineering team an easier time of it but would likely frustrate users who’d have to rotate their iPad Pros every time they wanted to unlock their slates with specific tasks in mind, like watching a movie. 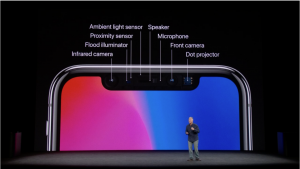 Samsung’s latest premium slate, the Galaxy Tab S4 facilitates its own iris-based face unlocking technology in both orientations but its reliability when using the tablet in landscape is far more questionable.

Should Apple announce a special event for October and should an iPad Pro turn out to be on the cards, we might finally gets our hands on a Face ID-capable tablet but those are a lot of hypotheticals based solely on a few tweets and a development build of iOS that’s subject to radical change before it hits prime time.

What do you think? Will Apple drop a new iPad Pro in 2018 and will it support landscape Face ID? Leave your thoughts with us on Twitter by mentioning @TrustedReviews.