Intel has shown off its Project Alloy prototype at CES 2017, but what exactly is the ‘merged reality’ it claims to offer? Read on to find out.

The dream is real. Tether-free VR is here and Intel is behind it. With Project Alloy, Intel is hoping that some day in the near future, we can ditch cables and start enjoying VR on a huge scale. But is it going to be any good?

Well, Intel has now shown off a prototype at CES 2017, and we’ve got a much better idea of how the technology is going to work. What’s more, we learned that a version of a Project Alloy headset could go into production before the end of 2017.

Before we get into how it all works, here’s a bizarre video which is about as far away from the realities of Project Alloy as you can get. That said, here’s how Intel introduced Project Alloy: 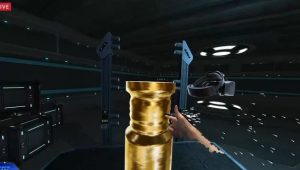 At Intel’s Developer Forum event last year, we saw a bit more of what the headset is capable of. You can see your real hands inside the VR headset, and all five fingers on each hand are tracked and can be used to interact with virtual objects. No gloves, no controllers.

Not only that, any object in your hand can be used in the virtual world. In the demonstration, a dollar bill was used to sculpt a piece of gold.

No external sensors are required at all: all that’s needed is the headset and its built-in RealSense cameras. RealSense is the 3D camera tech Intel has been pushing for a couple of years and it’s already useful for facial recognition, and now it’s had a huge boost with VR hardware. 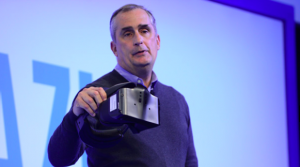 However, during the CES demonstration, Intel demonstrated how the headset could create a virtual version of a living room which had been ‘pre-scanned’. In the demo, the pre-scanned room was recreated digitally, and the various objects and items of furniture were turned into similar-sized scenery from a spaceship. Despite the ‘pre-scanned’ caveat, the demo was the most advanced we’ve seen since the project was announced in August.

Intel has also partnered with Microsoft to bring its Windows Holographic software to Project Alloy. In the second half of 2017, Intel will make the specification of Alloy open source, opening up the hardware to developers. The headset itself will not be manufactured by Intel. Rather, the company will offer the technology to other firms which will then develop Alloy-based products.

And while Intel CEO Brian Krzanich announced that Project Alloy will hit production by the end of 2017, some have cast doubt over the claim, pointing to possible conflicts of interest with outside manufacturers keen to push their own systems. 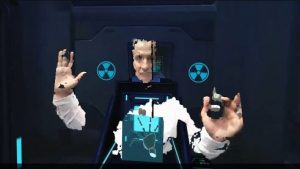 If you get too close to a real-world object, such as a CEO of a major company, they’ll appear inside your virtual world

During the CES demonstration, Intel also showed how Alloy could be used for other purposes outside of scanning immediate environments. The demo included high definition 360-degree video captured at a waterfall in Vietnam.

Actual specification details are thin on the ground, however it’s not surprising that Intel has been able to cram a VR experience into a headset. Its tiny NUC-branded PCs are about the same size as the front of the headset, and the Intel Core i7-6820HK processor found inside the top-spec models are more than powerful enough to do this. 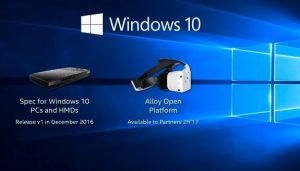 Intel had to get on board the VR hype train with its own product; all of its rivals have already done so and to not have one in 2017 wouldn’t look great to investors or enthusiastic consumers. Alloy will probably morph into another type of VR unrelated to the sort of gaming experiences you get on the HTC Vive and Oculus Rift, unless Intel can massively improve its own graphics processing capabilities. 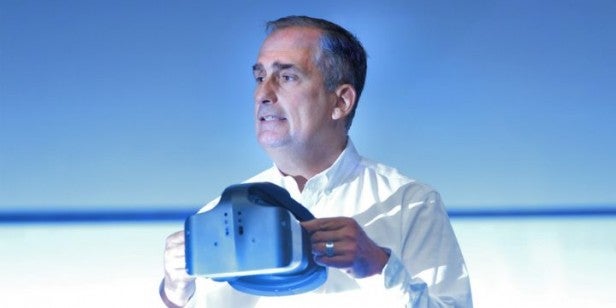 Consumer tether-free VR is apparently set to arrive by the end of the year, according to Intel, and there are few companies better placed than Intel to make it a reality. But, ultimately, it will depend on third-party manufacturers to bring the tech to market.

Pricing hasn’t been announced, but considering the base cost of an Intel NUC, which is likely the basis of Alloy, is over £500, this is not going to be something your or I will be buying any time soon. However, as a concept for developers to work with, it’s very interesting indeed.

Let us know what you think of Intel’s ‘merged reality’ in the comments.