Heroes of the Storm is about to get two brand new heroes from the Warcraft: Varian Wrynn and Ragnaros.

Both characters were available to play at Blizzcon 2016, and I had plenty of time to find out how they perform in practice. The good news is that you won’t have to wait long to try them out either. Varian will be available on test realms from next week, and releases on the week starting November 15. And Ragnaros will show up shortly after, launching at an unspecified date in December.

First up is Varian Wrynn, High King of the Alliance, a well-know character from the Warcraft universe who recently died in the lore. But not one to give up, Wrynn has been brought back to life for a stint in Heroes of the Storm. Here’s what Blizzard has to say about Wrynn:

“The gladiator king of Stormwind City, Varian Wrynn, has lived many lives. His anger sook the orcish hordes; his devotion preserved a nation. By wielding the sword Shalamayne two-handed, split into twin blades, or with a sheild, Varian shifts his combat tactics: charging into melee with multiple opponents, enduring punishment or duelling one-on-one. Whether King Wrynn or Lo’Gosh the Ghost Wolf stands on the battlefield, the prowess of the man remains the same.”

In practice, Wrynn is a warrior or an assassin, depending on how you play him. Blizzard went to great lengths to ensure that Wrynn could function in multiple roles. When I spoke to Heroes devs, I was told this was partly to disrupt the draft system that MOBAs use. After all, how do you pick against a character who could fulfil any number of roles?

Wrynn isn’t very difficult to get to grips with, but his versatile design means you have to choose your talents very carefully, otherwise you risk becoming a jack of all trades, but master of none. In my first game with Wrynn, I chose a healthy mix of different talents, but ended up being disappointed because he didn’t have the impact he would have had I chosen a more consistent build. 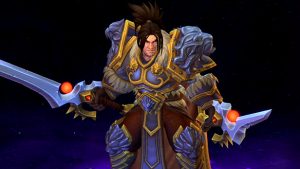 As it stands, Wrynn feels well-balanced. His real selling point is the utility he offers in the way of slows and taunts. If you can master his timing, such as with the Parry ability or the Heroic Strike skillshot, you’ll find great success. But this requires practice, and if you can’t get to grips with Wrynn, you’ll probably find yourself being easily kited by ranged characters.

Next up is Ragnaros, a famed raid boss from the original iteration of World of Warcraft. Ragnaros is quite possibly the most well-known boss from the game, so it’s arguably a surprise he didn’t land in Heroes of the Storm sooner.

“Ragnaros, an elemental as old as the world of Azeroth, has been called to many realms…but rarely one so suited to his destructive nature as the Nexus. As he strives to reduce this new land to ash, Ragnaros hews about with the fiery hammer Sulfuras and takes command of allied and destroyed forts, scourging all who approach him with falling rocks and waves of magma. Though his power is vast, those who summon the Firebird must be prepared to watch the world burn.”

Ragnaros is an assassin, and offers up high damage, utility, and survivability; I’d argue that he has no real failings. That’s going to be a problem when he rolls out because, unless Blizzard tweaks him, he’ll be significantly overpowered as it stands. With an impressive toolkit, Ragnaros is a hero you’ll struggle to perform poorly with once you get to grips with his abilities.

On the matter of abilities, here’s what Ragnaros has to offer:

Molten Core (Trait): Claim an allied or destroyed fort as your new Molten Core. Each of your abilities is temporarily upgraded, and you gain a large pool of health which slowly burns away, though you must remain stationary until your health runs out.
Empower Sulfuras (Q): Your next basic attack is instant, does area damage, and heals you for 20% of the damage you deal.
Living Meteor (W): Call down a meteor nearby; it deals minor damage on impact, and then rolls in the direction you’ve targeted, dealing moderate damage to foes caught in its path.
Blast Wave (E): Briefly ignite yourself or an ally, boosting movement speed by 25% for 1.5 seconds. The boosted target explodes in flame, dealing moderate damage to enemies nearby.
Sulfuras Smash (R): Hurl Sulfuras into the air, dealing moderate area damage when it lands. All enemies in the centre of the impact zone are burned of significant additional damage, and stunned for .5 seconds.
Lava Wave (R): Release a massive lava wave which travels down a targeted lane, dealing high damage to enemies caught in the flames. 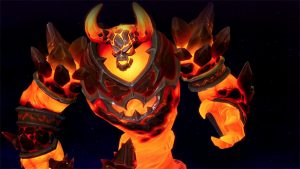 The real selling point of Ragnaros is his Molten Core ability, which allows you to occupy an allied or destroyed fort, and basically turn into a raid boss. You’ll gain supercharged abilities, and you can easily swat enemies for a brief period of time. It’s an awesome adaptation of the Warcraft character, and it works really well in practice – if you time it right, of course. On a couple of occasions, I mis-timed Molten Core and ended up occupying a fort with no enemies to wipe out.

But all of his abilities are both powerful and fun to use. Ragnaros easily wreaks havoc across the field, bringing powerful sieging and impressive burst damage.  He can clear waves with ease (by mashing his Q, W, and E), and his mount is basically a rolling blob of lava. It’s hard not to love him, but he can’t go live as it stands – he’s simply too awesome.

What do you think of Ragnaros and Varian Wrynn? Let us know in the comments.