Everything you need to know about Blizzcon 2016

Blizzard’s 10th annual convention, Blizzcon 2016, is now underway, and the opening ceremony is finally over. There’s plenty of news, so here’s what you need to know about Diablo, Overwatch, Warcraft, Hearthstone, Heroes of the Storm, and Starcraft.

The Blizzcon 2016 opening ceremony was filled to the brim with announcements spanning all of Blizzard’s major IPs. The headline announcements included:

Read on for all the news in reverse chronological order.

On the 20th anniversary of the Diablo franchise, Blizzard revealed that it will be releasing a remake of the original Diablo.

The upcoming ‘Darkening of Tristram’ patch will include the new content, which is rolling out to the PT next week. The art and sound will “harken back to 20 years ago”, featuring original audio and special filters that will make gameplay “pixellated and grainy”. Character movement will be locked to eight directions. It will be available for all of your current characters.

In other news, two new zones will be added to Diablo 3 for anyone who has the Reaper of Souls expansion. You’ll be able to access them through ‘Adventure Mode’.

But wait, there’s more! “Diablo 3 players want a specific character class that’s not currently available,” said Pearce, announcing the introduction of the new Necromancer class to Diablo 3. Necromancers were actually available in Diablo 2, but were unfortunately jettisoned for the latest instalment. 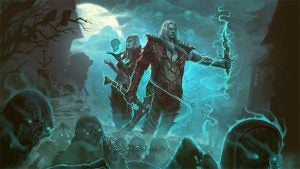 “Necromancer will go on sale next year as part of a character pack,” added Pearce, who confirmed that the new Necromancer class would be available to play at Blizzcon.

The story is based on Gadgetzan’s transformation into a port town following Warcraft’s Cataclysm. We’ll see a darker side to the goblin haven, with a particular focus being put on the shady side streets. The teaser video had a real Bugsy Malone feel to it, with New York accents aplenty.

“Behind it all are three notorious crime families, and they run everything,” said Hamilton Chu, Executive Producer. First, there’s the Grimy Goons, who are brutes and enforcers that offer muscle in Gadgetzan. Chu announced a new card from the Goon set called ‘Piranha Launcher’, a gun that shoots Piranha’s. It costs five mana to use, causes two damage, and has five health. 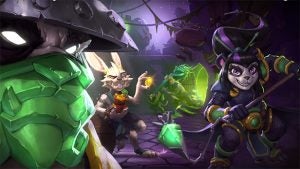 Then there’s the Jade Lotus, who are a sleek syndicate of spies and assassins, according to Chu. “If you get in their way, you might find yourself crossing paths with a Lotus Assassin,” said Chu, describing a new five mana card that summons a minion that stealths whenever it kills an enemy.

And finally, there’s the Kabal, which features spell casters that have been kicked out of their own guilds. “They hide away in secret, brewing their potions and lending magical aid to those in need,” says Chu. A new featured Kabal card is the Kabal Talonpriest, which costs three mana, and has a battlecry that gives a friendly minion an additional three health. It has three attack, and four health.

There’s also a new type of card: the triclass card. In the Kabal, for instance, there are mages, priests, and warlocks. An example of a triclass card is the Kabal Courier, which can be played in any mage, priest, or warlock deck.

The new expansion is expected to land in early December.

Heroes of the Storm – New Brawl, plus Varian Wrynn and Ragnaros as heroes

Blizzard announced a brand new brawl for Heroes of the Storm: Blackheart’s Revenge.

“I’m excited to introduce you to Blackheart’s Revenge,” said Kaéo Milker, Production Director on Heroes of the Storm. According to Milker, each team has its own win condition. Only one team has a core, and teams have to either attack or defend it. Blackhearts Revenge will become available on November 15 this year. 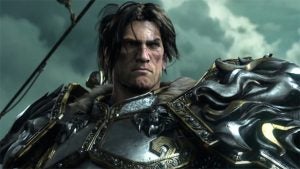 “Varian is our first multi-class hero,” explained Milker, saying that he can be either a tank or assassin, depending on the talent choices you make in the game. There are six different ways to pay Wrynn “assuming to the needs of your team”.

And Ragnaros has “larger than life abilities”, including hurling your hammer and releasing lava flows. You can also use the trait ‘Molten Core’ to take over a fort, whether it’s standing or not, and “become gigantic”.

“As Ragnaros, you become the raid boss,” added Milker, who said you may very well wipe the enemy team.

Both heroes are available to try out at Blizzcon, but that’s no good for fans at home. So the good news is that Varian hits test realm next week, and releases the week of November 15, with Ragnaros following close behind in December.

Morhaime then announced the Overwatch League, a new competitive league for Blizzard’s first-person shooter. The OL will see players trying out to join teams based on around major cities. Players will given base salaries, and will compete for “fortune, fame, and glory”, apparently. To join, players will be tested by professional coaches to make sure they have the requisite mouse-and-keyboard skills. 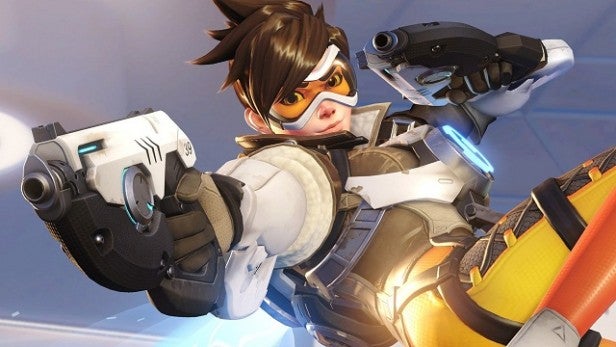 “Blizzard has been making competitive multiplayer games from the beginning,” said Morhaime. “We designed Overwatch from the ground up to excel as a competitive game, and now we’re looking for the top players in the world and the team owners, who will form the Overwatch League.”

The first Overwatch League season will “begin next year”, according to Morhaime, who declined to give a specific launch window.

“The Overwatch League represents not only the pinnacle of Overwatch competition, but also a genuine career opportunity for the most skilled Overwatch players,” said Morhaime. “We’re building a league that’s accessible to players and fans, sustainable, and exciting for everyone involved.”

The next topic of conversation was artificial intelligence, with Oriol Vinyals, from Google’s DeepMind team, taking the stage.

“We’ve started to focus our research on a new environment,” said Vinyals. “Today I’m very excited to announce our collaboration to open up StarCraft 2 to researchers around the world.” 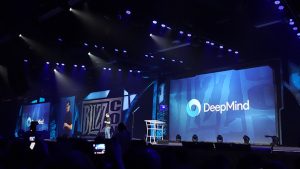 Blizzard is going to release its API early next year, allowing researchers to build and train their own AI agents to play StarCraft 2.

“I’m so proud that Oriol and his team have chosen StarCraft 2 for their work,” said Morhaime. “We’re all cheering on the DeepMind team.”

“There you have it. Sombra will be the next hero joining the cast of Overwatch. I’m sure no one saw that coming,” said Mike Morhaime, President and CEO of Blizzard. He explained that Sombra is a stealthy, offensive infiltrator who can “hack enemy abilities” and “turn the tide of battle in subtle and not so subtle ways”. 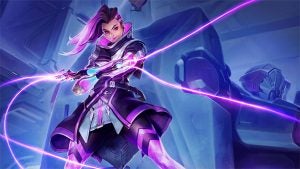 After many months of teasing, the addition of Sombra brings the total number of Overwatch heroes up to 23 – from an original 21.

Prior to the reveal, Blizzard had extensively teased Sombra using an ARG – alternate reality game – that saw fans of Overwatch working to solve mysterious clues hidden all over the internet. In summer, it became reasonably apparent that a new hero was in the work and, a week before Blizzcon, actual character artwork for Sombra was leaked out online.

Morhaime also announced a new Oasis map, which is a high-tech city terraformed in the Arabian desert. There’s also a new feature called Arcade that features 1v1 and 3v3 game modes, and exclusive maps – including one called ‘Ecopoint Antarctica’.

Sombra and the new features – minus Oasis – will be available next week on the public test realm.

There’ll be plenty of panels and live sports action, but here are the main events you should look out for. 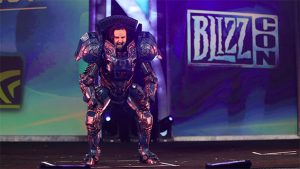 You can find the full schedule here.

To watch Blizzcon, you’ll have to fork over cash. A Blizzcon 2016 Virtual Ticket will set you back £24.99, and can be purchased below:

You’re limited to one ticket per Battle.net account, and the content is only available in English. You’ll be able to watch replays of keynotes for up to two weeks after the event, which is handy for Brits who don’t want to stay up until 2am. And if you purchase a ticket, you’ll also be eligible to buy a Blizzcon 2016 Goody Bag – huzzah! 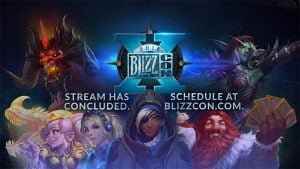 What would you like to see from Blizzcon 2016? Let us know in the comments.