Google has developed yet another way for users to send messages to each other, as if the company didn’t already offer enough. Here’s all the latest news, or read on for our full Google Allo tips and tricks guide.

In a bid to further promote the recently launched Allo messenger app, Google has now debuted a desktop version that can be used inside a web browser. The news was announced this week Google’s Head of Product for Allo, Amit Fulay.

He posted the news to Twitter, confirming that it would be available on the Google Chrome browser initially:

To access Allo on desktop, you’ll need to pair your mobile Allo service to the web client. This involves scanning a QR code on the internet using the Allo mobile app – a process that is only available on Android right now. It’s not clear when iOS will get similar functionality.

Importantly, the web client is not independent from your mobile device. The web app is effectively mirroring content from your phone, so if your phone dies (or you simply turn it off), the web app won’t work either.

Google Allo is arguably Google’s flagship mobile messaging app, and was announced at the Google I/O developer conference in May last year. However, it didn’t actually go live to the public until September 21, 2016.

The app is just one part of an increasingly confused ecosystem of messaging systems operated by Google. For context, there’s Allo for standard text messaging, and then Duo, which is a Facetime-style video-calling app. Then there’s Hangouts, which is also a messenger that used to be able to handle SMS functionality too – although additional feature was recently removed. 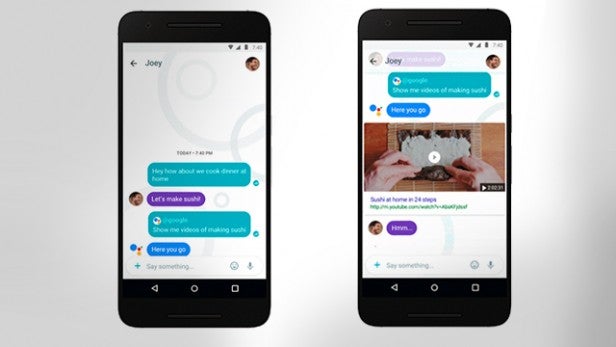 Google Allo is Google’s latest chap app, and the main selling point is that it integrates the company’s Google Assistant AI helper. It’s the same technology that’s at the centre of Google Home – the firm’s Amazon Echo rival.

The idea is that you don’t have to leave the chat app to access information through Google. Now, it’s simply a case of asking Google Assistant direct questions, and issuing commands such as ‘show me pictures of the great Yeezus’.

The results will pop up directly in the Allo thread, and you can bring the assistant into conversations with your friends simply by starting a sentence with ‘@google’.

You can ask for things such as movie times, restaurant suggestions, flights, hotel reservations from within the conversation. You can also ask for updates on the weather, news, and sports results. Just use the @google tag at the beginning of your sentence.

Google has a list of things you can ask the Assistant here. You’ll also need to connect your Google account in order to use Google Assistant properly. To do this, Tap the Menu (three horizontal lines) icon then go to Settings > Google Account. It’s then just a case of tapping the account you want to use, then tapping OK.

Now, here are some of our favourite things you can get Allo to do.

If you like the idea of smart replies, try to use them as much as possible as the system learns over time. As Google, rather bleakly puts it: “Whether you’re a “haha” or [an emoji] kind of person, Smart Reply will improve over time and adjust to your style”. 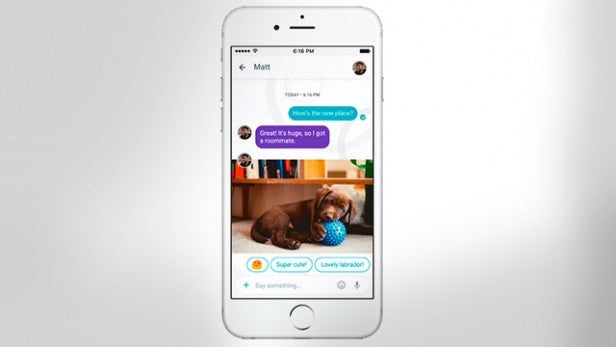 But it doesn’t end there. Allo’s got some clever photo recognition tech built in, so if your friend sends you a picture of something, the app will often be able to recognise what’s in the image and suggest responses based on that information.

We shudder to think of the inevitable attempts to provoke Google Assistant’s crudeness this feature will produce, but photo recognition will undoubtedly save you time, especially if you invest in picking the right responses to tailor the feature to your personality over time.

One big feature that looked set to bring a load of WhatsApp and iMessage users over to Google’s alternative app was the much touted SMS support.

After all, who doesn’t know the anguish that comes with having to venture back into our SMS apps whenever we want to send a message to our parents who seem incapable of understanding how to use WhatsApp even though it’s exactly the same as texting.

The dream of contacting your tech-challenged relatives through the same app as all your friends looked like a real possibility when Allo was first introduced at Google I/O 2016. However, it seems things are slightly more complicated than simply being able to text directly from Allo. 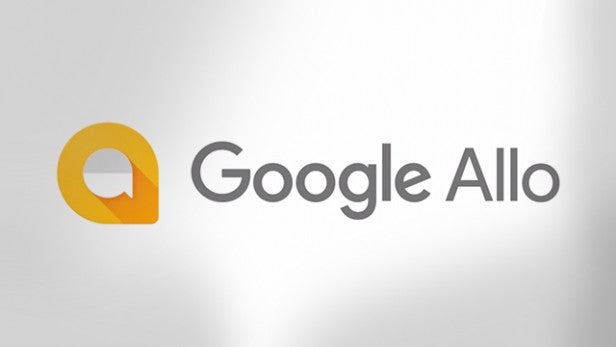 The SMS element of Allo essentially works like this: If you tap on a contact that has yet to sign up to Allo, you’ll be informed that any messages sent to that contact will be through SMS. Once you send the message, the recipient will either receive a notification from Google Play Services (if they’re an Android user), from which they can respond to the message, or, if they’re on iOS, they’ll get the following via text:

[Your full name] ([Your phone number]) added you on Google Allo to chat. Text HELP to learn more or STOP to unsubscribe. https://g.co/AlloSMS

The message comes from a five digit number, and after this initial message, you’ll be able to keep texting the person. Messages will continue to arrive from the proxy number, however, and any time the person responds, the reply will appear in Allo. You also can’t set Allo as your default SMS app.

All of which seems a tad confused, but we’re hoping Google makes the whole thing similar with a future update.

Since WhatsApp, everyone know the tick system all too well. One tick for sent, two for delivered, and a couple of blue ticks for read. As such, you may be wondering whether Allo has a similar system and how it works.

As with WhatsApp, the ticks will appear on the right side of each message, and when in a group chat, the ticks will only update when all members of the group have read the message.

It’s also worth noting that the tick system won’t work if you’re sending messages via SMS to non-Allo users.

Despite WhatsApp’s recent privacy debacle, where it announced it would begin sharing user information with Facebook, owners of WhatsApp, there is one big privacy benefit to using Zuckerberg’s messaging platform – namely, end-to-end encryption.

End-to-end encryption means that messages are encrypted as soon as they leave your device until they reach the recipient, making it near impossible for any third party, including the company itself, to intercept the message and see what’s being said. 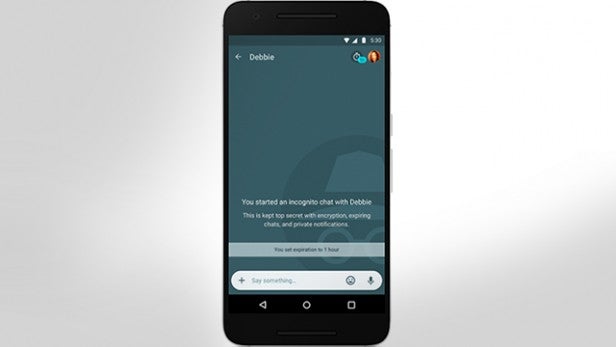 Unfortunately, Allo does not encrypt messages in this way by default. Google is using ‘industry standard technologies like Transport Layer Security’ for standard messages. Which is better than nothing, but if you want the added security that comes with end-to-end encryption, you might consider switching on Allo’s Incognito mode.

Just as with the same setting in Chrome, Incognito makes things a whole lot more secure and private. Not only will messages benefit from end-to-end encryption, notifications for Incognito messages are much more discreet – revealing less information than a standard Allo notification.

To turn on Incognito mode, tap the New Chat icon then tap the incognito icon (the mini fedora and glasses). Then, just tap the name of the person you want to chat with. If you want to turn off notifications completely, just go to Settings > Notifications.

On top of that, you’ll be able to set messages to expire after a set time. To do this, once in an Incognito chat, tap the timer icon in the top-right corner. You should then be able to choose a time limit for how long messages exist: Never, 5 seconds, 10 seconds, 30 seconds, 1 minute, 1 hour, 1 day, or 1 week. The setting will be the same for you and the recipient.

Unfortunately, when in Incognito mode, none of the smart reply or Google Assistant features will work, as Google will be unable to read what’s being said – due to the end-to-end encryption. It seems then, you’ll have to make a choice between being able to use Allo’s most innovative features, or ensuring your privacy – which isn’t all that great, really.

Haven’t you heard? You can now draw all over that photo of your friend’s kid, or add a posh hat to that shot of your dog. It’s all very SnapChat-esque, and it’s another feature Google are keen to play up.

If you feel like defacing an image before sending it to your mates, tap Add (plus sign) from within a chat, then tap the Insert Photo icon (square with mountains inside). Next, choose the image you want to draw on or take a new photo using your phone’s camera. You’ll then be able to tap Edit to start working on your masterpiece. 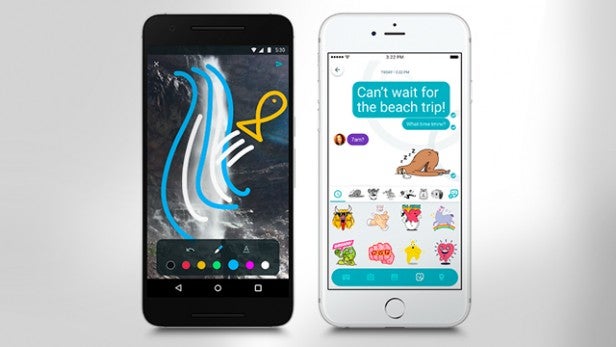 Within the Edit screen, you’ll be able to use the Marker tool to draw using your finger in several different colours, the Text tool to add a sweet caption to the image, and the Undo tool to cancel out any mishaps. Once the artwork is complete, just tap the Send icon.

And if that’s not enough fun for you, Google’s new assistant wants to play a few games with you. That’s not quite as sinister as it sounds. The AI is capable of posing questions as part of a trivia game, or there’s the emoji game, where you have to guess the title of a film based on a series of emojis the assistant provides.

In a one-on-one chat, just type ‘Play trivia’ or ‘Play the emoji game’. In a chat with a friend, try typing the same but adding ‘@google’ to the beginning of the sentence.