A website has emerged from Truly Exquisite featuring a 24K Gold PS5 at an eye-watering price, although that’s not even the most interesting tidbit of information we’ve garnered from it.

According to the premium retailer, pre-orders for the PlayStation 5 will open on Thursday, September 10th. The ultra fancy console in question will retail for a rather obscene £7999/8099, which is probably what we should expect from a console coated in real gold.

“The long awaited and much anticipated Sony Playstation 5 just got even better! Truly Exquisite are proud to announce that we bring to you yet another release first…this time it will be in the form of the brand new Sony PS5…available to buy in luxury 24K Gold, Platinum and also 18K Rose Gold finishes. We can not wait to start custom making these true beauties,” reads the retail listing.

However, the vanilla model will likely be much more affordable, and knowing that pre-orders are set to open on September 10, it’s possible that Sony could be announcing the price at the very same time. A release date also remains a mystery, although all signs point to it being in November around a similar time to Microsoft’s next-gen offerings. 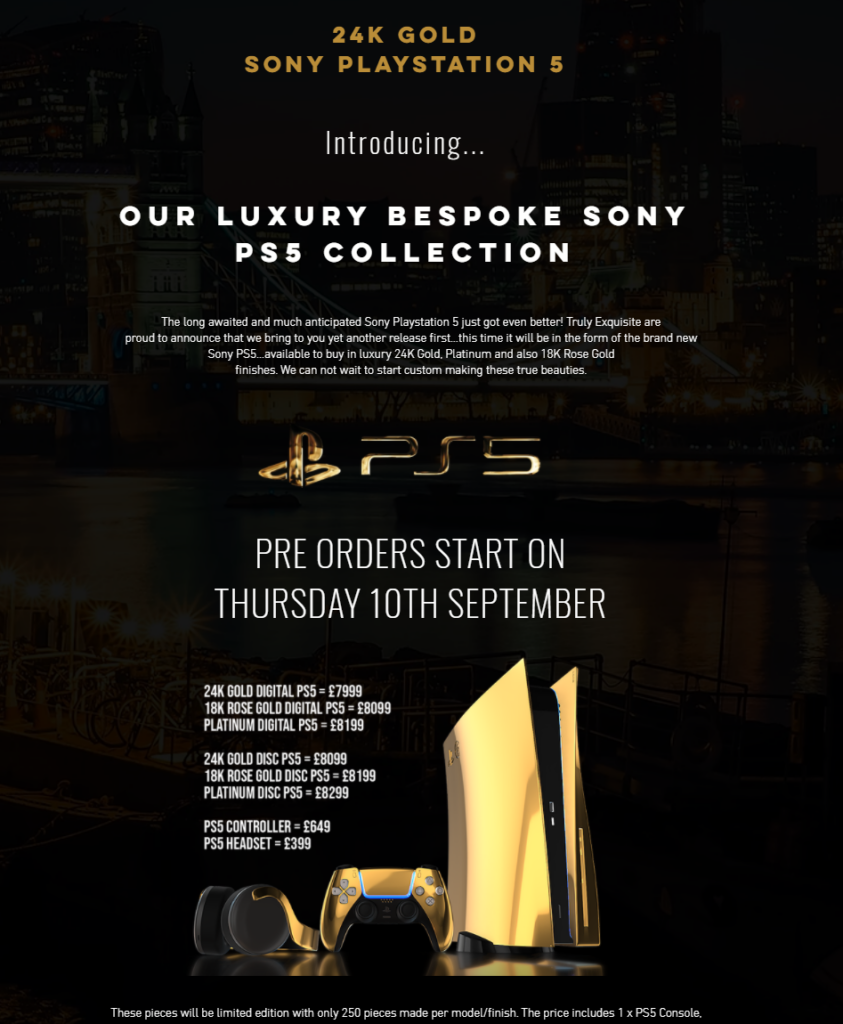 Microsoft arguably beat Sony to the punch earlier today with the reveal of Xbox Series S, a small mid-tier console which will launch at an affordable £249 while offering 1440p resolution and variable refresh rate performance alongside a number of next-gen features such as real-time ray tracing and faster SSD loading times.

Given how cheap this console is, Sony might want to come out swinging if it hopes to dominate the coming generation. We can picture the PS5 being anything from £399 to £549, although the price point for the physical and digital editions will likely vary by a significant amount given the cost of a 4K blu-ray drive. Here’s hoping all will become clear in the coming days.