Unveiled at Sony’s PS5 ‘Future of Gaming’ event, Pragmata is an upcoming next-gen adventure, heading to Xbox Series X as well as PlayStation 5 and PC. We don’t know much about the game yet, but it’s shaping up to be an intriguing sci-fi adventure from Capcom.

While details are currently thin on the ground, Trusted Reviews has compiled everything you need to know about Pragmata including all the latest news, gameplay, release date, next-gen and more.

Pragmata developers – who is making it?

Pragmata is being created by Capcom, who you may recognise as the minds behind such franchises like Resident Evil, Monster Hunter World and Devil May Cry. This is one of the Japanese company’s first new IP in years, and will likely be a huge blockbuster for next-gen consoles. It remains unclear exactly which genre Pragmata will occupy, but it certainly looks ambitious. 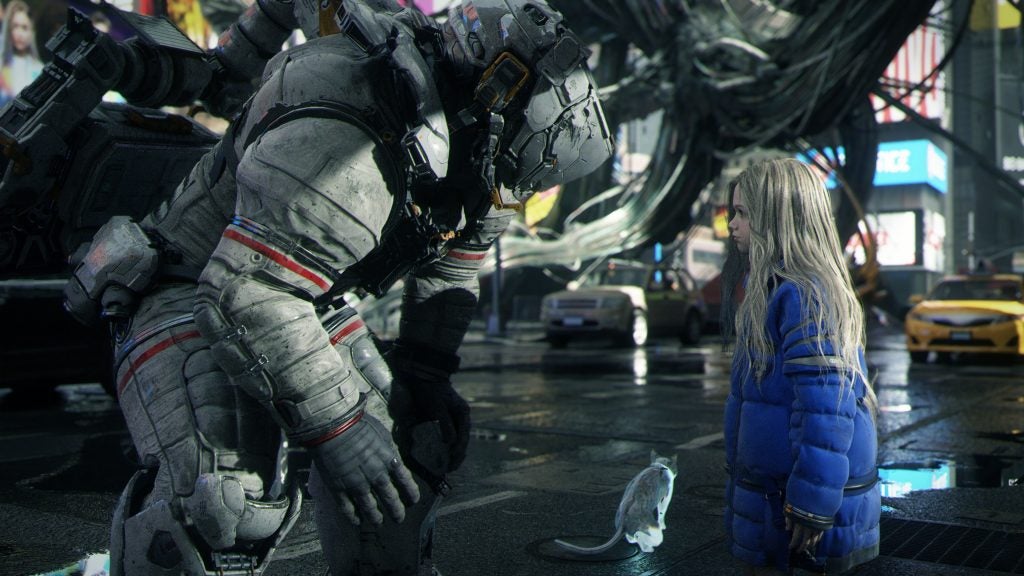 Pragmata plot – what is the story about?

We know very, very little about the plot of Pragmata so far. A cryptic reveal trailer left us guessing at all but a few key plot points.

The trailer focuses on a spacesuited man and a young girl, who find themselves in an abandoned – possibly post-apocalyptic – Times Square, in New York City. He is using some sort of scanner which reveals, seemingly, where the young girl has recently passed by. He then encounters the girl, who is kneeling next to a holographic cat.

At one point a satellite falls through the sky – which cracks, acting like a glass screen, before the satellite becomes visible. This seemingly destroys the gravitational field around the suited man and the young girl, who fly up into the air. The suited man deploys a sort of wire-based force-field to protect them from the oncoming satellite.

They then fly out of the earth’s atmosphere, into space and the trailer finishes with the two characters stood on the moon’s surface, looking at Earth. There’s a lot going on and much to piece together, but no clear queues in terms of the plot. We’d expect nothing less from the creators of Resident Evil and Monster Hunter.

Pragmata trailer – how does it look?

An announcement trailer was aired at the PlayStation ‘Future of Gaming’ event recently. It doesn’t give too much away, but definitely got us intrigued.

Pragmata release date – when is it coming out?

Pragmata gameplay – how does it play?

In terms of gameplay, we are again left guessing, but it seems the relationship between the trailer’s protagonists will be key. We imagine a less creepy version of Norman Reedus’s ‘Bridge Baby’ from Death Stranding – with key gameplay mechanics focusing on the way these two isolated characters work togeteher.

Capcom have said that the title will be set on the moon, so it could be about those characters building a new home, away from the empty dystopian earth we see in the trailer. For now, we can’t be sure. Stay tuned for more updates on all things Pragmata.