The Samsung Galaxy Fold hasn’t even hit shelves yet, but all eyes are already turning to the company’s next foldable phone effort, with new images imagining what the Galaxy Note 10 might look like if it went with a similarly radical design.

New renders from Dutch gadget blog LetsGoDigital envisage what the Galaxy Note 9 successor would look like as a foldable device – and it’s safe to say they’re very pleasing on the eye.

Rather than having a single fold, these Galaxy Note 10 renders show a device with two hinges, making for even more display options than the forthcoming Galaxy Fold. 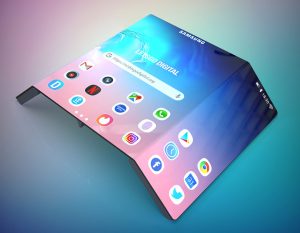 They’re apparently based on a collection of Samsung patents for foldables accumulated over the years, with LetsGoDigital explaining how they foresee such a concept taking shape:

“The foldable phone from Samsung has a large flexible screen that can fold twice. Once expanded you have a tablet size screen at your disposal. If you fold the device, the screen remains on the outside. You curl the screen around the housing. The entire device then consists of a display, both the front and rear.”

All of which is tantalising stuff, but we’d be extremely surprised if Samsung opted for such a radical redesign in its popular Galaxy Note line when it has only just brought a foldable to market. The jury is still very much out on whether the form factor will take off, leaving many to question whether it really does represent the future of mobile, or is just a passing fad.

The Galaxy Fold will be released in the UK on Friday, May 3 and is available exclusively on EE. You can pre-order the device from April 26, either through EE or directly from Samsung – but it will set you back a pretty penny, starting at a hefty £1799.

Would you buy a Galaxy Note Fold or do you want to see a more traditional Galaxy Note 10 design? Let us know @TrustedReviews.