Three weeks have passed, so it’s time to get stuck into the Fortnite Season 6 Week 4 challenges. This season we’ve seen dancing, murder, and a fair bit of racing. While there’s less dancing this week, instead you’ll be searching for ammo and shooting clay pigeons, there’s still a bit of murder, only this time near corrupted zones. It wouldn’t be Fortnite if there wasn’t at least a small amount of killing to be had.

Fortnite Season 6 Week 4 Challenges: Use a Port-a-Fort or Port-a-Fortress in different matches 0/5

This sounds easy enough, but it all comes down to luck. Your highest chance of finding either Port types is in chests and supply drops. If you’re going for chests, aim for somewhere with a high chest chance, like the blue house in Salty Springs or corrupted areas. For the supply drops, you can either play until end game, or head into 50v50, the latter of which offers more supply drops over a smaller area.

Head to a named location, find an ammo box, and acquire its contents. Simple stuff, really. Just be sure to search every room in every house or building you come across and this should pop without too much fuss.

Fortnite Season 6 Week 4 Challenges: Ring the doorbell of a house with an opponent inside in different matches 0/3 (HARD)

If you’ve played since the most recent patch, you may have noticed the addition of doorbells. For this challenge you’ll need to ring three bells across three separate matches. The key here is landing in a highly populated area. Salty Springs, Pleasant Park – anywhere with houses will work.

The other thing to keep in mind is to delay your landing slightly. Instead of landing as quick as possible, land later. That way you’ll give an unwitting player the chance to enter a building first, leaving you free to knock, door, run. 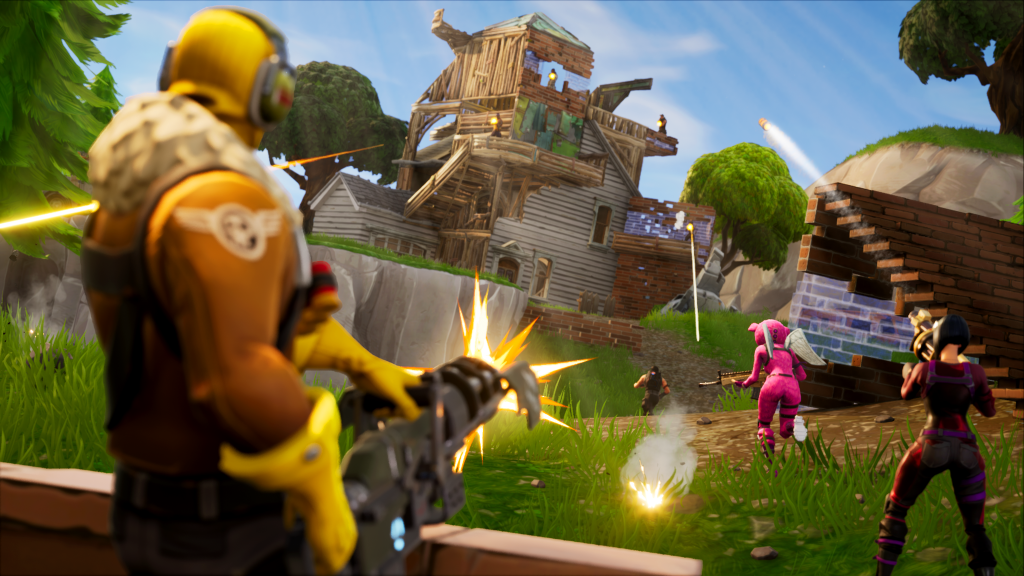 This is another “land at” staged challenge. Last week had five locations, and this week is no different. Once you’ve landed at Greasy you’ll need to head to the following areas below in separate matches. If you’re doing this in 50v50, you don’t need to land as soon as you get off the battle bus. If head to the area, build a ramp, then jump off and activate your glider, it’ll still count.

Well if this isn’t the single greatest challenge ever conceived, I don’t know what is. For this you’ll need to head to every default’s favourite landing zone, Tilted Towers. Keep an eye out for the slim building with a – spoiler! – clock tower on top. Land there do a little dance, make a little love, and get down tonight to complete this part of the challenge.

While the first part of this challenge was nice and obvious, the next two sections aren’t.

For the second stage of the challenge you’ll need to head to Lucky Landing. In the middle of the zone is a four-walled structure, and in its centre, a massive pink tree. So long as you keep your eyes open as you glide in, it’s pretty hard to miss. Just keep in mind there’s often a chest buried directly below the tree, so land fast and emote, else others may chop down your challenge.

You’d be forgiven for hearing the word throne and thinking of the new haunted castle area. What this actually refers to, however, is the kind of throne you sit on to relieve yourself. I.e. A toilet.

Head on over to Flush Factory, the home of toilets in Fortnite, and directly in front of the main warehouse is a giant toilet. Again, you won’t miss it. You may need to build up to it, but once you’ve danced on this loo that’s this challenge complete.

Fortnite Season 6 Week 4 Challenges: Get a score of 3 or more at different Shooting Galleries 0/5 (HARD) 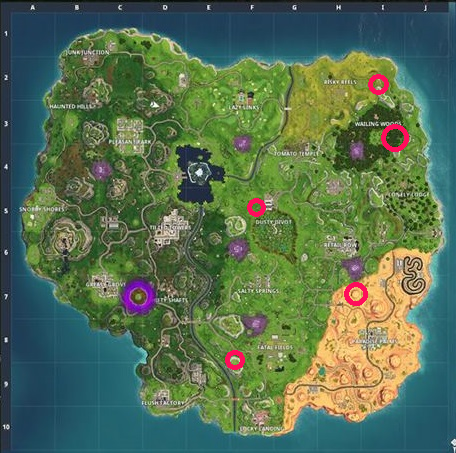 If you completed this challenge last season, you’ll kind of know what you’re doing. The main difference this time around is you’ll need to stand on a small platform at shoot at pop-up targets. Just make sure you stand still and don’t walk off the platform and this one should fly by.

Fortnite Season 6 Week 4 Challenges: Eliminate opponents near any of the corrupted areas 0/3 (HARD)

You’ve probably seen these already, but corrupted areas are the purple sections of the map. Each area contains between one and three chests, so the trick here will be landing before anyone else and snagging all the good loot. Don’t worry about getting over-powered loot, anything that fires will do, so long as you grab the gun first all your opponent can do is swing their pick wildly as you blast them into next-week.

If this is your first time on Trusted Reviews, feel free to check out the rest of our previous Fortnite Season 6 coverage below, including a challenge guide for every week so far, new starter packs, and much, much more.

You can also check out our Fortnite Season 6 hub for all the latest additions, patch notes, and game-changing weapons.